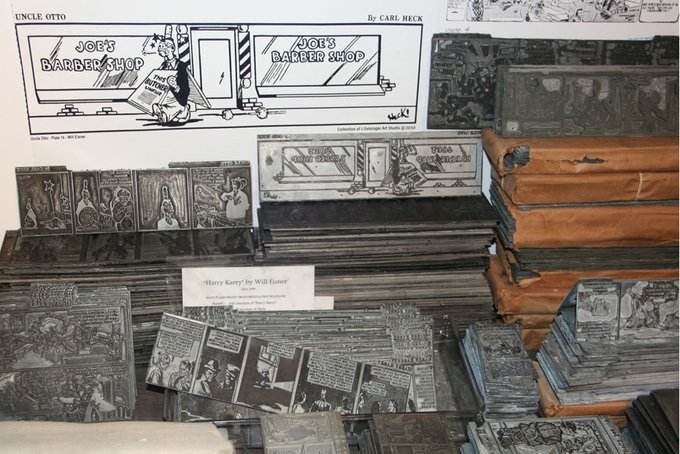 Getsinger purchased a 10,000-piece collection of cartoon printing plates from the 1930s and discovered among them two cartoons, "Harry Karry" and "The Uncle Otto," spread among 100 cartoon strips. They were attributed to the pen names Carl Heck and Willis B. Rensie, but the latter name, Getsinger realized, is "Eisner" spelled backward.

The strips are thought to have been created during Eisner's teenage years and are significant examples of early serialized storytelling, illuminating Eisner's evolution as an artist. Eisner is one of the first well-known and influential American comic book authors. He passed away in 2005.

Locust Moon, a West Philadelphia comic shop and art gallery, now hopes to raise funds to publish these strips as a print book titled "The Lost Work of Will Eisner." According to their Kickstarter campaign, Eisner's longtime publisher Denis Kitchen has signed on to write an introduction, and mock-ups of the cover and interior layout have already been designed. Locust Moon Press, the publishing arm of Locust Moon, previously found success funding its publishing efforts through a campaign for the "Little Nemo: Dream Another Dream" comic book, which crowdfunded $150,000.

You can find the Kickstarter for the Eisner comic book here. The team at Locust Moon hope to raise $20,000 to cover printing, shipping and fulfillment costs.