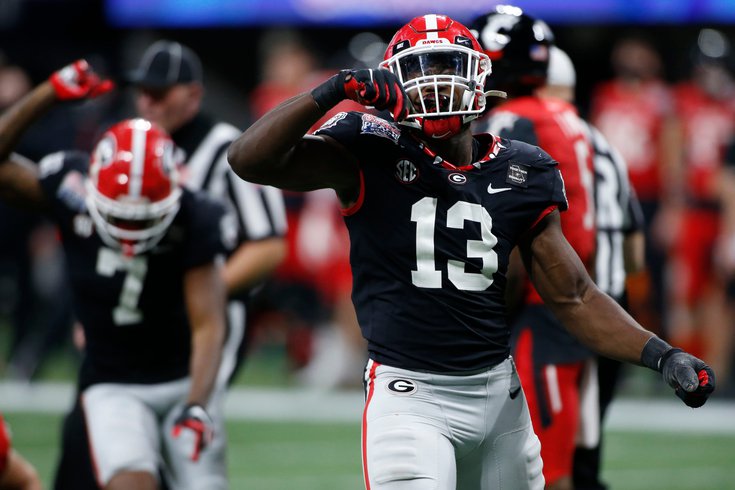 On Day 1 of the 2021 NFL Draft, the Dallas Cowboys and Washington Football Team each picked a couple of linebackers, while the New York Giants traded back and then took a gadget player. Here's what the Eagles' rivals did on Day 2.

• Pick 44: Kelvin Joseph, CB, Kentucky: Joseph has highly impressive athleticism, notably his 4.34 40 time, but he comes with major character concerns. He originally enrolled at LSU, but was suspended for their bowl game in 2018, before transferring to Kentucky and missing the 2019 season as a result. In 2020, he had 4 INTs in 9 games.

Late in the 2020 season, Joseph told head coach Bob Stoops that he wanted to sit out a game, and Stoops suggested he just opt out for the season, via aseaofblue.com.

“He came in and visited with me after my press conference today,” Stoops said. “Kelvin, he’s a good young man and I appreciate what he did for us. He just didn’t, I don’t know how to phrase it. He didn’t really want to opt out but he didn’t want to play this week. I can’t just have him out there standing around saying, ‘I’m not playing in this game.’ That’s not how we’re going to do this at Kentucky.”

Lol. The Cowboys have a long history of taking big risks with their second-round picks on talented players with serious medical and/or character concerns. Prior examples include guys like Trysten Hill, Jaylon Smith, Randy Gregory, etc.

The Cowboys desperately needed help at cornerback, and Joseph has the talent to compete right away for a starting job.

• Pick 84: Chauncey Golston, DE, Iowa: Another tweener. 6'5, 269 DE who can move inside on some obvious pass rush downs. Like Odighizuwa above, production wasn't there in college. 12 sacks in 36 games.

• Pick 99: Nahshon Wright, CB, Oregon State: I won't pretend to have ever heard of this guy. The Athletic's Dane Brugler had Wright as his 38th ranked CB, and either a seventh-round pick or a priority undrafted free agent. NFL.com's Lance Zierlein also had him as a seventh rounder or PFA. The Cowboys took him with a top 100 pick, likely because his length is appealing for a Cover-3 scheme. 😬

At 6'4, 183, Wright is a long, but super skinny CB with unappealing athletic measurables.

In case you haven't noticed the theme here, all five of the Cowboys' picks so far (including first rounder Micah Parsons) are defensive players. Is that smart, or an overcorrection to fix their trash defense?

• Pick 50 (trade back): Azeez Ojulari, EDGE, Georgia: If Ojulari is healthy, he's a steal at pick 50, because (a) he would have easily been a first-round pick otherwise, and (b) he's a nice fit for the Giants' defensive scheme. In 2020, Ojulari was highly productive, as he had 9.5 sacks and 4 forced fumbles in 10 games.

However, he has a reported potentially degenerative knee issue.

• Pick 71 (trade up): Aaron Robinson, CB, UCF: Robinson played inside and outside for UCF. He's thought of as a tough, versatile player, but he only had 1 career INT in college.

• Pick 51: Sam Cosmi, OT, Texas: The Football Team grabbed Cosmi in the middle of a run on second-round offensive linemen, in which 10 were taken. Cosmi is sort of a high floor, low ceiling type who can fill the Football Team's gaping hole at LT, but isn't likely to be earning any All Pro nods.

• Pick 74: Benjamin St-Juste, CB, Minnesota: After the run on offensive linemen, there was a run on quarterbacks that the Football Team may have wanted to get in on, in which Kyle Trask, Kellen Mond, and Davis Mills all came off the board in a four-pick span in the 60's. Instead, they add St-Juste, a long, 6'3 press corner who doesn't run that well, but is well-equipped to handle bigger, physical receivers.

• Pick 82: Dyami Brown, WR, North Carolina: Brown is a productive, down-the-field the receiver who caught 105 passes for 2133 yards (20.3 YPC) and 20 TDs the last two seasons in a talented North Carolina offense. I love the highlight at the 3:00 mark below. He knows he had one-on-one coverage, and he calls for the ball pre-snap, then dusts 2020 first-round pick A.J. Terrell.

Brown gives the Football Team another young receiver to develop along with other young guys like Kelvin Harmon, Antonio Gandy-Golden, and Cam Sims, alongside the already established Terry McLaurin, Curtis Samuel, and Adam Humphries. I kinda like that mix of receivers.