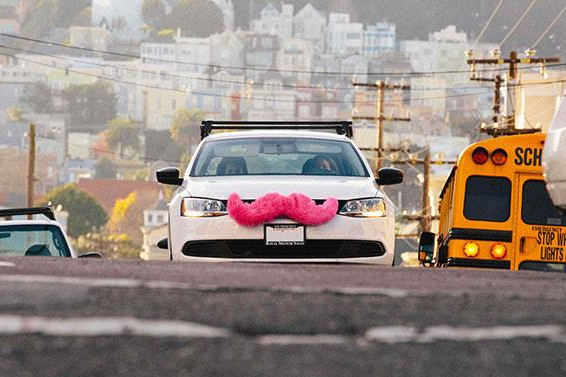 According to Philly.com, Lyft's first night of operation was a direct challenge to the PPA, as permitting for hail-by-app ride-share operators still remains fuzzy in the city of Philadelphia.

Last fall, the Pennsylvania Utility Commission extended permits to ride-share operators throughout much of the state, with the condition that drivers clearly mark their vehicles to identify the company they represent. In Philadelphia, however, the PPA maintains oversight above the Commission's ruling, leaving ride-share drivers little choice but to avoid identifying themselves.

Thus far, Uber drivers have not been displaying a "U" on their vehicles in Philadelphia as they have elsewhere in the state. This decision has proven costly, as 29 of the company's drivers have been stopped, fined and impounded by the PPA.

Lyft, out of concern for safety and rider convenience, said it would comply with the state's regulation for cars to be clearly marked. Drivers last night were mandated to adorn their vehicles with a glowing mustache on the dashboard (replacing Lyft's previous pink mustaches on the grille, pictured above).

While the PPA warned the company it would cite its drivers and impound their vehicles, Lyft countered that it would pay for drivers' fines, impoundment costs, and legal fees (a nice gesture, though overall the status of ride-share employees has lately come under federal scrutiny).

As of last night, the PPA went undercover to hire Lyft drivers in at least two separate cases, impounding one vehicle at the airport and citing another driver, a licensed limousine owner, with threats to have his license revoked. Fines and impoundment costs alone can reach up to $1,750.

Although the Taxicab, Limousine and Paratransit Association, regulated by the PPA, is eager to keep ride-share operators off Philadelphia's streets, the city appears to favor their integration.

With ride-share drivers flouting the PPA's authority and mounting pressure from the city, greater transport competition on Philadelphia's streets may soon be in gear. Lyft drivers can then wax their glowing mustaches with full legal protection.