By Pat Ralph
PhillyVoice Staff
Performances Made in America
from 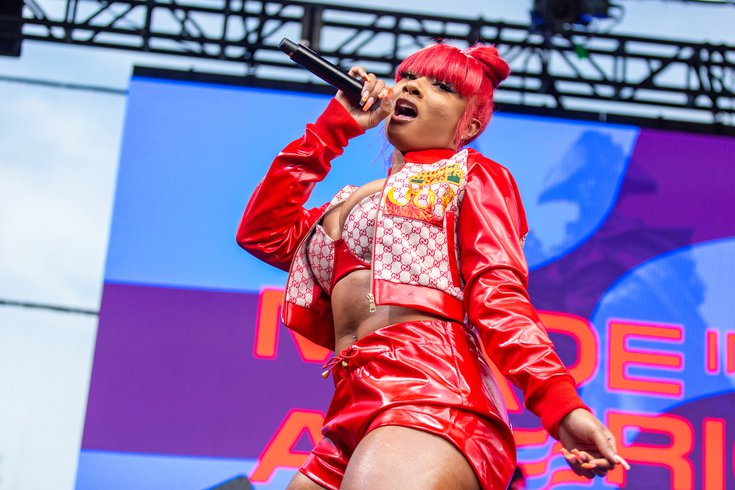 The 2021 Made in America Festival performers will include Justin Bieber, Lil Baby, Megan Thee Stallion, Roddy Ricch and Doja Cat. The two-day music festival takes place on the Benjamin Franklin Parkway in Philadelphia during Labor Day weekend. Above, Megan Thee Stallion performs during the 2019 MIA.

Pop star Justin Bieber will make his Made in America Festival debut this year when the annual two-day music event returns to Philly over Labor Day weekend.

Lil Baby, Megan Thee Stallion, Roddy Ricch and Doja Cat will also headline the 2021 festival, which is scheduled for Sept. 4-5 along the Benjamin Franklin Parkway.

Bieber's Made in America Festival appearance comes on the heels of the release of his latest album, "Justice," in March. The two-time Grammy Award-winner is scheduled to return to Philly next June to perform at the Wells Fargo Center as part of the tour for his new record.

Like Bieber, Lil Baby's first appearance at the multi-stage music festival will come after releasing a new album this month with Lil Durk titled "The Voice of the Heroes."

This year's Made in America Festival will not be the first for several artists. Megan Thee Stallion, Roddy Ricch and Freddie Gibbs all performed at the event when it was last held in 2019. A$AP Ferg was at Made in America twice in 2016 and 2018.

This lineup is just the beginning…
Grab your tickets to the 10th Made in America Festival before it’s too late. https://t.co/SBji1Vol1a pic.twitter.com/S4OGC34Ubs

The 2021 event will benefit the ACLU of Pennsylvania as its official charity partner. A portion of the net proceeds will also go toward the REFORM Alliance.

Two-day passes for this year's festival are available for as low as $150 on the event's website.

Made in America has been put together by Jay-Z and Roc Nation, alongside Live Nation, on Labor Day weekend in Philly since 2012. The event has generated more than $135 million in economic impact for the city, festival organizers said.

The 2020 Made in America Festival was called off due to the COVID-19 pandemic and civil unrest across the country last summer.

Festival organizers announced last month that the event would return this Labor Day weekend after a one-year hiatus. Tickets to last year's concert are valid for this year's festival.

The COVID-19 pandemic all but shut down concerts for the past year, forcing musicians and venues to postpone or cancel performances.

But with restrictions eased and more people getting vaccinated, many artists and event spaces are preparing for live shows to return in the near future.

Along with Bieber, artists such as Eric Church, Genesis and My Chemical Romance are scheduled to perform at the Wells Fargo Center over the next year.

Megan Thee Stallion and Roddy Ricch will make their way down to Delaware at the end of September to perform at the Firefly Music Festival. The four-day event will also feature Billie Eilish, The Killers and Lizzo.

The inaugural Barefoot Country Music Fest is coming to Wildwood this August. The four-day event on the beach at Morey's Piers will feature 30-plus artists, including Carrie Underwood, Zac Brown Band, Dan + Shay and Lee Brice.

Bruce Springsteen announced last week that he would be reviving his Tony Award-winning Broadway show this summer.