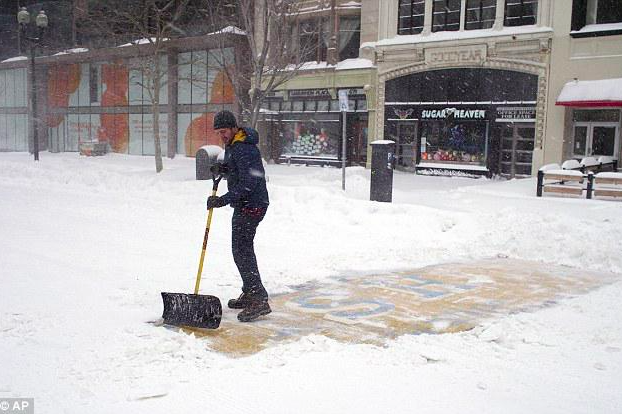 The man who shoveled snow off the Boston Marathon finish line has been identified as Christopher Laudani.

While Philadelphia may not have seen much snow earlier this week, Boston was buried in more than 2 feet of it. That didn't stop one local bartender from braving the blizzard to clear off a city landmark.

@BostonDotCom The marathon finish line shovler was Christopher Laudani! He borrowed our shovel to do it!

Social media users in Boston and beyond shared photos of the (at one point) mystery man whose simple gesture quickly went viral with the hashtag #WhoShoveledTheFinishLine.

Even the Boston Police Department joined the search:

We saw profound acts of courage and kindness following the bombings which occurred in the City of Boston in April 2013 near the Boston Marathon finish line. Since that time, we have continually witnessed an outpouring of support for this great event and the City, demonstrating just how unique and special this race really is and all for which it stands.

For someone to brave the winter blizzard to clear our finish line for us is yet another statement as to what our event means not only to runners but also to Americans. We, at the Boston Athletic Association (B.A.A.), are the organizers and are responsible for the management of the Boston Marathon, but an act like we see depicted here proves that – in Boston – everyone owns the Marathon.