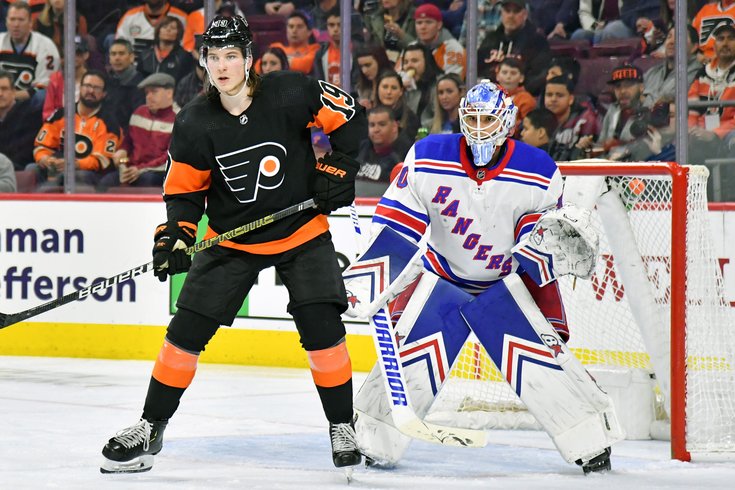 Flyers center Nolan Patrick has been sidelined this NHL season with a so-called 'migraine disorder.' Managing migraines requires a 'delicate balancing act,' according to Dr. Stephanie Nahas, a neurologist at Thomas Jefferson University.

Bodily injuries are an ever-present workplace hazard for professional athletes, a fact Philadelphia sports fans have been reminded of this week.

Like Carson Wentz's concussion that ended the Eagles' playoff run and Sixers center Joel Embiid's grusomely dislocated ring finger, athletes' injuries can be unfortunate and untimely, but except in rare instances players know there is a timetable for their return to action. There's a light at the end of the tunnel.

The Flyers' Nolan Patrick doesn't see that light, yet.

Patrick, a highly-touted center taken with the second overall pick in the 2017 NHL Entry Draft, has yet to play hockey this season due to a so-called "migraine disorder." It's a term that one local medical expert said fails to reflect the severity of his condition, which has left Patrick's promising young career in limbo.

“The terminology we favor is disease, because it’s something the person lives with all the time,” said Dr. Stephanie J. Nahas, a neurologist at the Thomas Jefferson University Headache Center. “Just like someone with asthma always has it, there may be some days they’re breathing fine, others where they have great difficulty because they’re having an attack.

“Migraine is the same. Some days you may look, sound and feel fine. Other days you can’t function.”

Nahas is not involved in Patrick's treatment. But she said the Headache Center treats various athletes ranging from recreational athletes to professionals. And there are plenty of people who suffer from the chronic condition.

Migraines affect about 12% of the overall population, with women three times more likely to be afflicted than men. That accounts for about 1 billion people throughout the world. Migraines typically peak between ages 20 to 40.

Unlike regular headaches, migraine attacks are more intense, may occur with greater frequency and can last for hours, even days. They also may have other associated symptoms. And yes, concussions — an ongoing issue among athletes — can bring them on.

The brains of people battling migraines tend to shift into an "alternative state," Nahas said. Their head typically hurts more on one side. A pounding sensation is common and can be made worse by exertion or moving the head. People with migraines also can suffer from nausea and sensitivity to lights, noises and odors.

“It limits your function to perform certain activities, even routine activities,” Nahas said.

Last month, Patrick said he was making gradual progress in part due to some lifestyle changes he made. But the rigorous physical activity and grinding NHL schedule are factors that most other migraine sufferers do not encounter.

“We encourage exercise and physical activity,” Nahas said. “Where it becomes difficult is that sometimes very vigorous activity can be a trigger for an attack. Triggers aren’t causes. They’re things that can flip the switch. The brain shifts from non-migraine state to migraine."

Various factors can affect that switch, including the time of day, diet and stress, Nahas said. So can the individual's biological makeup.

Yet, Nahas said athletes like Patrick, in some ways, may be bettered equipped to handle migraines.

“One might postulate that an elite athlete who’s gone through life being exposed to vigorous exercise and being dehydrated and under lots of stress and perhaps accumulating some head injuries, wouldn’t get as far as he has if he had some sort of biologic predisposition for migraines,” she said.

“That’s not a rule, of course. There are plenty of elite athletes who deal with migraines that are pretty substantial, but luckily are able to manage it. Others whose careers have been completely derailed by migraine, whether they had a head injury or not.”

Management options ranges from medications – taken either daily or on a periodic basis – to various FDA-approved devices designed to alleviate the symptoms.

“It’s sort of the offense and the defense of medicines,” Nahas said. Acute medicines serve as the offense, treating migraine attacks and shortening their duration. Preventative, or daily medicines, act as the defense.

It can be a "very delicate balancing act," Nahas said. Learning how to manage migraines can take a lenghty period of time.

"That’s one of the frustrating aspects," she said. "We don’t really have good ways to predict what type of approach would be best for a particular person. We make an educated guess based on what they’re telling us about their symptoms and lifestyle and we take into consideration other medical factors.  That’s how we craft our treatment plan. There’s a lot of guesswork and every case is different.”

So what’s that all mean for Patrick? Will he ever see the ice? If he does, can he expect a career in which this doesn’t become a constant worry?

With no clear answers, that’s one headache he can only hope will be resolved through patience and time.