Connecting Manayunk with Lower Merion, it is the city's first pedestrian/bicycle-only span across the Schuylkill River 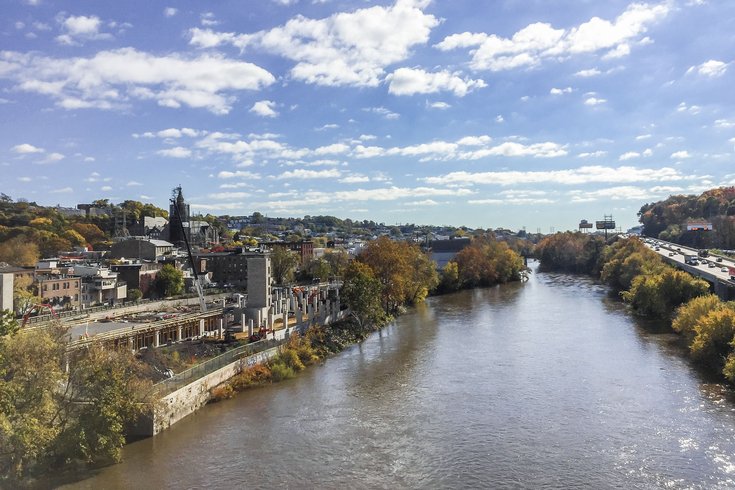 On Friday, it became a lot easier to get from Manayunk to Lower Merion Township.

At a wind-swept ribbon-cutting ceremony on a span crossing the Schuylkill River, I-76, Main Street and more, Mayor Michael Nutter, Lower Merion Board of Commissioners President Elizabeth Rogan and other officials formally opened the Manayunk Bridge Trail with an oversized set of gold-handled scissors.

The 0.6-mile span represents the city’s first pedestrian and bicyclist-only bridge over the Schuylkill River and “restores a vital link” between the municipalities that has been closed for three decades. (Oh yeah, the views are awesome, too.)

“I couldn’t be more thrilled. This is a hallmark, a day for everyone who wants to reconnect communities and make The Circuit [multi-use trail network] a reality,” said Sarah Clarke Stuart of the Bicycle Coalition of Greater Philadelphia.

“One day, it’s going to be part of a lovely loop including Manayunk, Lower Merion, Bala [Cynwyd] and King of Prussia,” she continued, noting that it wasn’t possible to make the same trip in a convenient sense since 1986. “There are so many transportation and recreation possibilities for people on either side of the Schuylkill River.”

“There is no better example of regional cooperation than, quite literally, this bridge that breaks down artificial barriers and literally brings people together.”– Josh Shapiro, chairman, Montgomery County Board of Commissioners

Almost a year to the day after the project's groundbreaking ceremony, well over 100 people ventured out onto the span – near the delineated Philadelphia/Lower Merion Township line – to celebrate its completion.

Others waited patiently at the Manayunk entrance (near High and Dupont streets) with their bikes for the path to clear.

The bridge – which Rogan referred to as the 'High Line of the Main Line' – is seen as a "hallmark segment" of the Circuit Trails which encompass some 300 miles of pathways throughout Pennsylvania and South Jersey. The ultimate goal is a 750-mile trail network throughout the nine-county region.

Manayunk Bridge Trail Opening today! Tons of people made it out. Awesome for @PhiladelphiaGov and @MontcoPA pic.twitter.com/tokxZ70Wg5

Nutter said the $5.76 million project “revitalized an almost-forgotten bridge and transformed it into a functioning public space that expands and encourages recreational use” for runners and cyclists to safely use while boosting property values of nearby neighbors.

He also said the culmination was emblematic of the good things that can come by officials from different areas working together.

Admitting that “Philadelphia politics is a full-contact sport,” the mayor said he heard some initial hesitance to the partnership from the other side of the span in Lower Merion Township, but that was proven misguided.

“There was never a moment of disagreement and never a moment of politics between and among the Lower Merion Township commissioners, whatever their party might have been, and their engagement with the city of Philadelphia,” said Nutter. “That’s why we’ve been able to get so many of these projects done.

“If we let a little bit of that spread to the state and to the federal government, think of all the great things that we could get done.” 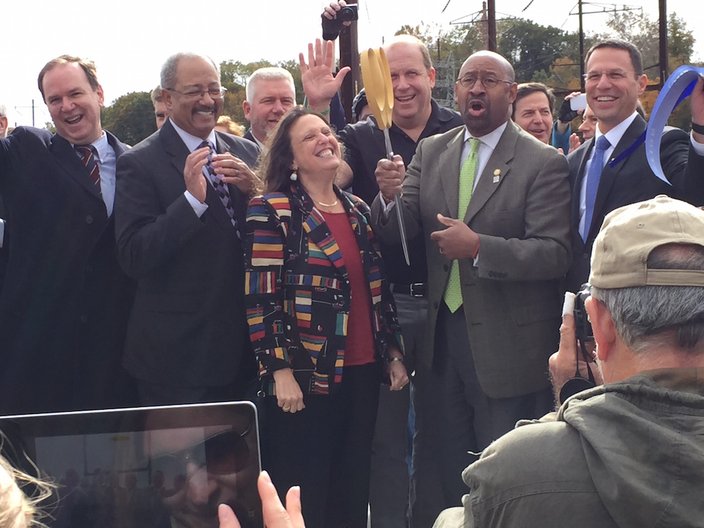 Josh Shapiro, chairman of the Montgomery County Board of Commissioners, concurred.

“We talk in government a lot about three concepts: quality of life, adaptive reuse and regionalism,” he said. “I think we’ve shown in Montgomery County, Philadelphia, Lower Merion, Manayunk that these aren’t things we talk about, that these are things we do. We act upon them, and this bridge is proof of that.

“There is no better example of regional cooperation than, quite literally, this bridge that breaks down artificial barriers and literally brings people together.”

SEPTA suspended rail service over the bridge in 1986.