March Streaming Madness: And the winner of our best TV show bracket is...

For the last couple of weeks, we've been asking you to vote on our bracket to determine the best show to stream while in quarantine. And after receiving tens of thousands of votes, we finally have a winner.

And, boy, did you guys get it wrong.

Our final pitted The Office, the winner of the Netflix Region, against Game of Thrones, the winner of the HBO Region, after the duo knocked off It's Always Sunny in Philadelphia (Hulu) and Friday Night Lights (Amazon Prime), respectively. After all the votes have been tallied, the title for the best streaming show according to PhillyVoice readers belongs to... The Office.

Here's a look at the final results:

As you can see, it wasn't particularly close. And that's a travesty.

If you've been following our bracket over the past few weeks, you know that I've voted against The Office every round since the Sweet 16, when it was matched up against Parks and Rec. It won, of course, and I then picked against it again when it faced off against Breaking Bad* in the Elite 8. Somehow, someway, The Office knocked off what is widely considered one of the best television shows ever made — across all genres — when it upset Walter White and Jesse Pinkman before heading to a Final Four matchup against Always Sunny, the somewhat surprising winner of the Hulu Region. After it taking care of the gang, it then headed up against another monster in Game of Thrones, which knocked off Girls, Succession, Sopranos and The Wire* on its way to the Final Four.

*Either of these shows would've been a more worthy winner.

As you can see, I didn't think The Office belonged anywhere near the Final Four of this bracket, let alone winning it all. But here we are, and in a way the results make total sense. The Office has been off the air for a couple years and is an easy watch (at least for the most part) to pass the time while you're stuck inside your home. Game of Thrones, on the other hand, is a much more difficult show to watch, one that you not only have to pay attention to in order to follow but also is full of hard-to-watch scenes involving rape, incest, child murder and just general violence at levels never before seen on television. On top of that, it's just a year removed from a widely disappointing final season that caused many to turn on the show entirely.

The Office is a fine show. Let's start there. Game of Thrones, on the other hand, was a cultural phenomenon that ultimately hurt itself with a final season that was plagued by plotting and production issues. But for the majority of the first seven seasons, it was unlike anything that had ever been seen before and it would've been interesting to see how this vote played out if the lasting image burned in so many GOT fans' heads wasn't one of the most beloved characters on the show making an abrupt heel turn in the penultimate episode and then being murdered by another fan favorite.

But we can't judge the show based on that season alone. And when we look at it in its entirety, it's hard to see how the Office wins.

Perhaps the only thing it may have over an epic production like Game of Thrones is that it's funnier — and as a comedy, it would be bad if it didn't have the edge here.

I almost forgot. There is one other thing The Office has over Game of Thrones: the worst TV character of all time. Worse than Cersei Lannister, worse than Joffrey Baratheon, worse than even Ramsey Bolton. No, I'm not talking about the guy who falsely promised to pay for underprivileged kids' college educations. I am, of course, talking about Pam Beasley, the most infuriating character in television show history.

In her defense, she is one of the few characters that actually shows some development, except it's in the total wrong direction.

Pam starts off as an innocent secretary. Then cheats on her fiancée with a co-worker, cancels her wedding, gets back with her fiancee, breaks up with him again after he gets fired, strings Jim along the entire time and ultimately ruins his relationship with Karen, leaves her company to go work with her misogynistic boss, steals her former co-workers' clients, refuses to give them back and demands a promotion, marries Jim, traps him, tells him it's OK to chase his dream job in Philadelphia but constantly guilts him for trying to make a better life for their family, then refuses to let him travel the country for three months after he put up with her going to (and failing out of) art school in New York for three months, and, finally, puts their house (the house he grew up in) on the market without even telling him.

Not enough? What about the time she told Jim the sex of their baby even though he didn't want to know until it was born? Or the time she insisted she get a new chair at the expense of a new printer that would've benefitted the entire office? Or what about the time Jim had to hire her replacement and Pam insists that he's attracted to her and refuses to take no for an answer, even though he continues to prove his loyalty at every turn?

And that's just what I remember after not having watched the show in years. Most of the above moments ended with some curse words being hurled at the screen, but I can't tell you how many other times my wife and I audibly groaned at something Pam did while watching this show. She's just the worst, and there are plenty of articles out there that offer several additional examples to confirm this universal truth.

OK, so Pam's arc may not be as bad as some (read: many) of the characters on Game of Thrones, but Pam played the game better than all of them. And now, while the rest of them lie dead, she and her Office colleagues sit atop or Iron Streaming Throne.

To be honest, this is a way worse ending than King Bran. 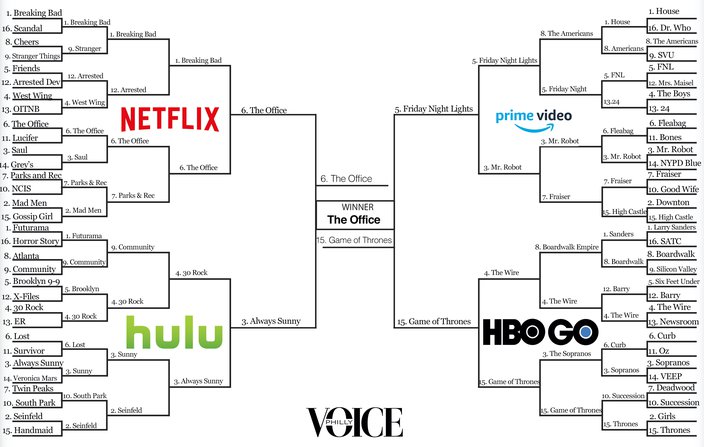