Is the 'Marcus Mariota to the Eagles' dream dead? 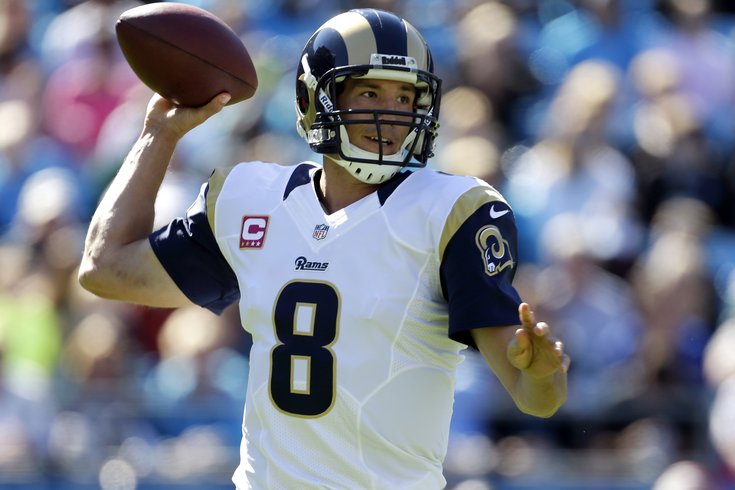 The Nick Foles for Sam Bradford deal doesn't make much sense, unless ...

The Eagles made an absolutely baffling trade shortly after the 2015 free agency period officially kicked off. In case you missed it, they traded Nick Foles, a 4th-round pick in 2015, and a 2nd-round pick in 2016 to the Rams for Sam Bradford and a 5th-round pick. In chart form:

Sam Bradford is a former #1 overall pick, and from a prospect standpoint, he was probably the most "sure thing" QB coming out of college in the last five drafts aside from Andrew Luck. Bradford's career has not gone as planned. He tore his left ACL Week 7 of the 2013 season, and then he tore it again in August of 2014. When he's been healthy, he's been ... OK, I guess. His best season was the one that was cut short in 2013, when he threw for 14 touchdowns and 4 interceptions in 7 games. Then again, among all active quarterbacks, Bradford has the lowest career yards per attempt in the NFL.

Bradford was also the last of the quarterbacks to receive a humongous contract as the #1 overall pick before the league and the players hammered out a new collective bargaining agreement that put a cap on rookie contracts. And so, in this, his final year of his rookie contract, Bradford is going to count for just shy of $13 million against the cap.

The deal that the Eagles made for Bradford has been unanimously destroyed by both the media and the fanbase, and many people are looking for answers. BleedingGreenNation.com, for example, took an approval poll for the trade:

I'm with you. The Eagles' Dave Spadaro tweeted that Bradford is indeed going to be the Eagles' quarterback, which is almost comical that he would even have to answer that question.

No. Bradford is the QB. RT @MirnesFA5: @DjNickTalarico @DaveCPhilly I still think we get Mariota , Bradford and picks to move up.

No RT @_DanD_: Is there any chance we give the Titans Bradford and some picks in exchange for a certain lofty pick

I mean... How often does a team make a trade in any sport, and the fan base comes together as one to not just disagree with the trade, but ask if it's actually real? And a spokesperson of sorts for the team actually takes the questions seriously and answers them? (No offense to Dave, of course -- it's the situation that's amusing).

If you're not a Bradford fan and you're looking for some pure, good old fashioned speculation and/or hope, I'll do my best to present a scenario in which the Eagles could still be looking to move up to get Marcus Mariota.

A month ago, a report by Jason Cole of Bleacher Report surfaced that teams at the top of the draft favored Bradford to Winston or Mariota, with the following explanation, transcribed by BGN:

"This is really fascinating because there are teams that are sitting at the top of the draft, according to executives that I’ve talked to, who would believe that they would prefer to have Sam Bradford, who’s 27 and coming off basically missing the last year and a half of his career — that they would rather have then take a chance on, say, somebody like Marcus Mariota or Jameis Winston because they have seen what Bradford can do. One caveat to this is: is Bradford healthy or not coming off of two ACL surgeries? But the belief is: take a shot with Bradford and save your first-round draft pick and take somebody else."

If the Buccaneers and/or Titans don't feel that Mariota or Winston are great fits for their team or simply worthy of the #1 or #2 overall pick, couldn't they just trade for Bradford or their own? Yes, however, they could sort of "have their cake and eat it too." By that I mean, they could land a QB they prefer anyway in Bradford while trading their valuable 1st/2nd overall pick to a team that does value a QB in this draft for a king's ransom.

Here's how that scenario works:

• Why it makes sense for the Rams: The Rams, knowing the Eagles have to land Bradford in order to facilitate a trade up to #1 or #2, get an outstanding return from the Eagles. They get a QB with a great season under his belt in Nick Foles along with 2nd and 4th round picks. Foles is better than any QB the Buccaneers or Titans would have to offer in a trade, thus necessitating the inclusion of the Eagles, as opposed to the Rams just dealing directly with the Bucs or Titans.

• Why it makes sense for the Bucs or Titans: With Bradford in hand, the Eagles then deal him to the Bucs/Titans along with a a strong package of draft picks and/or players. The Bucs/Titans get a QB they're happy with, and a bunch of picks to build around him.

• Why it makes sense for the Eagles: Chip Kelly gets "his guy."

So there you have it... Everybody wins!

...or you should just learn to love Sam Bradford.