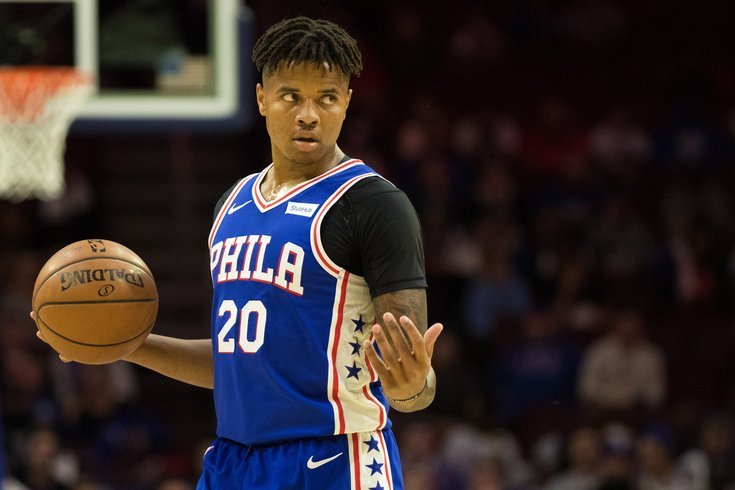 Markelle Fultz played in just 33 games over two seasons for the Philadelphia 76ers. Now with the Orlando Magic, teammate Aaron Gordon believes Fultz could be a sleeper star.

Philadelphia 76ers fans have largely grit their teeth and accepted the incredible sunk cost of the first overall draft pick spent on Markelle Fultz in 2017.

The saga does not really need much repeating, but Fultz never delivered in Philadelphia. He barely got on the floor — and when he did, there's evidence his entire presence here was perhaps a glitch in the Matrix.

been watching this fultz video for hours and still can’t explain it pic.twitter.com/oPNhy2oR2r

The highlight of Fultz's Philly career, before his diagnosis with thoracic outlet syndrome took him off the floor, was a triple-double in a meaningless game.

The Sixers traded Fultz to the Orlando Magic for Jonathan Simmons, who's no longer on the roster; a 2020 first-round pick from the Oklahoma City Thunder (it's top-20 protected, so it's still not much to celebrate despite the George-Westbrook firesale out West); and a second-rounder.

Down in Orlando, you almost have to feel for the fans who are now on the incline of what could be another Fultz roller coaster. While his new teammates immediately embraced him after the trade, the rhetoric on Fultz is getting a little ridiculous again.

Teammate Aaron Gordon recently appeared on SiriusXM NBA Radio to discuss the Magic's offseason, including the status of Markelle Fultz for next season. Gordon was effusive in his assessment of Fultz's unrealized potential.

🔊 "[Markelle Fultz] is a monster." - Aaron Gordon@EvCoRadio caught up with @OrlandoMagic PF @Double0AG at @TheNBPA Camp in NYC.

He may well be a monster, just not the kind Gordon is thinking.

Magic coach Steve Clifford said in July that there's still no timetable for Fultz's return to the court. Fultz told The Athletic he's being given all the time he needs to get himself right.

"Nobody here is rushing me," Fultz said. "Everybody here is just open to me getting right and healthy first."

Whenever he does return, Fultz will join another former Sixer, Michael Carter-Williams, as a point guard on a roster that's improving after a playoff campaign. Gordon and teammates Nikola Vucevic and Terrance Ross all re-signed in Orlando. The Magic added Al-Farouq Aminu in free agency. They drafted Auburn forward Chuma Okeke, spending the 16th pick on him despite a brutal injury many thought would push him out of the first round.

It's probably safe to take a long nap on Markelle Fultz, but maybe it really is too soon to sleep on him. By now, Sixers fans would probably prefer to see him thrive in Orlando simply to feel justified in the team's initial evaluation of him.