Fret not, it's only temporary 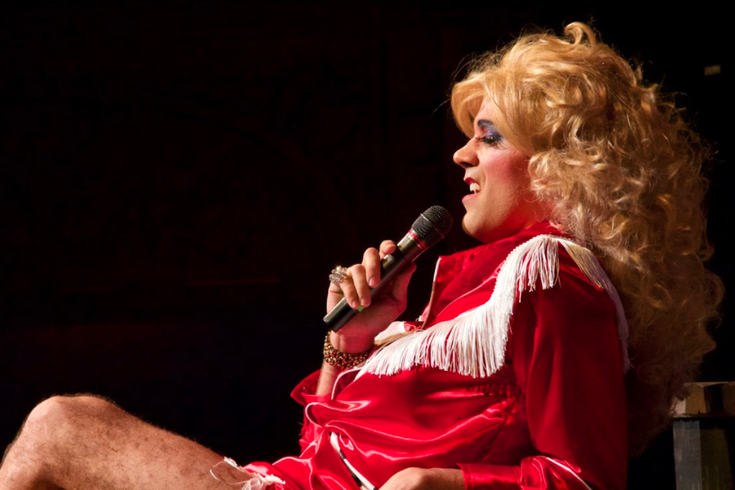 "Puns are the highest form of comedy – or the lowest – so we sit around every year and try to find an evocative Pig pun, and this time 'Let's Make a Squeal!' brought to mind 70's nostalgia," said van Reigersberg.

Many local theater companies traffic in absurdity, yet few make incongruity their calling card. Pig Iron Theatre Company is at the top of this list with its flow of experimental plays, performance art frippery and avant-garde clowning. Founded in 1995 as an interdisciplinary ensemble by a trio of friends – Quinn Bauriedel, Dan Rothenberg and Dito van Reigersberg – Pig Iron is aware what they do defies categorization.

They also get that it takes cold, hard cash to maintain a company studio-office space and a school whose studies focus on physical theatre and Lecoq clown pedagogy. So, on a yearly basis, they hold a fundraiser at The Trocadero with performer friends helping out. For its iteration this evening, the company turns to a game show theme: "For the Love of Pig Iron 2018: Let's Make a Squeal!"

"The annual fundraiser is one of my favorite nights of the year," said David Sweeny, the man behind Philly's "Johnny Showcase" character.

"Pig Iron is always pushing forward into new territory, and it's so exciting to see the new generations of creators coming up through their school."

There is an additional incentive for audiences to flock to the Troc as it is one of the last appearances that van Reigersberg's famed "Martha Graham Cracker" drag character will hold in Philadelphia for some time. That's good news: For the next six months, he will be working in Vegas.

"I believe I will be a hairy, singing lady in the Vegas show, 'Opium,' at the Cosmopolitan Hotel, but I won't be Martha," said van Reigersberg.

Currently on the prowl for a moniker for his Vegas stint ("I'll let you know when I re-baptize myself for my western desert lady self"), Martha Graham Cracker's last shows in Philly, for now, are on Feb. 8 at L'Etage (624 S. 6th Street).

"I will be in Vegas 'til August and will get back into my Martha boots and ride again. The Pig Iron folk won't even have time to miss me."

That's because Pig Iron is already in the middle of preparing some of its most daring, large-scale productions on its own, with graduates of its school or with other members of the Philadelphia performance community.

"We're working on a piece with a trio of incredible ladies and grads of our school – Jenn Kidwell, Mel Krodmann, Jess Conda – 'Those with Two Clocks,' in which they forge a world that blends the lonely world of Beckett, the strange magic of cross-dressing as men, and the weird rules of masculine stoicism and suffering," said van Reigersberg. 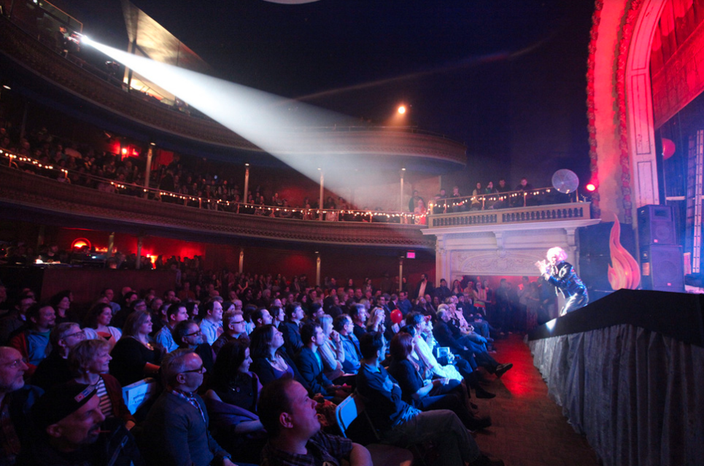 Martha Graham Cracker performs one of her many shows at The Trocadero.

That's why they're having "For the Love of Pig Iron 2018: Let's Make a Squeal!" – to pay for the new shows and raise funds so that they can grow its educational program and support students who need financial aid for the school.


For the benefit and the auction, Pig Iron's Quinn Bauriedel will host, toy with, and taunt the audience in thematically relevant ways by quizzing them throughout the night and giving away bizarre and terrific prizes. Along with performances from Showcase, TJ Kong, Grace McLean and Ballet X dancers, Graham Cracker will sing what he called "game and chance-related songs, and some insane mash-ups."

As for using a retro game show theme for the charitable proceedings – think "Wheel of Fortune" meets "Let's Make a Deal." Van Reigersberg said those particular game shows tug on his nostalgia heartstrings.

"They were fun and kind of innocent," he said.

"They implicated the audience as participants and had a bold, kind of stylish, almost garish decor, which we are using to sass up the interior of the Troc. Plus, I am guilty of loving puns. Puns are the highest form of comedy – or the lowest – so we sit around every year and try to find an evocative Pig pun, and this time 'Let's Make a Squeal!' brought to mind 70's nostalgia. It only narrowly beat out 'Squeal of Fortune."