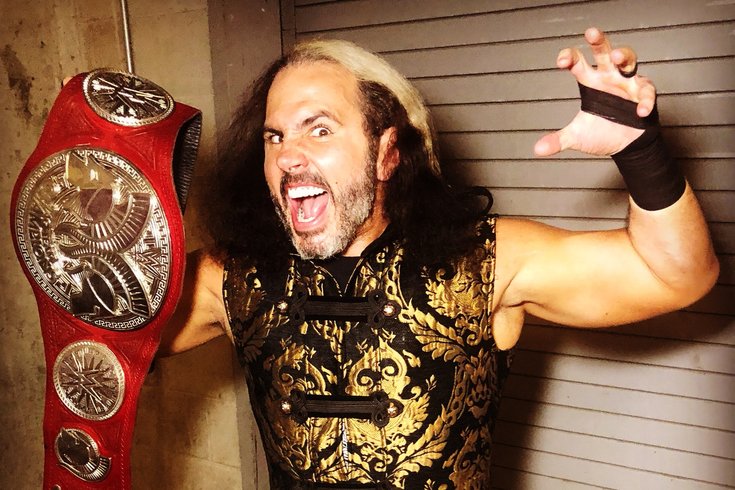 WWE is coming back to the City of Brotherly Love with a live event from the Wells Fargo Center this Friday night, and all of Monday Night RAW’s top stars are slated to be there [with a glaring omission being the brand’s Universal Champion, Brock Lesnar].

What’s being billed as the SummerSlam Heatwave Tour, WWE’s best of their red brand will be live and in person for an untelevised live event. And just because it’s untelevised doesn’t mean it’s not important – some of the best moments are caught at these untelevised live events, and that’s what to expect from these RAW superstars on Friday night.

The last time WWE visited Philly was in the record-setting cold of January for the company’s annual Royal Rumble pay-per-view. It was one of the best shows of the year to this day. Now, we’re in the middle of a scorching heat wave that sees no signs of dying down, so naturally, WWE returns to the same arena they sold out in January.

PhillyVoice: You’re now RAW Tag Team Champions with Bray Wyatt, a guy who you sort of had a social media feud with years ago before returning to WWE. When you came back to WWE, did that just completely go away or was it blown out of proportion?

Matt Hardy: “Long-term booking, my friend. I think Bray is an extremely talented competitor and performer. I’m a big fan of his work. I’m glad I was able to cure him of Sister Abigail and now we’re teaming up. I think there’s still a much bigger potential with the two of us if we get the opportunity to explore that role, which is something we’re working on right now and it’ll happen eventually.”

You and Bray really came into a team together after Jeff Hardy’s shoulder injury when he needed surgery. When Jeff came back, did you think he’d be back paired with you doing stuff, or did you know he would eventually get sent to SmackDown Live?

“I didn’t know. Those types of things are obviously over my head. I would love to have Jeff involved. Jeff is totally fine being on his own as the ‘Charismatic Enigma’ Jeff Hardy. He’s totally fine being Brother Nero. I think Brother Nero would be good for him for career longevity, but I think Jeff can go to SmackDown and be amazing and be the “Charismatic Enigma” and he can do everything he can do in that persona, and if we need to utilize him as Brother Nero, we can do that whenever.”

The latest WWE 24 which highlights you and Jeff really opened people’s eyes. I’m not sure many were expecting it to be as open and honest as it was. Did you see the finished product beforehand and have any say in what was in and what was out?

“I did see it before, and I was very hands-on working with the WWE Network people. I think they did an amazing job. There was actually talk of making it 90 minutes because you were telling two stories as opposed to just one with both myself and Jeff. The decision was made to keep it in the same format of around an hour time, so they really packed a lot through that hour. I made this pact with my brother back in 2013, I said if we’re going to tell this story, we need to wait for the WWE platform. Fortunately, things worked out. I wanted it to be raw, I wanted it to be real, I wanted it to be a little dark, because there were times that were dark. I think it was a good story to show people that even if you do end up at a bad place in your life at some point, it’s never too late to change. It’s never too late to come back. You just have to put your mind to it and be disciplined.

“I just spoke to the people at the Network today, and of all the superstar 24’s they’ve had, ours was the most-watched within 10 days. I appreciate all of the fans who are taking the time out to spend an hour and are see our story and watch our journey.

“I’m very proud of what they did. The Network was very proud of myself and Jeff for partaking in it and displaying such honesty. I’m really proud of the project.”

How different is coming to a city like Philadelphia for a live event as opposed to a television taping or pay-per-view?

“There is a little bit of a difference, I’d say. A lot of it is much more intimate. The wrestlers are able to interact much more with the fans, which is enjoyable. And this is going to be a stacked lineup. We’re going to Philly and then MSG [Madison Square Garden] the next night. We have everyone on the RAW roster there. It is totally packed with every RAW superstar, so it’s going to be a supercharged card.”

What do you look forward to the most when visiting Philly?

Has the audience in cities like Philly changed much between now and the Attitude Era [late 90s-mid 00s]?

“It hasn’t changed a lot because Philly really was ahead of the curve. It was ahead of all of the other cities as far as being ‘smart.’ Philly was always the town where a lot of wrestlers would go, ‘Oh, it’s the bad-guy-town, city. They always like the heels.’ But that’s just because they were smarter fans and they were more in on what was going on. And now just because we’re in the age of information and so much more information is available to everyone so quickly, they’re still ahead of the curve.

“Still, they’ve always been a very passionate audience. I remember hearing years back when the Dynamic Dudes came in and they got booed out of the building because people were just like, ‘OK, this is an act we don’t like, so we don’t want to support this right now.’ Sometimes, it probably becomes annoying to the promoters who are there, but for me, it’s very fun and I appreciate it.”

With your current “Broken” character being utilized, did you think when you re-signed WWE that this character would be used at all? Or would it just be “The Hardys” with your brother?

“I one hundred percent expected to get back to being “Broken/Woken.” A whole lot of things were going on with Impact. The situation was publicly known, so there were some issues going on there. I was confident and I know within my heart, it was all of my creation. Everything about it would point to me owning it in every capacity. I knew it would happen, it was just a matter of when.

“The essence never left me. When I came back and I was just “The Hardys” with my brother, there was always that essence within me, because that’s really part of me now. It was a question of “when” and not “if.”

Despite being a tag team champion, you’ve enjoyed much singles success in WWE and elsewhere. Do you have any World Title aspirations at this time?

“Right now, because I am half of the RAW Tag Team Champions with Bray, my initial goal for the immediate future is to make the tag team division as good as possible and have a good, entertaining title reign. I think I’m almost at the stage of my career where I’m more focused on wanting to do entertaining, great television programming as opposed to necessarily being a champion or winning titles.

“There are guys here that are so amazing. Seth Rollins is one guy that stands out. He is just an amazing performer. I love watching him, he’s truly poetry in motion. There are a lot of guys like that, and yes, I can’t lie, I would love to be able to work with those guys and have some great 20, 30-minute matches. And I think that’s something that will happen at some point in the future. As far as making it a goal to be the champion, I don’t know if that’s necessarily something that I’m focused on now. If a scenario like that came around, I think that’d be amazing. I’m trying to have fun and my goal is to be as entertaining to the audience as possible.”

Now that NXT routinely shapes characters and pushes them to the main roster, have you taken anyone under your wing or reached out to anyone to give them advice?

“I certainly try to. I feel like that’s almost part of my duty. The wrestling business and industry has given me so much, I feel like it’s my job to help out people if I can. The Revival is a tag team that really thrived down there, and you know, once you come up here to television, the formats change. The kind of common goal they’re looking to get out of performers on a television product changes from NXT. I’m very high on The Revival. I think those guys are extremely, extremely good. I would love to have a long program with myself and Bray facing them. There have definitely been times where I’ve reached out to them and gave them maybe a tip or two that would help them, and just tell them you’ll have to bide your time and wait it out here because you don’t get things immediately. But I am a fan of those guys.