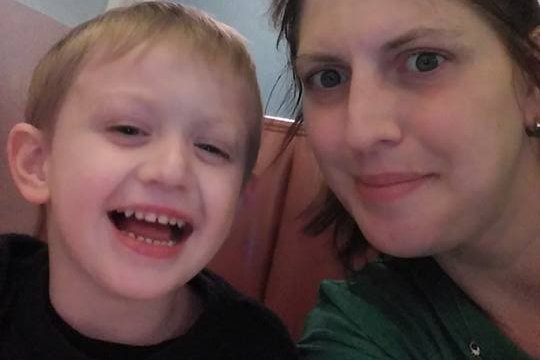 Bonnie Marie Lee-Moran, 32, of Mayfair, with her son Ryan. Ryan suffers from autism, and Bonnie Marie says an anonymous neighbor left a nasty letter in her door complaining about her son.

A Mayfair mother was shocked and saddened when she was given a scathing letter from a — shall we say, perturbed — neighbor concerning her 3-year-old son Ryan, who suffers from autism.

The story was first reported Tuesday in PhillyMag.com.. Bonnie Marie Lee-Moran posted the letter she found between her doors on Saturday in the Facebook group Mayfair UNCENSORED.

Sent from "one of your neighbors," it refers to Lee-Moran's son as a "screaming brat," complaining that the noise the child makes is ruining the nice weather, even using a derogatory term for people with mental disabilities. Here's an excerpt, unedited:

"No one wants to hear him acting like a wild animal it's utterly nerve wracking, not to mention it's scaring my normal children."

You can read the entire letter below: 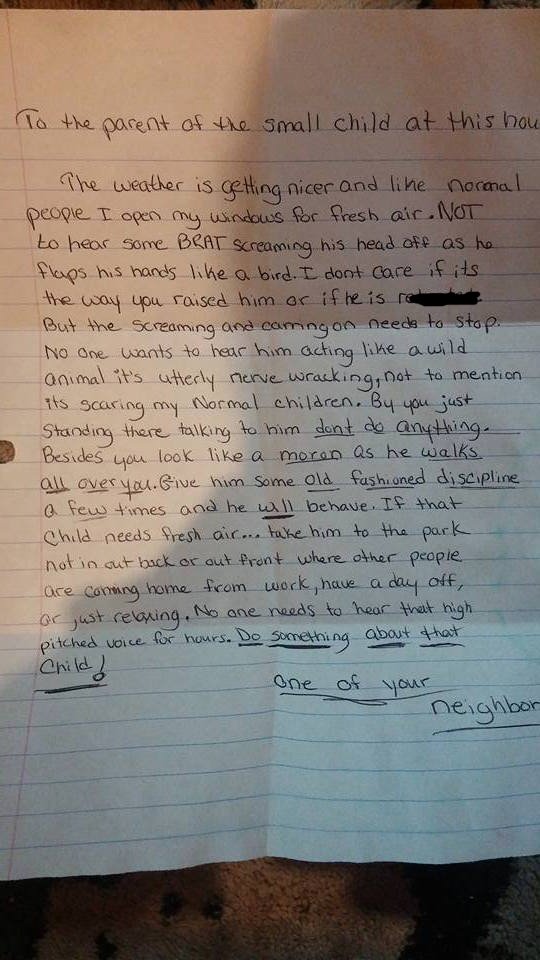 Bonnie Marie Lee-Moran, 32, of Mayfair, says an anonymous neighbor left this letter in her door complaining about her autistic son.

Lee-Moran, 32, told PhillyMag that Ryan has been diagnosed with pica and ADHD in addition to autism. She said her son's conditions make it difficult for him to express his needs and desires at times, and that he essentially didn't speak at all until he was 3.


She explained to PhillyMag.com that Ryan had been playing outside the day before the letter was left and began clapping his hands together and squealing, noting kids can be naturally loud sometimes. The letter brought her to tears, she said, and she was frustrated the anonymous neighbor didn't come to her directly.

“My family has been in this home since it was built in the ’30s,” Moran explains. “We were the first ones on the block. We know everybody. When there’s a problem, we go to each other and work it out. So this, I just don’t understand it.”

Luckily, a silver lining has emerged from the situation. Lee-Moran told the magazine other parents have asked to set up play dates since she posted the letter. Also, the comment section on the original post is full of supportive messages. Here's what commenter Sharon Hazel Connelly wrote (comment is transcribed unedited):

"Bonnie, hang in there, all you can do is do what your doing. Having a 50 year old brother with special needs and a nephew also, you will run into this ignorant behavior from time to time. Some people should try a little empathy and picture walking in someone else's shoes. Educate them, then move on. They aren't important enough to worry about."

Kelly Nydegger, an assistant director at The Center for Autism, told CBS3 this incident is an example of why Autism Awareness Month, which is April, is necessary.