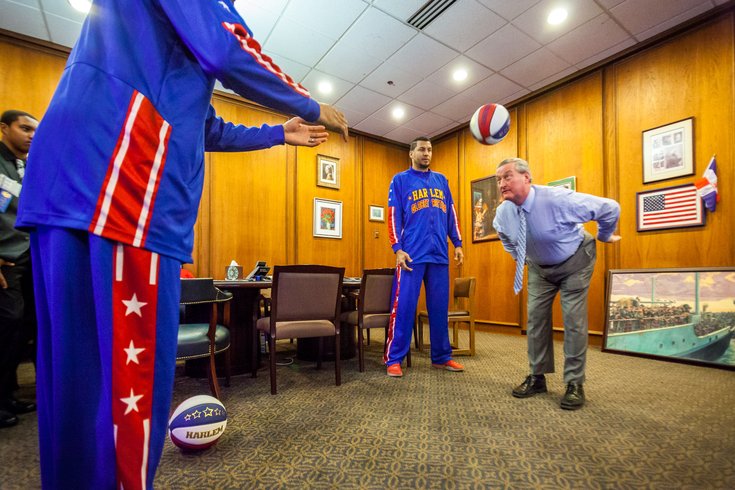 Mayor Jim Kenney had some all-star visitors on Monday – but, we aren't just talking about the Harlem Globetrotters.

The city's Police Athletic League participated in Lockheed Martin PAL Day at City Hall, where students involved in the program shadowed city officials for the day.

Ziara Singleton, 16, from the city's Logan neighborhood, was able to spend the day with Kenney, learning everything he did as the freshman mayor of Philadelphia.

Singleton said that she sat in on discussions of the city's possible tax on sugary drinks – which Kenney said he plans to introduce on Thursday – and she toured City Hall and learned about the building.

"I've been everywhere today," she said. "It's been so beautiful."

According to Kenney, she got to be in charge for the day.

But Singleton's day wasn't all budget meetings and history lessons. At about 2:30 p.m., two Harlem Globetrotters – Orlando "El Gato" Melendez and Jonathan "Hawk" Thomas – joined Kenney and Singleton in the Mayor's Office for some lessons in basketball handling and tricks.

They also all played a quick game of Nerf basketball. 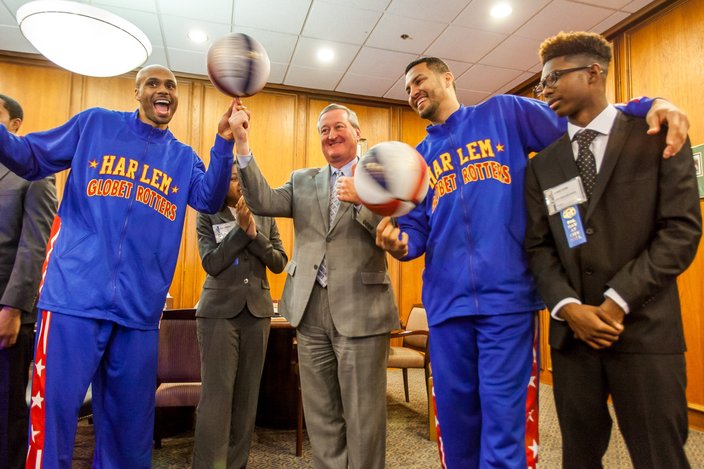 "I love what I do, playing for the Harlem Globetrotters," Thomas said. "For us, we love what we do."

The players got Kenney to carry a basketball around his body and pass it with a sharp hit from his elbow. They also showed him the Globetrotters' signature basketball-spinning-on-one-finger tricks.

But, perhaps the most laughs were heard when Kenney, a good-natured participant, bounced a basketball off of his butt in a pass to Melendez.

That time @PhillyMayor bounced a basketball off his butt. ("That time" was 5 min ago) pic.twitter.com/XB0C8PbDwM

Melendez, a native of Puerto Rico, talked about how growing up he walked two miles to a basketball court to play and would be followed from the basketball court by cats who wanted the ham sandwich lunch he often carried with him.

"That's how I got my nickname," Melendez said.

The player presented Kenney with his own Globetrotters jersey in celebration of the team's 90th anniversary.

After the meeting ended and Kenney had made sure to dunk a Nerf basketball, Singleton said she enjoyed her day in City Hall and hoped to use what she learned in her future career path. Singleton said she hopes to be a "federal agent or the president" after she graduates.

"I wanted to be here to learn what types of obstacles there are to get there," she said.

Asked how Kenney had treated her, as she walked in his shoes for the day, Singleton said Kenney had been acting as a father-figure.

"He's been really nice, really sweet. You can tell he's a father," she said.

The Harlem Globetrotters will be making several local appearances in March to celebrate the team's 90th Anniversary. For a full list of appearances and tickets, click here.