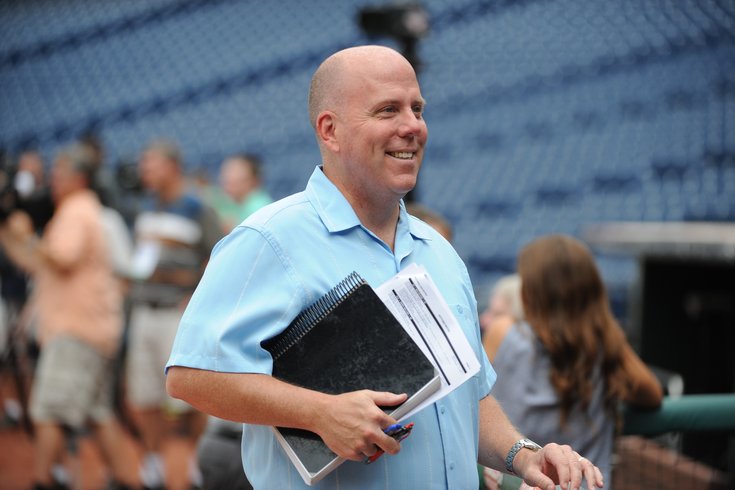 Tom MCCarthy has been the Phillies' play-by-play man since 2007.

ALLENTOWN, N.J. – Tom McCarthy didn’t know what he wanted to study in college, so he gave himself some options.

He applied to Trenton State College (now The College of New Jersey) to study Biology and become a doctor. He applied to Rutgers with the idea of majoring in Business. Then to North Carolina Wesleyan, where Hotel and Restaurant Management sounded interesting. And finally, Indiana University, which offered Journalism.

Becoming a Major League Baseball play-by-play television announcer wasn’t exactly on the list, but it was in the back of his mind now and then; way back when he was a kid growing up near the Jersey Shore.

“You never think you can be any of that stuff as a kid,’’ he said recently, relaxing in a lounger in a room off the family kitchen. “You can be what your parents or uncle was, a police officer, a fireman, a lawyer.’’

He chose Biology, then switched to Communications as an upperclassman. Eventually sports chose him. Especially baseball. Especially announcing. Ultimately, beginning in 2007, he became the Phillies’ TV play-by-play guy.

“The hardest thing I’ve ever done. We had been with [Kalas] when he had the heart attack upstairs, and when we found out he died we still had to follow through with the game. I tried to hold back and not cry on air.’’

McCarthy, who turns 47 next month, grew up in a baseball family. Born in Jersey City to parents who were huge Yankees fans, he would join his grandfather in rooting for the Mets. Pop Pop owned McCarthy’s Pharmacy, complete with soda fountain, until he died when little Tommy was four.

The family moved to Brick Township in Ocean County, N.J., where brothers Ray, Tom and Kevin would grow up loving baseball.

“Moving out of Jersey City and down by the water was the best,’’ the middle child said. Tom Sr., and Helene now live in Lakewood, just a few minutes from their son’s home, his wife and their four children.

McCarthy’s father not only watches Yankees and Phillies games, but at 78 he is still an usher at the Phillies’ Class A ball park; working Lakewood BlueClaws games behind home plate.

His grandson Patrick (6-foot-6) is a sophomore at The College of New Jersey, majoring in Communications. Pat’s brother Tom plans on attending St. Joseph’s University, where he will pitch for the Hawks' baseball team. The youngest of the family are girls; Maggie (15) and Kerri (12).

Now entering the family vocabulary are words like softball and field hockey.

A year after changing majors, McCarthy’s life changed even more when he started dating Trenton State classmate Meg Wargins. They married three years after college in 1993. She teaches Special Education, and is also the primary caretaker of a labradoodle (Ginger) and boxer (Penny).

The dogs love welcoming guests to their home, often verbally from a fenced-in backyard; not far from the glass backboard and hoop on the side of the driveway.

McCarthy joined the front office of the Trenton Thunder in 1994 and for six seasons would be the radio voice of the Double-A Eastern League’s team. The affiliate went from Detroit to Boston and for the past several years has been that of the Yankees.

In 2001, the Phillies brought him over as a radio play-by-play guy, along with being pre-game and post-game host. From there he took an announcing job with the Mets, but two years later the Phillies offered him the TV gig.

In 2009 he would replace the legendary Harry Kalas, who died of a heart attack in D.C., little more than an hour before the Nationals' home opener. McCarthy took over the mike, calling it, “The hardest thing I’ve ever done. We had been with him when he had the heart attack upstairs, and when we found out he died we still had to follow through with the game. I tried to hold back and not cry on air.’’

He first used his communications degree in landing a sportswriter’s position with a weekly newspaper group in Princeton. From there he took a job with the Times of Trenton, but it was the spoken word that would write his future.

“Doing TV, I still fight saying too much. In college basketball I feel you can talk more. The NFL, you need to let it breathe a little bit more. With baseball you absolutely have to let it breathe,’’ he said as the brown boxer leaned into the recliner and licked McCarthy’s right hand. “Harry had an unbelievable style. I grew up watching the Mets and Yankees and those guys would chat back and forth. For me, the hardest part was not being a radio broadcaster on TV. I fought that a couple of years. I’d go back and watch a tape and say, ‘Shut up! What am I doing?’

“Even now,’’ he added, “I’ll watch and say, ‘OK, you don’t have to talk enough there; you don’t have to talk enough here. On TV, it’s more about the analyst. Radio is more about the play-by-play guy. You do as much as you can with as little words as you can and then just get out of the way. But there’s always something to learn. There’s always more to know.’’

Sometimes there is even more to say, such as a football game that’s a blowout. That’s when it’s time to tell stories. Or a Phillies game, when they’re losing 12-0 after five innings.

“We have certain restraints, and we understand that,’’ he said about he and his booth buddies: Matt Stairs, Ben Davis and Mike Schmidt. “But we kind of tell it like it is. You’re going to sound like a homer from time to time, that’s just the way it is. I didn’t play the game at this level. They did. But you can’t sit there for three hours and be critical, critical, critical. You just can’t.

“Harry always told me to always be yourself. We’d always talk about it. Ernie Harwell said the same thing, so did Gary Cohen and Howie Rose. The key is to be yourself and be as good as you possibly can.’’

Right now, that does not apply to the Phillies, who have as much chance of getting to the playoffs as the Brooklyn Dodgers. So when will things turn around?

“I guess my heart tells me that it will be at some point next year,’’ he offered. “Will they contend? I don’t know, but I think they’ll start winning. My mind says it’s probably going to be closer to 2017. They need a big bat, a power bat, and they need a similar rotation to Halladay, Lee, Hamels and Oswalt. To me it comes down to pitching and fundamentals.’’

Making pitches, consistently doing the little things right, continuing to improve. Just like up in the booth.