And there are more than 270 in the Philadelphia area alone 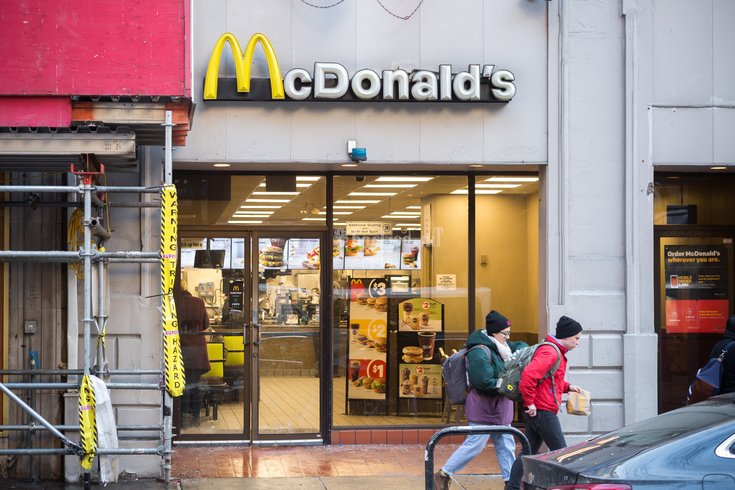 The McDonald's on Walnut Street in Center City.

McDonald's announced on Tuesday it will spend a couple hundred million dollars to renovate and modernize its Pennsylvania restaurants.

The renovations in 2018 and 2019 will update 360 restaurants in the state. There are more than 500 locations statewide, according to a press release from the company. In the Philadelphia region alone, there are more than 270 McDonald's outlets.

In total, $6 billion of renovations at stores across the United States are to be completed by 2020.

The new updates will include changes to the dining rooms, the addition of digital self-order kiosks, remodeled counters, digital menu boards, designated parking spaces for curbside pick-up through mobile order and pay, and larger coffee counters and display cases.

"McDonald's is an important local business and provider in the community," said Dan Delligatti, president of the Three Rivers McDonald's Owner/Operators Association in Pittsburgh. "McDonald's is helping create and sustain local jobs not only in the restaurant but also though its construction and modernization, and that helps support the local families they serve."

The new updates come as the company rings in the 50th anniversary of the Big Mac amid a fight to maintain its appeal to millennials.

In 2016 a McDonald's franchisee wrote in a memo that the Big Mac had "gotten less relevant."

The fast-food chain began attempts to stay fresh (pun intended) back in March when it announced that its Quarter Pounder hamburgers would be made with fresh beef, instead of frozen patties.

It also committed to using cage-free eggs by 2025 in the United States and serving chicken not treated with antibiotics "important to human medicine," according to a company announcement.