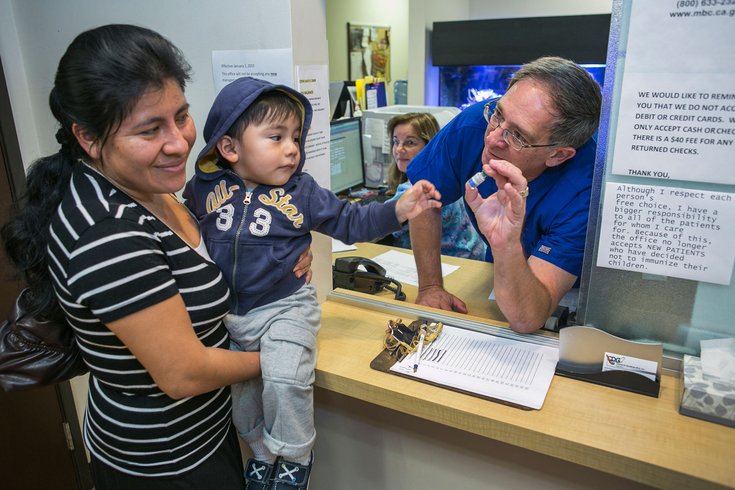 Pediatrician Charles Goodman, talks with patient Carmen Lopez, 37, holding her 18-month-old son, Daniel after being vaccinated with the measles-mumps-rubella vaccine, or MMR at his practice in Northridge, Calif., Thursday, Jan. 29, 2015.

A measles outbreak in the early 1990s left nine people dead, according to the Philadelphia Department of Public Health.

"Nothing educates as well as an outbreak," said Paul Offit, a doctor and professor of pediatrics in the Division of Infectious disease at the Children's Hospital of Philadelphia, who blamed the outbreak on a decision by two local churches to tell its members not to vaccinate.

Now, as a sliver of new parents say are linking the vaccine to autism - a contention that has been debunked by medical experts - a new set of cases has emerged across the country including one in Pennsylvania.

About 100 cases of measles have been confirmed by the Center for Disease Control since the new year. Most were in California and many were thought to be connected with an outbreak last year at Disneyland.

In Pennsylvania, 96 percent of the state's 155,000 seventh-graders were vaccinated for measles, according to state Department of Health data for the 2013-2014 school year. That leaves about 6,300 children who did not receive the vaccine. The rate of vaccination for about 150,000 kindergarteners, however, is 10 percentage points lower than the rate for seventh-graders.

Data from the New Jersey Department of Health indicate that 95 percent of the state's 535,000 school children received all of their vaccines, including the one for measles.

The conversation over vaccines has ensnarled New Jersey Gov. Chris Christie, who argued parents should have a choice over vaccinating their children, while President Obama has urged all parents to get the vaccine.

“Mary Pat and I have had our children vaccinated and we think that it’s an important part of being sure we protect their health and the public health,” Christie said Monday while on a trip in London, according to the Washington Post.“I also understand that parents need to have some measure of choice in things as well, so that’s the balance that the government has to decide.”

Offit compared getting vaccinated to New Jersey's law that mandates that some small children ride in a car seat.

"Why can’t parents make a choice there?" Offit said. "I don’t see any difference."

The science is clear: The earth is round, the sky is blue, and #vaccineswork. Let's protect all our kids. #GrandmothersKnowBest

President Barack Obama has urged parents to get their children vaccinated but believes there should not be a law requiring parents to do so, White House press secretary Josh Earnest said Tuesday.

Offit said the publicity around vaccines had been productive.

"What this debate is starting to gravitate to is whether this should be a choice," he said. "It is a long time in coming."