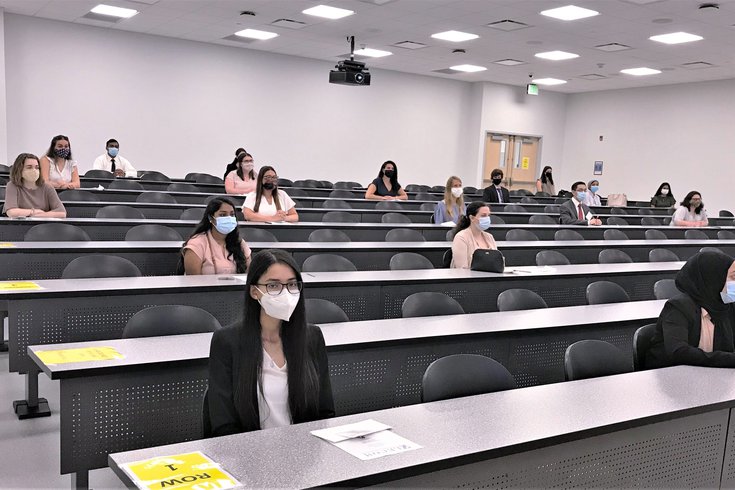 A survey of 33,000 college students found two-thirds were feeling lonely or isolated during the fall 2020 semester. Above, incoming students practice social distancing and other COVID-19 safety precautions last year at Lake Erie College of Osteopathic Medicine.

The mental health of the youngest American adults continues to be highly impacted by the COVID-19 pandemic.

Researchers from Boston University provided the latest glimpse at the issue through a nationwide survey of nearly 33,000 college students conducted during the fall semester. Half of them screened positive for anxiety or depressive disorders.

About 83% of students said their mental health was negatively impacting their academic performances. Another two-thirds said they were feeling lonely or isolated.

Sarah Ketchen Lipson, a mental health researcher at Boston University, noted that students are preparing to enter into a job market that the pandemic has made unpredictable. Plus, their educational experiences have been disrupted by the widespread switch to remote instruction.

"For the people between the ages of 21 and 25, this is a time of expansion in their life, with new connections and new things," Lipson told ABC News. "That is all being halted. I think this is a hard time for parts of life to stand still when there is normally just this fast-paced developmental time where so much is happening socially and professionally."

The survey's findings, released earlier this month, are consistent with mental health declines witnessed in adolescent and other young adults.

The mental health impact of the pandemic is much more pronounced among younger adults due to their stage of life, added Dr. Shekhar Saxena, a mental health professor at Harvard University. For many, their mental health issues will dissipate when the coronavirus crisis ends, but some will develop long-lasting effects.

"There is the uncertainty of where and what tomorrow will bring, which is faced much more by younger adults than by middle-aged or older adults, because this is the time for change in their lives," Saxena told ABC.

This impact is being felt among young people worldwide, according to the New York Times. Many feel they are paying the price of the measures taken against the pandemic. They have lost economic opportunities and have been unable to experience traditional milestones. They are among the last in line for vaccines.

In Italy, calls to the main suicide hotline doubled last year among young people, the newspaper reported. Hospitalizations caused by self-harm and attempted suicides have risen by 30% among young people since last fall at the Bambino Gesù Children's Hospital in Rome.

Mental health advocates have sounded the alarm about the pandemic's effect since the first lockdowns were instituted last spring.

The U.S. Centers for Disease Control conducted a series of panel surveys last June in response to widespread reports that anxiety and depression symptoms had increased considerably amid the stay-at-home orders and other pandemic restrictions.

The study found mental health issues were highest among the youngest adults.

Researchers found 75% of adults ages 18-24 reported at least one adverse mental or behavioral health condition and 63% experienced anxiety, depression or both. About 25% said they had considered suicide within the past 30 days.

Comparatively, 51% of adults ages 25-44 reported at least one adverse mental or behavioral health condition. Around 40% experienced anxiety, depression or both. About 16% said they had seriously considered suicide.