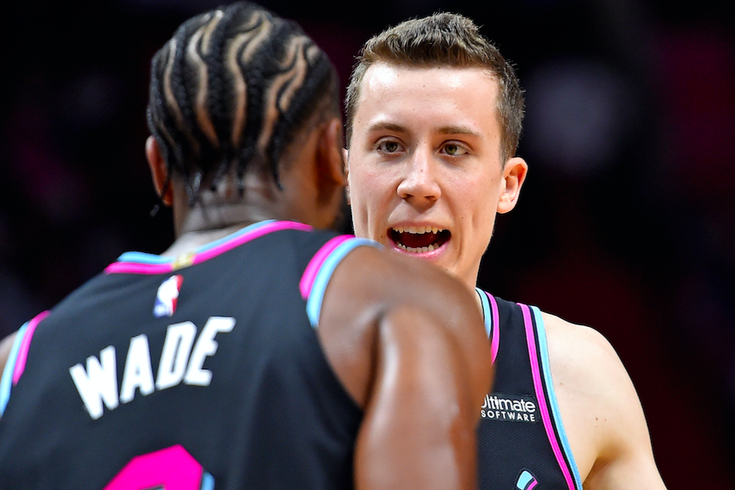 Miami Heat legend Dwyane Wade played what will likely be his final game in Philadelphia last week at the Wells Fargo Center.

After 16 seasons and three NBA titles, Wade is widely expected to call it a career at the end of the season, although who knows if he'll be tempted into a bench role for a contender next year.

RELATED: Sixers' Joel Embiid told to 'shut the f*** up' by Dennis Rodman

In his prime, Wade was unquestionably one of the NBA's great superstars, a clutch shooter with a ferocious drive and a team-first attitude. The Chicago native was largely celebrated for his ability on the basketball court and his philanthropic efforts off it, but he's also been recognized for his fashion sense over the years.

If you saw him at the NBA All-Star game, where he was an honorary selection this year, you might have noticed his hair was a bit longer than usual.

It turns out he had plans in the works for an experiment honoring one of his hoops heroes. For the first time in his career this week, Wade wore his hair in cornrows.

"I'm trying my inner Allen Iverson," Wade told the Florida Sun Sentinel on Tuesday. "I've gotten my hair braided like three times in practice, but I haven't worn it in a game. But I felt I was game ready, so 'For the Culture.'"

Wade took to Instagram to share Allen Iverson's reflections on his career last week, thanking the Sixers for putting together the video.

If you know me then you know how much this means to me. I remember being in my driveway trying to master A.I. Crossovers over and over until i got it right. After MJ @theofficialai3 is my favorite player. One of two reasons that i wear the number 3. I modeled my game after him and Mike. I can’t thank him or the philly organization enough for this. This means something to me. Thank you! #OneLastDance

Miami may have lost to Phoenix on Monday night, but it sure looks like the cornrows gave Wade a little vintage sizzle going to the rim.

Nah Dwyane Wade is still too much of a bucket to retire (via @nba) pic.twitter.com/i1rn96GuJa