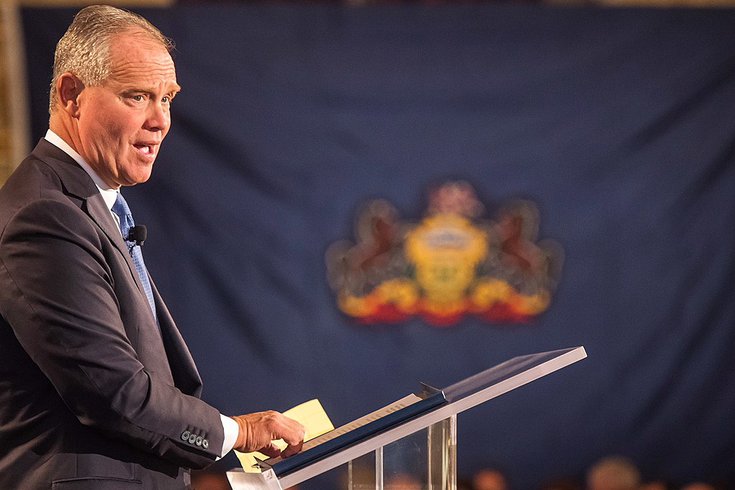 Mike Turzai, the ranking Republican in the Pennsylvania House of Representatives, will resign before the end of his term. Turzai, of Allegheny County, has served as House Speaker since 2015.

Republican Pennsylvania House Speaker Mike Turzai announced Wednesday he will resign several months before his term concludes. His final day in office will be Monday, he said during remarks at the Capitol.

Turzai, who represents parts of Allegheny County, was first elected in 2001 and rose to Majority Leader in 2010. He has served as House Speaker since 2015, advocating for limited government, privatization of Pennsylvania's liquor stores and increased taxpayer support for school choice.

In January, Turzai announced that he did not intend to run for reelection at the end of his term. He formerly launched a bid for governor in 2018, but dropped out of the race after the Republican party endorsed Scott Wagner, who eventually lost to Gov. Tom Wolf.

Turzai spoke Wednesday about his record in state government and said he looks forward to seeing someone else take on his role.

“The job, the position, is not mine,” Turzai said. “I’m a steward. I get to sit in a beautiful office and get to meet people from all walks of life. And now it will be somebody else’s turn. And that's good.”

Some early names floated as potential replacements for the Speaker role include Majority Leader Bryan Cutler of Lancaster County, Republican Whip Kerry Benninghoff of Centre County and Appropriations Chairman Stan Saylor of York County, according to the Associated Press.

It is believed that Turzai will enter the private sector, taking a job with Bryn Mawr-based Essentially Utilities Inc., which was acquired earlier this year by People Gas in Pittsburgh, the Post Gazette reported.

His resignation comes after the legislature voted to lift Wolf's pandemic disaster declaration, setting off an apparent power struggle in Harrisburg. The governor withdrew the state's stay-at-home order earlier this month, but renewed the disaster declaration for 90 days.

The governor explained that the health department's orders in the Disease Prevention Act, signed by health secretary Dr. Rachel Levine, covers the state's restrictions on which businesses are permitted to operate, and under what terms, during the pandemic. Wolf said those orders are separate from the disaster declaration and would not be overturned by ending it.

In a statement Wednessday, Wolf outlined how lifting the declaration would alter the availability of resources for state agencies involved in the pandemic response, including those involved with unemployment compensation, utility assistance and meal distribution

Republicans in the Senate, who have been vocal about their opposition to shutdowns, argued Tuesday that the GOP-controlled legislature has the power to pass a resolution ending the disaster declaration first issued on March 6, according to the Associated Press.

Wol indicated that he would veto any concurrent resolution on lifting the disaster declaration and will take the issue to court.