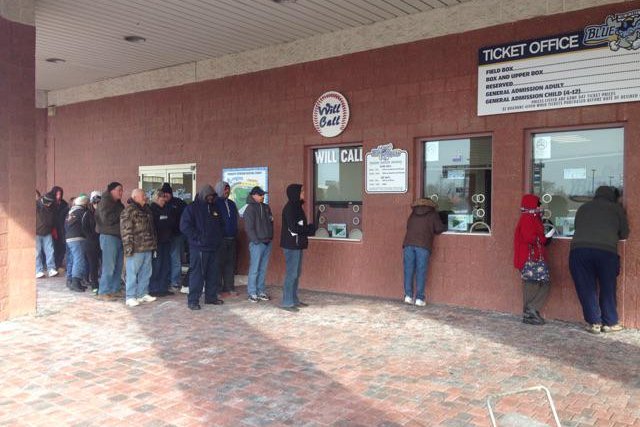 The Wilmington Blue Rocks, a Class A affiliate of the Kansas City Royals, let Mother Nature set the market price for tickets to their home opener against the Frederick Keys on April 16.

As part of a promotion to jumpstart ticket sales, the team decided they would sell tickets at a price equivalent to whatever the thermometer read at 8 a.m. on Monday morning, the first day individual game tickets went on sale. Not only was it one of the coldest days in recent memory, but they decided to match the price in pennies, not dollars.

The result? Prices that resembled Sixers' second-market prices in 2013.

Yup. Fans could buy opening day tickets for just four cents each, a small consolation for those who braved the weather Monday morning while waiting in line at the Blue Rocks ticket sales window.

It was 4 degrees at 8 a.m. so tickets for Opening Day are 4 cents! There's already a line waiting. pic.twitter.com/IDQ6oKhEpR

But you didn't have to wait in line to buy your four-cent ticket. Fans could also purchase tickets by phone or online, however that came with a five dollar service fee.

It could have been worse, as ESPN's Darren Rovell writes:

As the bitter cold reached a new level last week, [the team's director of tickets Stefani] Rash wasn't too sure her department would be making any money at all from the promotion.

"We told fans if it was zero or below, we'd give tickets out for free," she said.

Twelve players on the Kansas City Royals' World Series roster last year at least stopped in Wilmington on their way to the majors.  [via espn.com]

Rovell also writes that the team sold "about 3,600" tickets and "more than 200 fans took advantage of the chance to buy up to eight tickets for 32 cents total."

Last season, when the team first trotted out this promotion, tickets sold for 20 cents each. They usually go for anywhere from $4 to $11 dollars.