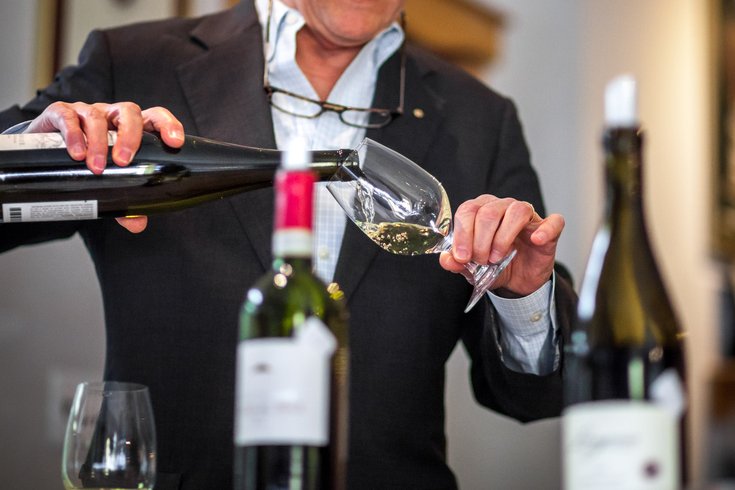 Greg Moore pours a glass of 2004 Ratzenberger Riesling for a tasting. Moore Brothers, a Pennsauken wine shop, has done business for two decades with the Ratzenberger family of Mittelrhein, Germany.

Almost everything about Moore Brothers is a bit atypical – partly by design, partly by serendipity.

Their flagship wine shop, located in a nondescript office park in Pennsauken, is maintained at a deliberate 56 degrees, the perfect temperature to preserve the freshness of the product.

Less calculated was the brothers' path to selling wine.

“There’s nothing in our background” that naturally led to wine retailing, says Greg Moore, who’d planned on a career as a fine arts painter.

His brother, David, was a rock drummer, though he jokes he mostly performed in Holiday Inn lounges.

“It’s serendipity,” says Greg Moore of a career path that has taken the brothers to wine regions around the world. But they always come home.

The Moores have been selling wine in South Jersey for 20 years. The store at 7200 N. Park Drive is easy to miss, but convenient for Philadelphians, just 15 minutes over the Ben Franklin Bridge on a good day. Thousands of South Jersey residents zoom by every day on frantic Route 130, just yards away.

A deal two decades ago on an inactive liquor license – just $75,000 – came along just as the brothers were scouting New Jersey locations. But they had just two months to close the deal before the license expired. And they had to lease space from the guy selling the license.

They were looking in New Jersey, of course, because Pennsylvania's peculiar laws prohibit the private retailing of wine.

Staying close to Philly was important, however, as the place where the Moores came up – by happenstance – through the first wave of the restaurant revolution in Old City during the 1970s. 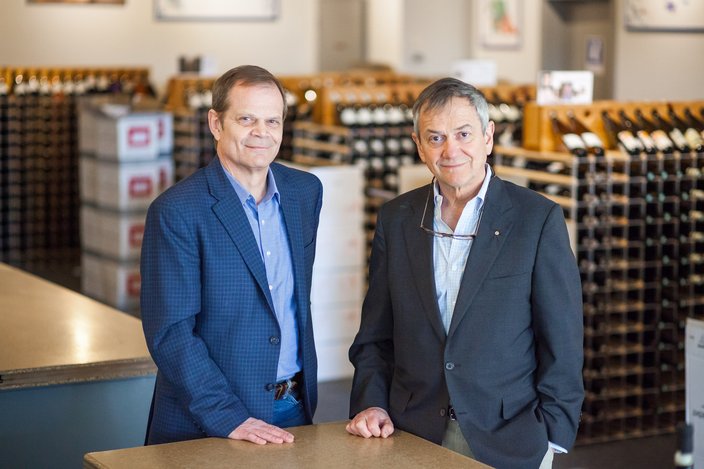 “I needed to take care of myself,” says Greg, then a painting student at the Philadelphia College of Art.

Janine Mermet, a true war bride known for her French-American cuisine, put him to work at her seven-table eatery, presided over by a Basque chef with no facility in English. One of the waiters wore a special uniform and doubled as “the wine steward.”

“And I thought, ‘That guy is cool.’ I was hooked" on restaurants, recalls Greg.

Mermet moved on to a new restaurant, La Truffe, and Moore followed. She became “like a big sister,” and gave him the “lay of the land.” The place also introduced him to wine, which assured he saw wine as food, an important part of the meal, not just something wet to wash down a meal.

At Moore Brothers, each wine comes with a printed backgrounder, including food pairings. But the staff confidently makes additional food suggestions.

Greg Moore heard about an opening on the staff at Perrier's new restaurant. He went and applied the same day, getting hired.

As the new hire, he oversaw the cumbersome dessert cart, but that also made him the de facto assistant sommelier, and in just two years Greg was running the wine program, including buying. Some of the wine available at Moore Brothers today he sold first at Le-Bec Fin.

He began talking about wine, first at a charity event, then at formal classes, firming up credentials and growing his name recognition.

Meanwhile, David had followed him through several of the same restaurants, eventually becoming the sommelier and maitre’d at Déjà-Vu, another top-flight restaurant in Center City, as well as the wine guy at Jack’s Firehouse in Fairmount.

A friend of the Moores began a tiny wine shipping company in 1993, and through that business emerged a plan for the brothers to work together as wine retailers.

A big part of the Moore's business model was to control the movement and storage of every bottle of wine, every step of the way. Thus the wine on display at the store is kept at cellar temperature, to keep it from being stressed by heat or fluctuating temperatures. (They'll lend you a jacket to keep comfortable.)

The sales plan was to behave like a brokerage business, buying from suppliers too small to attract the attention of big companies, vintners and growers the Moores meet with personally, often breaking bread or lodging with them as a part of doing business.

"They treat the wine well. They vet it out. They know the geography – which side of the hill the winery is on. And they know the people who make the wine." – customer Ralph Loielo, of Philadelphia

The wine sold at Moore Brothers was artisanal before marketers made that term just another buzzword.

“It’s about family farms and stewardship, traditions and families. Loyalty,” says Greg, mentioning suppliers with whom they have nearly two decades of experience. For instance, they now buy from the grandson of one of their original producers.

Moore Brothers soon outgrew their original space, relocating to a larger building just a few yards away. They’ve since added stores in Delaware and New York.

A recent visit to the Pennsauken location highlighted their customer service-oriented approach and attention to detail.

There’s no beer for sale, and almost no liquor, save for some brandies and a crème de cassis.

Every day, four bottles – two white, two red– are open, available for free tastings. At Moore Brothers, the wine is poured by the store’s well-schooled staff, not spokesmodels.

Each wine comes with a printed backgrounder, including food pairings. But the staff, which tastes all of the wine, confidently makes additional food suggestions.

Open seven days a week, popular mini-lectures are offered frequently on Saturdays, built around a particular wine and vintner. 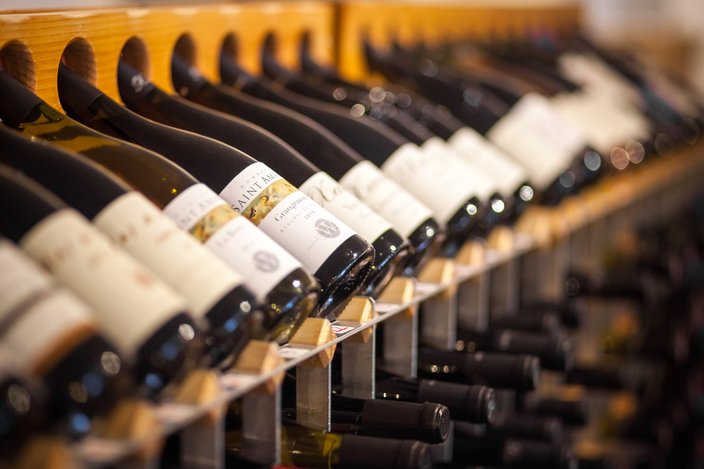 The Moore Brothers Wine Company store is kept at 56 degrees to ensure the proper preservation of the wine while it sits on the shelf.

On this day, when Greg Moore uncorks a particularly loved late harvest Riesling from the Ratzenberger family, whom he visits yearly, the store staff crowds in, anxious for a new sample – sniffing, swirling and tasting the wine's deeply complex flavor.

“It’s in perfect shape. Uniquely impeccable condition. No one wants to acknowledge that fresh wine is better. It’s like milk, it spoils,” he says.

And while there is a spittoon on the tasting table, no one uses it after a short pour of the German Riesling.

"First, I don't have access to a good wine store where I live," he explains, after tasting from the tables. The concept works: he adds a few more bottles from the tasting to the two cases of wine he'd already pre-ordered online.

And while he could stop at what he calls a "warehouse" filled with wine and maybe find a few bottles he might enjoy, he's confident he'll always find wines he likes at Moore Brothers.

"They treat the wine well," he says. "They vet it out. They know the geography – which side of the hill the winery is on. And they know the people who make the wine. Sometimes I will come over on a Saturday for a favorite winemaker," mentioning two by name.

Many of the store’s customers are just regular folks looking for a nice bottle and some reliable advice.

“It’s all about relationships."