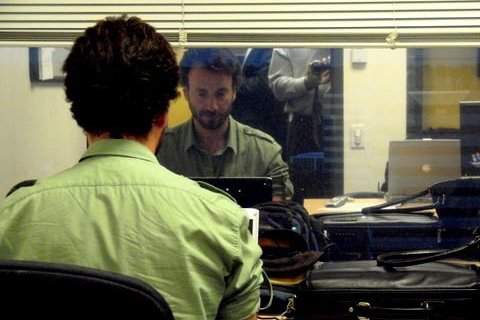 Philadelphia freelance writer Bob Finkelstein was diagnosed with multiple sclerosis more than a decade ago. His medications would jump from $7,000 to $32,000 a month if the Affordable Care Act is repealed and not replaced.

U.S. Sen. Pat Toomey hasn’t been getting a lot of good press when it comes to constituents seeking access to their legislator’s ear.

Much of that comes from a “Tuesdays with Toomey” contingent that shows up at his Philadelphia office on JFK Boulevard, buoyed by the desire to get heard by their elected representative on a variety of topics. (Tomorrow's visit will focus on education, specifically the group's opposition to Betsy Devos' nomination as education secretary.)

That trend continued last week when Bob Finkelstein, 49, a freelance writer from Northern Liberties who’s been living with multiple sclerosis for more than a decade, wrote an open letter to Toomey regarding the Affordable Care Act (ACA) that was posted on PhillyVoice around around noon on January 13.

He, too, was frustrated about the lack of access to Toomey after calling to request a meeting and showing up at the local office, only to be “asked to fill out a form in the building’s lobby” earlier this month.

“Given the urgency of current actions in Congress, I am hoping you or your office will arrange to meet with me soon,” he wrote. “I am requesting a meeting because I think it will be helpful for you to see for yourself the box of injectable medication that I have taken over the past 12 years to prevent my white blood cells from attacking my brain and spinal cord, preventing the paralysis and possible early death that is common with the illness I live with.”

He closed that column with a note that he’d “respectfully wait for your reply and hope to hear from you soon.”

He didn’t have to wait long.

“I wouldn’t be doing this if I didn’t think there was hope. We need to let people know what’s at stake.” –Bob Finkelstein

Around 5 p.m. that same day – his letter gained widespread attention and was noticed by the National Multiple Sclerosis Society’s local chapter, which shared it on social media – Toomey's scheduler emailed Finkelstein.

While the staffer didn’t mention Finkelstein's letter, they wanted to know when he’d be available to meet with a staffer at the Philadelphia office.

That meeting took place on Monday.

No, Finkelstein didn’t meet with Toomey personally. But he met with a staffer and tried to make his case against the Trump Administration gutting an ACA that keeps management of his disease within fiscal reach. MS is an often disabling disease of the central nervous system that disrupts the flow of information within the brain, and between the brain and body.

Finkelstein said the half-hour meeting covered most of the topics he wrote about in the piece. Afterwards, he was told his concerns would be taken to the senator.

While he didn’t “go in to be confrontational,” Finkelstein still doesn’t know whether his story would impact Toomey’s stance on the health care law.

“I’m still concerned. I still don’t know what the senator’s stance is,” he said. “I had very specific questions about policy, and I told them that this isn’t just about me, but it’s about a lot of the senator’s constituents, and it could have a life-or-death impact.”

Finkelstein, who brought a box filled with his collection of medication– his costs would jump to $32,000 a year if the Affordable Care Act is repealed and he has to go back to his previous policy – requested that Toomey’s office put together a Town Hall-type meeting. There, others in the same position as him could share their views on the issue with Toomey.

“They have people’s lives in their hands, and I wanted to make it clear that their decisions could kill people; that, if people died, it’d be their responsibility,” he said. “I told (the staffer that) if I couldn’t afford to take these medications, I would get paralyzed, or face an early death.

“This has real implications, and I wanted him to hear from me and all the people like me in the state he represents. I think it’s important to have a place for people to share our stories. There are thousands of us. There are 23,000 people in Pennsylvania with MS. The senator needs to understand that, and that he’s responsible for what happens to all these people if he doesn’t assure access to affordable healthcare.”

Finkelstein kept his affliction hidden from most friends until he wrote the column because “I don’t like to share it; people look at you differently.” Now, he will speak Wednesday night at a Drexel University’s College of Medicine forum on the ACA.

Sure, he realized that his Monday meeting might not sway Toomey, nor the Trump Administration and Republican-controlled Congress, to rethink their views on the ACA. But, that won't stop him from trying.

“I wouldn’t be doing this if I didn’t think there was hope,” he said. “We need to let people know what’s at stake.”