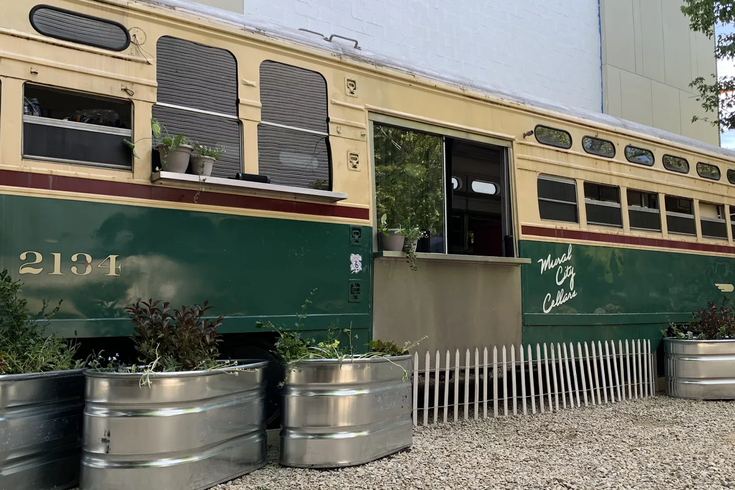 Mural City Garden, a community-focused wine garden, opened on Frankford Avenue on Thursday. The new space is an expansion of Kensington's Mural City Cellars urban winery, which opened in 2020. Wine, beer and non-alcoholic drinks will be served on Thursdays, Fridays and Saturdays.

Urban winery Mural City Cellars is opening a wine garden on Frankford Avenue in Kensington on Thursday, which will host weekly events for the whole community.

Mural City Garden is open on Thursdays, Fridays and Saturdays in a previously empty lot owned by the New Kensington Community Development Corporation. In addition to wine, the garden is also serving a small selection of locally-sourced craft beer, non-alcoholic drinks, and food from neighborhood vendors.

Public events being held at the wine garden include block parties, outdoor movie screenings, pop-ups, and vendor markets. One of its first big events is the inaugural Philly Queer Flea, which takes over the space on July 23 from 1 to 8 p.m.

Mural City Cellars' owners, Nicholas Ducos and Francesca Galarus, were given permission to open the wine garden following the development corporation holding an open call for applicants to take over the space at 2211-17 Frankford Ave. Several other local businesses responded — including Tired Hands Brewing Co. — but Mural City emerged as a clear neighborhood favorite.

"We were really pleased by the strong response," said Nicole Westerman, NKCDC's director of real estate and economic development. "We gave the community an opportunity to participate, they took it seriously, and told us what they thought. And we got to taste delicious wine, beer and bagels on a perfect Saturday night."

Ducos told Axios Philadelphia that the neighborhood response is the reason why they have the space. Therefore, in addition to utilizing larger space for the winery, Ducos wants the wine garden to be mutually beneficial to other small businesses in the community.

The menu features both Mural City Cellars original wines, selections from its Community Supported Winery, and a slew of guest wines from other small-bath wineries. The full list is below, and all prices are by the glass.

Tomato pie slices are available for $6 from Liberty Kitchen, and cheese and charcuterie boxes are available for $20 from From Marjorie. The old-school trolley car used to serve the drinks may look familiar to some residents, both from Fishtown and other parts of the city. If you're wondering where it's from, it's the original 1948 PCC trolley car that was originally housed outside of the now-shuttered Trolley Car Diner in Mount Airy.

When the diner closed in 2019, owner Ken Weinstein originally sent it to Fishtown to be housed outside of the Fillmore back in 2020. Weinstein bought the trolley car — one of the last to run to Willow Grove Park in 1957 — from SEPTA in the 1990s. Safe to say, this car has been making its way around the city for years already.

It was a gift to the Fishtown Kensington Business Improvement District, who later decided to convert it for use at Mural City Garden. Though it wasn't officially announced, some excited prospective customers at the wine garden immediately noticed it on Instagram when the car arrived on site earlier this week.