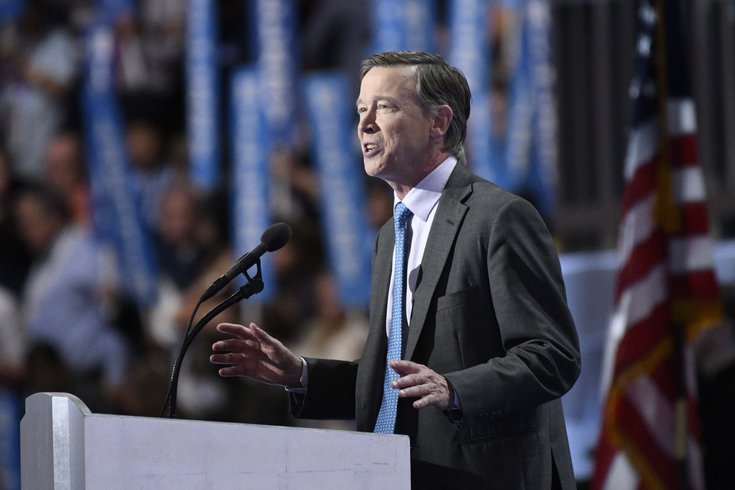 John Hickenlooper, the former governor of Colorado and Montgomery County native, is running for president.

The two-term Democratic governor announced his presidential bid on "Good Morning America" on Monday, saying "I believe I not only can beat Donald Trump, but that I am the person that can bring people together on the other side and actually get stuff done."

MORE: Everything you wanted to know about the 'steel furnace letter' but were afraid to ask

BREAKING: "I believe that not only can I beat Donald Trump, but that I am the person that can bring people together on the other side and actually get stuff done." John @Hickenlooper tells @GStephanopoulos he is running for president in 2020. https://t.co/XJol1V6FDs pic.twitter.com/YBDMurotGP

In a campaign video released Monday morning under the slogan "Stand Tall," Hickenlooper said he would run "because we're facing a crisis that threatens everything we stand for."

"As a kid with Coke bottle glasses and a funny last name, I've stood up to my fair share of bullies," he says in the video. "Standing tall when it matters is one of the things that really drives me."

Hickenlooper, 67, grew up in Narberth, Montgomery County, with his mother and three siblings. His father died when he was 8 years old after a battle with intestinal cancer. His mother, Anne Hickenlooper, is descendant from the Morris family who were among the earliest settlers of Philadelphia in the 1600s. She graduated from the Agnes Irwin School in Rosemont, Montgomery County, and later attended Vassar College.

Main Line Today reported Hickenlooper first attended had Ardmore Junior High, where he never fit in with classmates, "mostly due to his hypercompetitive and argumentative traits." His mother decided to enroll him at the Haverford School, where he joined the soccer team and baseball teams. He graduated in 1970, and then attended Wesleyan University where majored in English.

He later earned a master's degree in geology and in 1981 he moved to Colorado to work in the oil industry. Interestingly, he ventured into brewing beer after he was laid off and would go on to open 15 pubs and restaurants in the Midwest.

His political background in Colorado began in 2003 when he was elected mayor of Denver and then in 2011 as Colorado governor for two terms. During his tenure he expanded pre-K, pushed Medicaid expansion, gun-control legislation like universal background checks, passed recreational marijuana regulations, and helped the state usher in an economic boom (especially in rural parts of the state).

Hickenlooper joins 15 other Democratic candidates who will challenge President Donald Trump in 2020. And there are more likely to announce their candidacies in the coming weeks. He's only the second governor to join the crowded 2020 race for the Democratic nomination for president.

He'll kick off his campaign on Thursday with a rally in Denver and then head to Iowa.