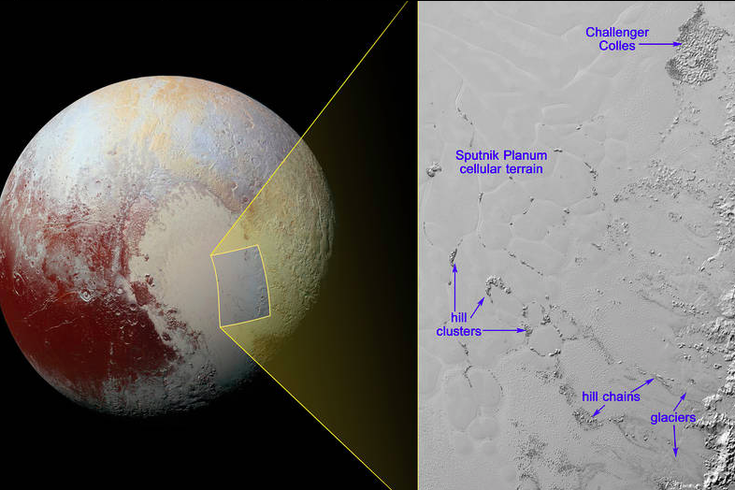 Hills of water ice on Pluto ‘float’ in a sea of frozen nitrogen and move over time like icebergs in Earth’s Arctic Ocean.

For much of the past year, scientists on NASA's New Horizons mission have scoured through images of Pluto to analyze the geographical features of the dwarf planet. After publishing shots of mountain ranges, craters and possible ice volcanoes, the space agency on Thursday released what appears to be evidence of several large iceberg clusters.

The New Horizons team closely examined images of a vast ice plain within Pluto's heart, known as the Sputnik Planum, that contains several isolated hills believed to be fragments of water ice.

The mysterious hills, measuring anywhere from one to several miles across, appear to be chunks of Pluto's uplands that broke off and were gradually carried by nitrogen glaciers and carried into Sputnik Planum, according to an analysis data captured by by New Horizons' Multispectral Visible Imaging Camera.

Scientists believe the hills are floating in a stream of frozen nitrogen and drifting in a manner comparable to the icebergs found in Earth's Arctic Ocean. As the hills press toward the center of Sputnik Planum, they appear to form clusters stretching up to 12 miles across. The biggest of the clusters, featuring dozens of icebergs, measures 37 by 22 miles.

The images were taken on July 14, 2015, when the New Horizons spacecraft flew 7,800 miles above Pluto's surface and became the first spacecraft to explore the dwarf planet.