The Boston Celtics are (apparently) on the verge of a meltdown

...and that's great news for the Sixers. 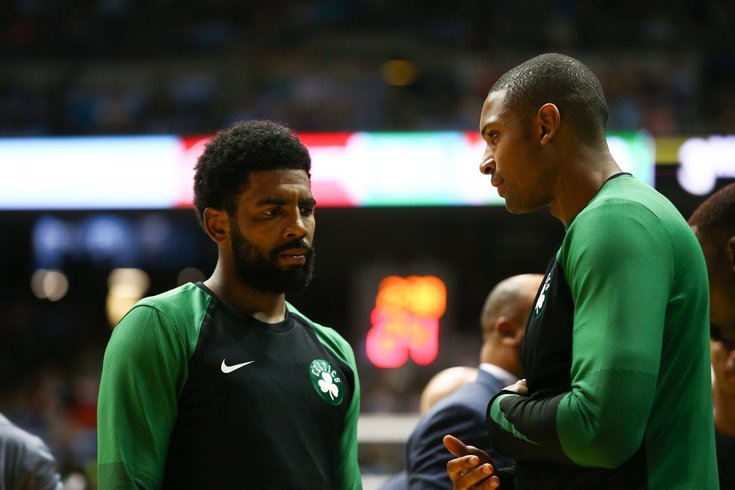 Boston Celtics guard Kyrie Irving talks with forward Al Horford in the second half of a game against the Charlotte Hornets.

Just one year ago, the greater Philadelphia area was convinced the Sixers were never going to be able to beat the vaunted Boston Celtics. They had overtaken the young Sixers with a young skeleton crew of their own, and they were set to get Kyrie Irving and Gordon Hayward back to start the 2018-19 season. Some predicted 60+ wins for Boston, and the Sixers openly admitted their defensive adjustments in the offseason were made with the memory of the Boston series hanging over them.

Along the way, Boston fell off the face of Irving's flat earth, and now the franchise looks to be in serious jeopardy moving forward, at least as a serious contender.

After reports circulated on Tuesday morning that Al Horford would decline to pick up his $30 million player option for next season, the broader assumption was that he would re-commit to Boston on a longer-term deal. But as of Tuesday night, Horford appears destined to leave the Celtics, and Steve Bulpett of the Boston Herald first reported that Horford would no longer be discussing a pact with Boston.

Major change in the Al Horford situation:
Per source close to Horford, his side is no longer discussing a new 3-year deal to stay with the Celtics. He is expected to sign a 4-year free agent contract elsewhere...
Story to come.

A flurry of reports came in from the heavy hitters following the report, and Irving's long-assumed exit has only picked up steam since Boston's season ended in a second-round defeat against the Bucks. Shams Charania of The Athletic has reported that the Celtics are preparing for a future without their two best players.

Where does that leave everyone? Glad you asked...

The top of the East is there for the taking

For Philadelphia, the chaos in Boston is obviously great news. A team that was presumed to be one of their biggest long-term hurdles in the Eastern Conference is about to collapse, leaving the Celtics with little to show for years of asset collecting.

As long-term pieces that are part of a bigger puzzle, Jayson Tatum and Jaylen Brown are guys who have proven they can produce under pressure. Marcus Smart is one of the league's best perimeter defenders and a complete pain in the butt to go up against every night. But unless one or both of those first two guys takes a tremendous leap forward, they are still missing the star (and arguably, two stars) who is really going to drive the program forward.

Unlike some of the other cap space teams this summer, the Celtics don't appear to be any sort of threat for a big-ticket free agent. The history of the franchise suggests that has almost always been the case for Boston, but more relevant to the present day, it certainly doesn't look great to guys on the outside when your two best players and biggest free agents say thanks, but no thanks to sticking around.

Anyone advocating for the Sixers to "run it back" in free agency this summer should be emboldened by this turn of events. Toronto is the baddest team on the block for the time being, but Kawhi Leonard could be taking his talents out west. The Bucks were tremendous and have perhaps the league's best young star, but they have tough decisions to make in free agency this summer and could look very different next year. Boston is imploding. The Indiana Pacers, disciplined though they may be, have few options to lure another star and their best player is coming off of a serious injury.

That doesn't mean the Sixers are simply going to rise to the top of the East if they can bring all the major players back next season. Assuming that would be just as reckless as thinking the Celtics would walk to 67 wins this season.  But the Sixers have every right to believe they can contend with this group next season, and have to attack the offseason with that sort of mindset.

Regardless of what Boston is doing, they do appear to be leaning that way on their own. Inspired by how close they came to upending the Raptors, the Sixers are looking for players who can come in and help them immediately. As Elton Brand said on Tuesday morning, they want someone who can be in their top eight as soon as next season.

With this new development in Boston, I would suspect the Sixers continue to travel down that path.

One of Embiid's best defenders is likely leaving a division rival

Perhaps a small-ish thing compared to the grand scheme details, but worth noting in any case. Horford gives Embiid fits.

A reminder to treasure moments of contention while they are there

With all of the above being said, there is an important thing to remember — the Sixers could very well lose Jimmy Butler and Tobias Harris this summer. JJ Redick's future is uncertain, and it's hard to know if they can afford to keep any of the role players who actually helped in the playoffs this year, like James Ennis.

You don't ever have any idea how long a title window is going to be open, if it ever does for your team. That's a lesson that should have been underlined in bold ink after the Golden State Warriors fell apart this year, but it's one we are taught over and over again throughout history.

The Oklahoma City Thunder had three future MVP's on one roster and only appeared in one Finals. The mid-80's Rockets kicked the crap out of the Lakers and looked to have the world in their hands, only for Ralph Sampson's body to give out, delaying their success for another decade. Shaq and Penny Hardaway disrupted the East in the mid-90's, but they only got one swing at the league's top prize before it all fell apart.

There are dozens of competing interests when building an NBA team. Can you fit this player under the salary cap? Can you keep this player happy with fewer touches? Can you draft well enough to restock the pipeline as you go further and further into financial hell? Is your star-laden team healthy when it matters, and most importantly, are they good enough to take a seven-game series against the league's elite when they are?

Again, this offers even stronger incentive to run things back and keep the same players in place. It is rare that you're able to build a core with the talent level the Sixers had in last year's playoffs. Not all of their top guys performed at an elite level, but they disrupted the opponent in various ways. Tobias Harris left opponents with nowhere to hide defenders, Ben Simmons chased Kawhi Leonard all over the court for 48 minutes a night, and JJ Redick forced players to run through and around screens to contest shots that didn't always come.

There are arguments to be made about whether Harris is worth a max contract, whether the Sixers should look for a younger and more athletic player in Redick's spot, and how much money they should set aside to get a competent backup behind Joel Embiid. What is clear, though, is that they probably have a real chance with this group if they can keep them together and building chemistry.

Elton Brand is aware of this. When he made the splashy trades to bring Harris and Butler in to begin with, he recalled his own playing days and the scarce opportunities he had to contend. It is his responsibility, he has often said, to deliver a talented supporting cast for the Sixers' young stars so they have the best possible chance to succeed as long as they're in Philadelphia.

As the assumed exodus in Boston shows, you're only a couple of decisions away from retooling and going down a new path. The Celtics have done plenty right as an organization over the last half-decade, and it may end up that none of it matters, because their biggest dice rolls came up snake eyes.

So it goes. It's a reminder to treasure these opportunities while you can.