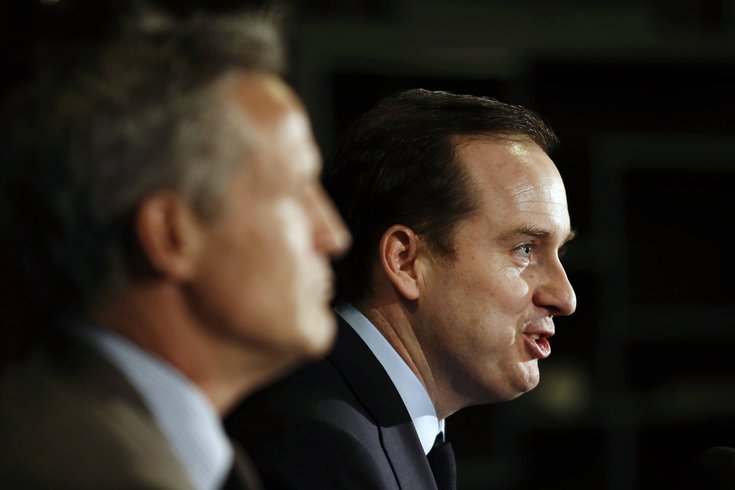 Coming into the NBA trade deadline, we had the feeling that the Philadelphia 76ers would generally sit this one out. That said, just in case something crazy happened like last year's Michael Carter-Williams deal, Matt Mullin and I wanted to document our live reactions.

In this running diary, we talk "The Process" while reacting in real time to the deadline, which the Sixers finally got involved in at the very end.

RICH: We already had some activity at the trade deadline (Channing Frye to Cleveland is interesting, for instance), but nothing really from the Sixers yet. I know we all think there is a good chance Jerry Colangelo and Sam Hinkie are going to stand pat, but Sixers fans may riot if all they get is a Kendall Marshall rumor:

Sources: As Bucks search for ways to reshape guard depth, they've checked on bringing back 76ers Kendall Marshall. For now, no traction.

Today, the lottery, and the draft are basically holidays at this stage of The Process

MATT: But should they riot? At some point The Process has to move on to it’s next stage: building a contender. That’s never going to happen if they keep blowing up the team at the deadline every year. I get being on board with The Process, but eventually don’t they want to exchange those three holidays (the deadline, lottery and draft) for playoff berths?

Jahlil Okafor's attorney tells me a judge has ruled that plea deal in Okafor's speeding case is valid. $439 fine, but no community service

(Not really, but hey, it’s something)

MATT: Let’s just hope he’s not taking care of all his business quickly because he thinks he’s on his way out of town…

Let’s put it this way, if the Sixers don’t do anything, what (realistic) moves could they have made that would have inspired the fan base?

RICH: As far as the rioting goes, I think Sixers fans are part of a larger trend in sports: We like the transaction more than the action. And in the eight-win Sixers’ case, the transaction is all that they have. “I don’t care what is, just do something to make the team different” feels like the mentality. There is a reason that the NBA is more relevant than ever in those first few weeks of July.

In general, the only realistic major move left on the board is trading Nerlens Noel or, more likely, Jahlil Okafor. And I think there is an argument to be made that would be better off happening in the offseason.

MATT: To your first point, I understand that the only real “wins” for Sixers fans have come when Sam Hinkie has pulled off some head-turning trades. It just shocks me that this fan base — one that was willing to believe in a Process that would take years to complete — would suddenly rather the team make moves just for the sake of making moves.

RICH: What’s shocking about it? Moves are fun, man!

MATT: But isn’t that a shortsighted approach for fans that have already invested long-term rebuild process? Don’t get me wrong, I love a good WojBomb as much as the next guy…

RICH: In the Sixers’ case, most of Sam Hinkie’s trades have looked good on paper in terms of that long-term rebuild simply because he was playing on a timeline that is so different from the rest of the league. "Have a point guard that we know can’t shoot? Sure, I’ll take this pick that *might* be fourth in the draft."

This guy would be a good Sixer, just not at this stage unfortunately.

The Rockets have been making calls in the last few hours checking to see the value of PG Patrick Beverley, sources said

MATT: Yes, but for how much longer can he be allowed to operate on that timeline? Anyway, let’s get back to the more immediate and specific issue — today’s deadline.

Speaking of point guards, anything going on with the duo from Atlanta?

RICH: Nope, but this could be of interest to the Sixers:

But Sacramento, according to ESPN sources, has not yet abandoned its trade pursuit of Chicago's Pau Gasol with just under an hour to go

MATT: Because of how it could impact a potential pick-swap between Sixers and Kings?

By the way, this is so Kings. They’re looking to acquire a 35-year-old impending free agent (who very likely won’t sign there) that plays the same position as their best player.

Here is an Atlanta update, by the way:

League source: Jeff Teague is off the market. If Sixers are still interested in Dennis Schroder, haven’t made formal offer to Hawks yet

MATT: Yes. That is very Kings.

What do you think the Sixers would have to offer for Schroder to tempt the Hawks?

RICH: The Miami pick or Robert Covington, maybe? Here’s my problem with Schroder: I’m not sure he’s any good. And in the case of Teague, he doesn’t fit the Sixers’ timeline, which is what we were talking about earlier: When do the Sixers become buyers? Because this will be the third year that they haven’t even thought about it.

MATT: I’m pretty sure I saw that same exact tweet (the second one) last year in reference to Hinkie…

RICH: That’s what #FormerSixer JaVale McGee’s acquisition was all about.

RICH: It’s pretty dead now (and it could stay that way), but this is a good point. I forgot how late in the game that the MCW deal happened, a couple minutes after 3:00 p.m. if I remember correctly:

MATT: Yeah, I think it’s because they all clog their fax machines sending proposals…

RICH: There’s a decent WojBomb. Morris, of course, is a Philly kid.

Phoenix has traded Markieff Morris to the Wizards, reports @ShamsCharania and @WojVerticalNBA.

MATT: You know it’s a good WojBomb when he tweets in third person.

RICH: It certainly has been in previous years. And you clearly posted the Heath GIF because of the school bus that crashed into the bank earlier today.

MATT: Rich, what have I told you about stealing my jokes from Twitter?

Wait, isn’t this how the Dark Knight started? https://t.co/EbrdGqVgzW

MATT: But honestly, I wish this deadline was half as exciting as that movie was…

Thank god I set an alarm for 3 p.m. because I was dozing off there for a minute. Let’s recap the trade deadline so far…

RICH: Tobias Harris and Markieff Morris… That was disappointing. So, what do we make of the Sixers? Seems like they weren’t ready to make a deal for any of their young guys. We have been hearing for a while now that this summer will be the time for fireworks, and today didn’t do anything to change that.

MATT: If anything, it reinforced that. Do you think it’s just coincidence that Hinkie’s first quiet deadline was also Colangelo’s first with the team? I know the roster didn’t offer as many trade options as they’ve had in previous years, but I’m shocked they didn’t do a single move…

RICH: Yeah, I’m surprised they didn’t at least get to the salary floor. As for Colangelo, that’s the $64,000 question.

MATT: Right. I figured at the very least they would wiggle their way into another deal as the third team or, like you said, take on an expiring contract to get them to the floor.

RICH: There’s a bomb after the buzzer:

Source: Lance Stephenson has been traded to Memphis

Well there’s exactly the kind of move we were talking about. But will he even get them to the floor? He only makes $2.5M, correct?

Philadelphia will receive a future second-round pick to take on Anthony and his contract, sources tell @TheVertical.

RICH: Yes, and they were previously at $60.3 which would leave them just slightly under the $63 million floor if my math is correct.

The #sixers are sending the rights to Chukwudiebere Maduabum as part of the Joel Anthony trade.

MATT: I guess we can forget about Chu Chu…