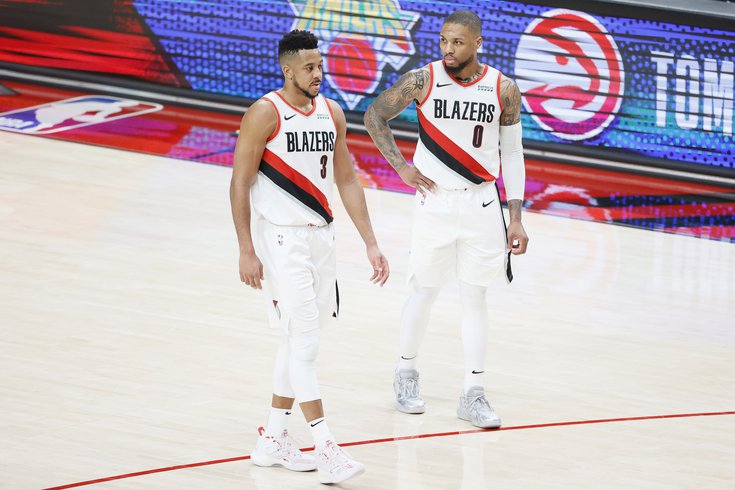 The Sixers and Trailblazers have been tied at the hip in the rumor mill for the back half of 2021, and it doesn't look like there's any end in sight. As Philadelphia continues to look for a solution to the Ben Simmons conundrum, Portland is working through problems of their own.

The latest word out of Portland comes from Sam Amick and Shams Charania at The Athletic, a look into Damian Lillard's way of thinking and where the franchise goes from here. While the focus of their story is on items that are splashier in Portland than Philadelphia, like the discontent in the locker room over Chauncey Billups' coaching style, it's Lillard's interest in Simmons that is relevant here:

Lillard intends to give the Trail Blazers organization time to find its next leader of basketball operations. But beyond the front office component, the face of the franchise still wants significant changes to the roster. Multiple sources have told The Athletic that Lillard would like to play with Philadelphia 76ers three-time All-Star Ben Simmons. The Trail Blazers’ league-worst defense would instantly improve, and sharing a backcourt with a non-shooter could work given Lillard’s high-volume usage.

Sources say the Trail Blazers, under Olshey, discussed the framework of a trade for Simmons, moving CJ McCollum, a first-round draft pick and a young player such as Nassir Little or Anfernee Simons to Philadelphia. The 76ers, sources said, at one point asked the Trail Blazers for McCollum and multiple draft picks and multiple draft swaps, which Portland rejected. Olshey maintained significant confidence in the roster he constructed. Now, it’s unclear if there’s a deal to be had with the 76ers. But with Olshey out, who among chair Jody Allen, vice chair Bert Kolde and Cronin would be the one making the call on a Simmons trade or any acquisition designed to alleviate Lillard’s concerns?  [The Athletic]

Lillard, to the surprise of almost no one, had something to say publicly shortly after the reporting dropped on Monday morning:

These mfs love drama too damn much. https://t.co/ej15TkAybZ

While granting that dealing with constant rumors and speculation has to be no fun, there are only so many plugged-in reporters who can come to the same conclusion over the course of six months before Lillard is basically the guy in a hot dog suit from "I Think You Should Leave," looking for someone to blame while standing next to the Oscar Meyer car that just crashed through a storefront.

In any case, the Simmons angle is more pertinent to us than the overall Lillard picture, because the Sixers' interest in Lillard and desire for him to ask out of Portland is an open secret at this point. McCollum is the man in question this time, and his fit in Philadelphia matters more now that Neil Olshey is gone.

It all starts with shooting for McCollum, who brings a combination of efficiency and volume to the table no one on the Sixers comes close to matching. He takes 2.6 more threes per game than their highest-volume shooter (Georges Niang), three more threes per game than their sharpshooter in starting and closing lineups (Seth Curry), and he connects on 39.3 percent of those shots this season, a number that is more impressive when you consider how many of those shots are coming off-the-dribble.

Among 27 players who use at least seven possessions per game as a pick-and-roll ballhandler, McCollum is tied for third in efficiency, scoring 1.01 points per possession out of those looks (and we'll revisit that group in a second). It's easy to see why when you watch the Blazers — McCollum is an accomplished multi-level scorer who can beat you from midrange, use touch around the basket, and kill teams when they go under screens in on-ball actions. The Sixers found that out the hard way during a recent meeting in Portland, with McCollum comfortably stepping into open threes with rookie Charles Bassey in drop coverage.

McCollum's crunch-time credentials are obscured a bit by his partnership with Lillard, who is a one-man force late in games that often dominates the ball. But with his crafty ballhandling, comfort getting his own shot, and effectiveness from multiple spots on the floor, McCollum would pretty easily be their best option on the perimeter if they acquired him in a trade, and he's a guy who could pair with Embiid in any number of critical sets. But there are definitely issues with McCollum as a headliner, and the fit might not be as clean as you'd think.

For one, McCollum isn't helping with any of their defensive problems. His size (around 6'3") and lack of explosive athleticism limit him on the perimeter, and even if you think the combination with Lillard has made both players look worse than they'd be in other lineups, the same problems await him in Philadelphia. Whether the combination is McCollum-Curry or McCollum-Maxey, the Sixers would be demanding even more of Joel Embiid on the back end than they already are, and leaky perimeter defense would likely be an even bigger problem the deeper they get into the season.

MORE: The current state of Ben Simmons trade talks and what Sixers want if they move him

As a playmaker, McCollum also profiles like a lot of the guys they have on hand — decent, but nothing special. Watch him operate in the average Blazers game and you'll see that most of McCollum's helpers come on fairly basic reads, strong side kick-outs to shooters or drop-offs to rolling bigs. If you're looking for a guy who can be a crunch-time anchor for your lineup, you need them to be an elite-level scorer who draws enough attention to open windows for other guys, or a plus-playmaker who can see two steps ahead and pass someone open through vision and guile. I also have some doubts about trying to fold Embiid into a style that works for McCollum rather than vice versa. The Blazers' guard has played with bigs who predominantly skew toward a roll-or-pop style, and it's a much different world in Philadelphia. Perhaps McCollum makes up for whatever dent to his playmaking that would represent by beefing up their outside scoring, but it's a question mark all the same.

Frankly, the biggest problem is resource management. I think McCollum is a more dangerous offensive player than Seth Curry, but Curry is giving you a huge chunk of McCollum's production for around a quarter of the cost, which is not an insignificant detail. And circling back to the aforementioned pick-and-roll ballhandler group, Tyrese Maxey is one of the players tied with McCollum for the third slot among high-volume players, a reflection of the step forward he has taken this season. McCollum's contract, escalating to over $35 million in the final year of his deal in 2023-24, is an impediment rather than an asset. He's a productive player, but when a guy gets paid elite-type money for sub-elite production, it makes it hard to trade them to whoever you want, whenever you might want.

And that last part is critical for Philadelphia. Daryl Morey is after stars, or "impact players" as he and the organization have put it. If the Blazers were suddenly willing to offer a huge pick bounty plus McCollum and other stuff for Simmons, perhaps that changes the conversation a bit. But those assets are almost certainly more valuable in an immediate three-team trade where someone they really want comes to Philly, with McCollum being re-routed somewhere else. Making a deal in the hopes you can trade McCollum and stuff for an even bigger fish down the road invites a lot of unnecessary risk. From the beginning, my understanding is that the Sixers want to make their big move and be ready to roll from there, rather than trying to piece it all together over multiple transactions that drag on over time.

(Maybe you could argue that if they acquire McCollum and a surplus of assets, the pieces they have in place become more expendable. You could start thinking about, for example, what a Maxey/Curry/picks and salary fodder package would fetch from suitors around the league, offering a promising young player and a great role guy on a great contract on top of whatever ammo you can offer in the draft. But the low-combined salary makes it hard to get anyone of consequence, and Philly is short on guys who can just be tossed into a deal with no consequences. Danny Green's $10 million is far from a throwaway contract with the state of this rotation. If the Sixers went that route, they'd also start getting into territory where they're completely reshaping the team on the fly, asking Embiid to rebuild chemistry with another offensive partner after he has taken great care to find the sweet spot with Curry. If the price is right, sure, but there are a lot of ifs.)

If the question is whether the Sixers would have a better chance to win games with CJ McCollum (and a Portland role player or two) instead of an in-exodus Ben Simmons, the answer is an obvious yes. But the Sixers would end up boxed in without realistic title-contending upside for at least a couple of seasons, which is not where you want to be with Joel Embiid in his prime. And that's the reason they have made over-the-top asks of Portland whenever the teams have touched base — the Sixers are after titles, not a Band-Aid. But perhaps the instability in Portland will force both sides to chat a bit more in the coming months.