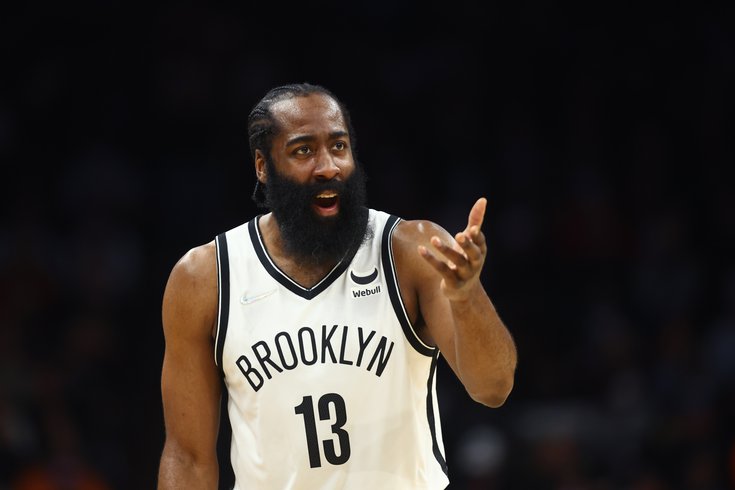 Finding people you can trust and believe in this time of year is quite tricky in the NBA, but ESPN's Brian Windhorst is sending a message loud and clear right now — he believes James Harden is pushing for a deal to get done, and that talks are more serious than some people seem to be letting on.

Windhorst, whose comments about "The Deal Zone" inspired a lot of bad Kenny Loggins jokes and photoshops on Twitter, joined Mike Greenberg to discuss the latest in the rumor mill on Wednesday morning. And the veteran reporter was pretty emphatic about what he sees in front of him.

"I know that Steve Nash and others are saying there's nothing happening, but that's not true," Windhorst said. "The sides are absolutely talking, absolutely negotiating. Yesterday, the 76ers were out looking for other moves, talking to other teams about other moves, moving players, opening roster spots, leading those teams to believe they were getting ready to make the other deal. They have swapped offers, and really right now it's about haggling the ancillary parts. Does that mean it's absolutely going to get done by tomorrow? No, I can't say that, I'm not sitting in the room, it's complicated. But the way I describe this is they are in the deal zone right now. I am leaning toward this probably happening, I don't want to guarantee it or anything, but I think we're headed in that direction.

I can't tell you how much James Harden wants this. You've got be very careful using the q-word or saying whatever, but his actions over the last 10 days are basically a threat to the Nets. What he did in Sacramento last week, at that time the Nets had lost I believe five or six in a row, Durant was obviously out and they're playing in Sacramento, that's a game they've got to win for about five different reasons. And just to frame this, James Harden, until he hurt his hamstring in the first quarter of a game last spring, and had to leave a game in the first quarter, he had scored in double figures in 450 consecutive games...he then had a streak of 44 consecutive games. Last week in Sacramento, he played 37 minutes and scored four points. That doesn't even articulate the effort level he gave on defense in that game, and then he basically shut it down for the rest of that road trip.

Harden's on-court performance in Sacramento has been scrutinized all across the league from the moment it became clear he was mailing that game in, a loud message that followed weeks of reports about his unrest and quotes in the press that didn't exactly flatter the situation in Brooklyn.

These sort of reports, mind you, are why the Sixers have tried to maintain their discipline as they work through this process with Brooklyn. If Philadelphia had simply been willing to fork over anything and everything the Nets wanted to get Harden, you get the feeling a deal would have been done already. But as one source who spoke to PhillyVoice last Friday noted, the turmoil in front of Brooklyn is a big reason why Philly believes they can and should get a deal done using only Ben Simmons and minimal assets/salary fodder beyond their disgruntled star.

"Brooklyn would love to get a 25-year old, multi-time All-Star who is under contract for multiple years in exchange for a guy who is unhappy and not under contract long term," a source said to PhillyVoice last Friday.

MORE: Live NBA trade rumors: Sixers, Nets are 'in the deal zone' for Harden trade; Philly shopping Tobias Harris | Where do Sixers' James Harden talks stand with one day left until the deadline? | How much is too much for Sixers to offer for Harden?

As Windhorst noted during his segment, debate over the secondary pieces in a deal is one of the biggest stumbling blocks so far. The Sixers have protected young guard Tyrese Maxey throughout discussions with the Nets, and Matisse Thybulle is a player they would like to keep in almost all scenarios here. Seth Curry is viewed as the best available secondary piece in a Simmons-Harden swap, sources say, though there has been pushback from Sixers sources on Curry as well. The overarching theme is that these teams both believe they can play hardball — the Sixers are threatening to acquire Harden this summer without needing to compensate Brooklyn at all, and the Nets have tried to convince the Sixers they can still make a title run with this group and ultimately convince Harden to stay.

Over the last few days, there has been more noise regarding the possibility of signing Harden outright leaking out of the organization. The potential of trading Tobias Harris to clear cap space is something we detailed here on Tuesday evening, with the Thunder one of the obvious candidates to take on Harris' deal for the cost of some draft compensation. In that scenario, the Sixers could move Simmons to another team with space, either picking up a bundle of future capital to hold onto or re-route for a present-day upgrade.

One source who spoke to PhillyVoice early Wednesday morning also noted the following — don't rule out the potential for Philadelphia to waive and stretch Harris' contract if the team feels that puts them on the cleanest path to Harden in the summer. The Sixers value Harris' contributions and see the lift he has given them after finding his form recently, but he's not going to be the roadblock that prevents them from acquiring Harden or a Harden-level player.

The Nets, meanwhile, know the Sixers would love to put a capable co-star next to Embiid during an MVP-caliber season, capitalizing on a window to contend that might be shorter than anyone likes. Beyond the implications for Philadelphia's title odds, there's also a financial advantage to getting Harden here now rather than trying to tie everything together in the summer. Acquiring Harden and his Bird rights would mean being able to give him an extra year on his next contract and more money than other teams can offer.

To that end, ESPN's Adrian Wojnarowski seemed to throw cold water on Windhorst's reporting on the very same show, noting that he is not hearing the things that others are when it comes to a Sixers-Nets deadline deal.

"Right now, there's no negotiation going on between Philadelphia and Brooklyn," Wojnarowski reported Wednesday. "The idea that they are going back and forth that's been surmised by some, I don't believe that to be accurate."

That jives more with the reporting we have done here at PhillyVoice, and it's important to include all of these perspectives, because it feels like the teams are going through a list of reporters and simply telling them the opposite thing as the last guy/girl at this point. Whoever you choose to believe, you have to accept the idea that someone else with a reputation for accuracy is saying the exact opposite.

In any case, you can watch Windhorst's full segment below, and as I feel like I have written 75 times by now, buckle up. Chaos reigns.