Will Ben Simmons still be on the Sixers after the deadline? Maybe, but the team is already preparing for life without him. 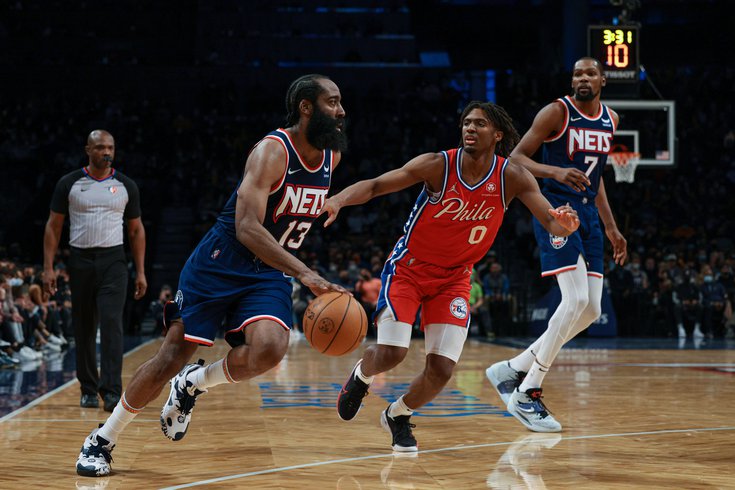 UPDATE [3:05 p.m.] — According to Keith Pompey of The Philadelphia Inquirer, both Matisse Thybulle and Seth Curry (not to mention a first-round pick) have been mentioned in trade discussions between the Sixers and Nets ahead of Thursday's deadline.

Multiple league sources have said that Thybulle’s name has been mentioned as part of a potential deal for James Harden ahead of Thursday’s 3 p.m. NBA trade deadline.

One source said Seth Curry and a first-round pick have been mentioned along with Thybulle. A person close the Sixers disputed the package centered around Simmons for Harden. ...

One league source said the Sixers are unwilling to part ways with their young stars, Thybulle and second-year point guard Tyrese Maxey.

A source said as of Wednesday afternoon, a deal isn’t as close to being finalized as people think. The Nets and Sixers engaged in informal trade discussions Tuesday and, according to sources, bickered over pieces to add to a potential deal.  [inquirer.com]

Will a deal centered around James Harden and Ben Simmons get done in the next 24 hours? Stay tuned...

UPDATE [1:14 p.m.] — To those Sixers fans who have been feeling pretty good about the prospect of a James Harden trade on Wednesday following Brian Windhorst's reporting, fellow ESPN insider Adrian Wojnarowski has some advice for you: not so fast.

According to Woj, "Right now, there's no negotiation going on between Philadelphia and Brooklyn. The idea that they are going back and forth that's been surmised by some, I don't believe that to be accurate."

It's also worth noting this, which Kyle Neubeck pointed out when giving his take on the subject:

[Woj's report] jives more with the reporting we have done here at PhillyVoice, and it's important to include all of these perspectives, because it feels like the teams are going through a list of reporters and simply telling them the opposite thing as the last guy/girl at this point. Whoever you choose to believe, you have to accept the idea that someone else with a reputation for accuracy is saying the exact opposite.  [MORE]

UPDATE [12:20 p.m.] — According to ESPN's Brian Windhorst, who was the star of the initial iteration of this post, not only is a deal between the Sixers and Nets involving James Harden and Ben Simmons trending toward happening, but Harden himself is "screaming" that he wants out of Brooklyn.

"Right now it's about haggling the ancillary parts. Does that mean it's absolutely going to get done by tomorrow, no I can't say that... But I am leaning towards this probably happening. I don't want to guarantee it or anything, but I think we're heading in that direction."

Added Windhorst later, "I can't tell you how much James Harden wants this (trade)."

Well that's certainly something. You can watch the full interview with Windhorst on with ESPN's Mike Greenberg, right here:

You can read more from Kyle Neubeck, here.

Twas the day before the NBA trade deadline and all through the league ... absolutely nothing is quiet because every GM is leaking so much information that it's impossible to think straight.

Ah, these are the days.

With Thursday's 3 p.m. deadline rapidly approaching, and deals being made around the NBA, it's now or never for the Sixers if they want to bring in James Harden for a title run. Except it's not. Because there are multiple ways for Daryl Morey and Philly to try to add the former MVP.

The simplest, obviously, is trading for him before the deadline. And after a few days of it looking more and more like a deal would have to wait until the offseason, there's suddenly some momentum.

“We are in the deal zone between Harden and Simmons,” per @WindhorstESPN on @GetUpESPN

Well that's certainly a change in things and certainly is worth tracking over the next 24-plus hours. And if the Sixers are able to land Harden now, and pair him with an MVP-caliber Joel Embiid, Philly would immediately become the favorite to win the Eastern Conference, regardless of who they have to throw in as a sweetener.

But then there's the other end of the spectrum, with a contradictory report coming from The Philadelphia Inquirer's Keith Pompey on Wednesday morning.

"Multiple sources said the Nets and Sixers engaged in trade discussions Tuesday and bickered over pieces to add to a potential deal," Pompey wrote.

MORE: Where do Sixers' James Harden talks stand with one day left until the NBA trade deadline?

If a deal doesn't get done before the deadline, the Sixers have maintained through their own leaks that they're confident that Harden will opt out of Brooklyn in the offseason and they'll be able to sign him. To that end, whether it's posturing or not, Pompey reports that the Sixers have already engaged in conversations with the Thunder about unloading Tobias Harris' massive contract.

Sources also confirmed that the Sixers have had conversations with the Oklahoma City Thunder about Tobias Harris. A person close to the Sixers downplayed the discussions, saying the Thunder are just one of several teams with available cap space that have inquired about taking in salary in exchange for draft picks. The person says Harris has nothing to be concerned about.  [inquirer.com]

According to our own Kyle Neubeck, the Sixers have at least two teams in place that would be willing to take on Harris' salary if they needed to dump it in order to make room to sign Harden. (You can read more from Kyle on what the Sixers are willing to give up and what other deals they might make right here.)

It would be hard for Philly to justify trading Harris as a salary dump in-season with Embiid playing at an MVP level, but Morey appears to be playing the long (or at least medium) game when it comes to building a contender. That might not be the safest bet given Embiid's injury history and the current level at which he's playing, but right now the best, most direct path to contention is acquiring a top-tier asset like Harden, Bradley Beal or Damian Lillard. And if that has to wait until the summer at the expense of Embiid's best season as a pro, that appears to be a price Morey is willing to pay.

But with the latest report from Windhorst that a deal could be progressing toward getting done ahead of the deadline, maybe it's not so crazy for Morey to begin looking now for potential outs with Harris.

Even if Morey can't get a deal done, Pompey says the team could still begin preparing as if they're going to sign Harden in the summer by trading Harris ahead of deadline, which would be the loudest signal yet to Brooklyn that the team is beyond confident that Harden not only wants out of Brooklyn, but he's willing to opt out and sign in Philly (costing him some of the money he would be entitled to in a sign-and-trade).

There have been whispers about the possibility of the Sixers shipping Harris to the Thunder before the deadline as a salary-cap dump.

If that happens, some expect the Sixers will attempt to dump Simmons’ salary to another team that can take on his contract in exchange for assets around June’s draft.  [inquirer.com]

It's shaping up to be an interesting trade deadline for sure, even if it's just a bunch of smoke and no actual fire.

MORE: How much is too much for Sixers to offer for James Harden?

We'll have you covered with all the latest news and rumors leading up to the deadline. And, of course, by the time I post this there's probably already a new rumor for me to update you on, so let's not waste any more time.