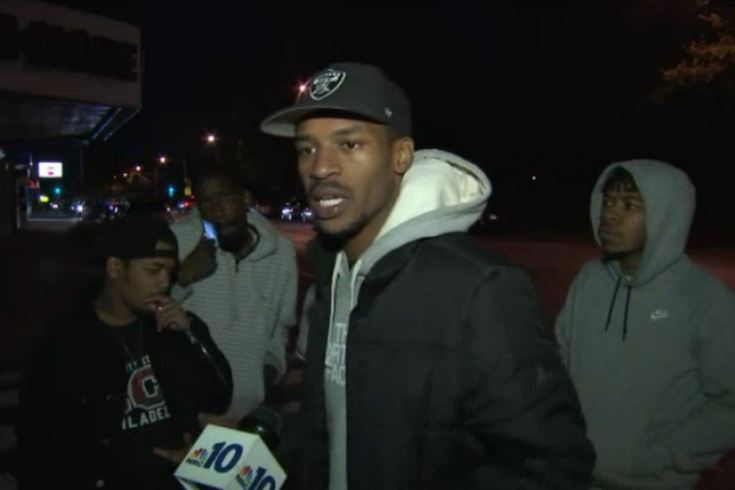 Richard Benson posted a Facebook Live video from inside a Stenton Avenue Checkers restaurant that ended up costing him, and several co-workers, their jobs this week.

Here’s what you need to do, like, right now: Head over to NBC10’s website and watch their five-minute interview with Richard Benson, aka OZ Phantom, aka King Phantom, aka the dude who forced the Checkers location where he worked since April to temporarily shut itself down to take a "Silkwood shower" this week.

The nanny state – armed with health-inspection reports – would tell you that he’s responsible for a 44-minute Facebook Live video in which employees of that Yelp-challenged Stenton Avenue fast-food restaurant talked about washing the floor with hamburger buns, spitting on food, going glove-free during food prep and other unsavory things.

This is troubling stuff.

The societal construct between restaurant and consumer is predicated upon the understanding that food will be prepared in a safe fashion, without the fear of long waits because employees are fornicating inside.

Sure, he totally posted that video that someone swiped off his Facebook page and sent off into the viral stratosphere.

But here’s what he wanted NBC10’s audience – and, by proxy, the world itself – to know: He was fronting. None of that stuff really happened. It was all a publicity stunt to further his side careers as a comedian and a rapper. And he not only feels really bad that he cost co-workers their jobs but also that it’s been perceived as disrespecting his already-challenged community.

He has posted a Facebook apology, which you can see right here, profanities and all:

I can't go live and play with mfs nomore they be thinking I'm serious and take shit to the heart, Yea I said alot of foul shit but I never did nothing to nobody Food, I changed gloves and wash my hands off camera like 15 times, if you watch the whole Vid all I'm doing is Talking Shit but I never actually did nothing! What I did was called A PUBLICITY STUNT! But y'all believe what y'all want Yea it was a Very dumb decision,I do apologize to All but my intentions were Marketing so I said dumb shit to make ppl watch and it Went Viral for the wrong reasons, I lost my Job, My family, And can possibly lose My freedom! I'm 💯 So I ain't bitching or nothing it is what it is, I just wanna let ppl know why the dumb shit happen I'm not no filthy ass n***a and would never do that to ppl especially My ppl. You live and you Learn and Boy did my Ass Learn... Never Again!

If you don’t have bandwidth to open another browser window, here are the highlights of that interview:

“The caption of (the video) was ‘Girls doin’ it in the bathroom,’ but there wasn’t any girls doing it in the bathroom. I was saying it because I knew it’d draw attention. ‘Aw man, he said he was going to do that with the bun. Lemme tell my friend to watch this,’ so I knew it’d go up. … It was basically a publicity stunt that went wrong.”

You can say that again.

“When you’re done going (Facebook) Live, it asks you if you want to post it or delete it. I deleted it! You know, it’s not professional. I’m not gonna put that on the internet. … This girl from Facebook, I don’t even know her name, she somehow downloaded the video, put the whole thing up and made it like we was nasty. … She probably is a hacker, man.”

Deleting it wouldn’t help garner attention but, whatever, I don’t even grasp why people post quick-to-disappear Snapchat videos. Also, the dude behind Benson during the video, yeah, the one who was smoking a blunt throughout, got a kick out of those comments.

“I’ve been working at Checkers since April. I get tips. Checkers don’t even get tips. I get tips. That’s how good I am. I do everything in Checkers.”

You might want to walk that "everything" comment back; kinda takes away from your denials and whatnot.

“I had to clear my name. I wouldn’t do that to my community. I wouldn’t do that to people, especially my people. I’m not gonna do that to no black community. Not to be racist or nothing, but black lives matter. We need more than we got now, so to have less, it’d mess everything up. We have a lot of African-American workers in there and now a lot of people don’t have jobs because of me and I feel bad because it was all a joke.”

That right there is real af.

“God works in mysterious ways. Everything happens for a reason so I’ll leave it up to him. … Whoever ordered that day, your food was properly cooked, properly made, properly prepared.”

At this point of the interview (3:33 in), he then used his remaining camera time to share a song he wrote that namechecks Mike Brown, Brandon Tate-Brown, Freddie Gray, Sandra Bland, Natasha McKenna, Eric Garner, Laquan McDonald, Tamir Rice and others who died at the hands of police.

Then, he shared his Instagram, Twitter and other social-media handles before closing the interview with the declaration that “I’m just here to clear my name.”

“I didn’t do nothing to nobody’s food. Watch my videos, watch my soundcloud,” he concluded. “Y’all can hit me up and let me know what you think. Talk to me. I’m open. I’m here. I’m around.”