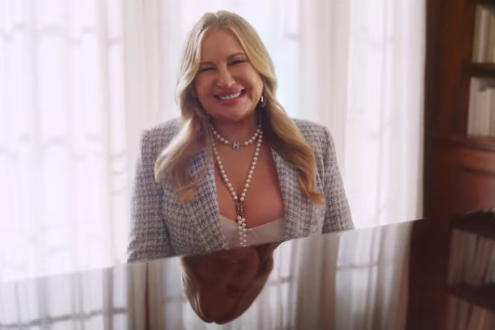 Jennifer Coolidge stars in Netflix's first teaser trailer for its limited series called "The Watcher." The show will be a fictionalized version of the true story of the Broaddus family, who moved into an upscale home in Westfield, NJ, only to be tormented with letters from an anonymous stalker.

Netflix has released a teaser for its upcoming limited series "The Watcher," based on the experiences of a New Jersey family that was tormented by an anonymous stalker as they tried to move into a new home.

The show chronicles the chilling ordeal of Derek and Maria Broaddus and their children at 657 Boulevard in Westfield, New Jersey. Ryan Murphy, of "Glee" and "American Horror Story," is a co-creator on the series.

New York Magazine's The Cut first detailed the Broaddus family's story in an article published in November 2018 (it was most recently updated on Monday). A month after the article was originally released, Netflix won a tight bidding war involving six studios for the film rights to the story.

The streaming service released its first trailer for the show on Sunday.

In the unconventional three-minute video, "The White Lotus" star Jennifer Coolidge plays realtor Karen Calhoun and guides an open house of the 657 Boulevard property. At first glance, it could be a regular tour of a nice home in an upscale neighborhood – but the vibe is slightly off.

At one point, Coolidge references the fact that an entire body could fit in the home's dumbwaiter. In the grand bedroom, she warns: "But you want to keep the curtains closed. You know, there's a lot of weird neighbors and stuff out there." The video is full of extra-long pauses and taglines like "This won't last!" that likely seem eerie to those who know the story on which the show is based.

Along with Coolidge, the series stars Bobby Cannavale and Naoimi Watts as Dean and Nora Brannock, who put all their savings into their dream home. Unfortunately, upon arrival, they find a less-than-welcoming neighborhood full of nosy and standoffish residents, including kooky older woman Pearl (Mia Farrow) and her brother Jasper (Terry Kinney). Things take a turn toward the sinister when the family starts receiving terrorizing letters from someone called "The Watcher."

Character names may have been changed, but the essence of the story is similar to the frightening reality of the original incident.

The actual account of the Broaddus family and "The Watcher" is stranger than fiction itself.

Just a few days after the Broadduses closed on a six-bedroom house in June 2014, Derek checked the mail. With renovations left to take care of, the couple and their three children had not yet moved into the home. What Derek found in the mailbox set actions into motion that would ensure 657 Boulevard never felt like home.

In a letter addressed to "The New Owner," the anonymous author introduced themself as someone put in charge of watching the house, waiting for its "second coming" as the home approached its 110th birthday:

If that wasn't creepy enough, the author identified the family's car, noted angrily the construction they were doing on the house, and remarked upon the "young blood" (children) the Broadduses brought to the address. The letter was signed "The Watcher."

Increasingly unhinged letters followed, identifying the names of the children and specific details the Watcher only could have known through close reconnaissance. At one point, the stalker asked about one of the children that they had seen using an easel on an enclosed porch: "Is she the artist in the family?"

The Broadduses spiraled into anxiety and fear as they conducted their own investigations and got the police, private investigators, and FBI involved in attempts to find out the identity of their stalker.

They looked at former housekeepers, interested buyers who lost out on the house, previous owners and their neighbors. At one point, a main suspect was next-door neighbor Michael Langford, a reclusive man in his 60s who lived with his mother and siblings. Later on, investigators found that the DNA on one of the envelopes belonged to a woman. Some neighbors even hypothesized that the Broadduses sent the letters to themselves as part of an elaborate scam.

Each lead ran into a dead end due to a lack of evidence, and to this day the identity of "The Watcher" remains unknown.

Upon learning the previous owners of 657 Boulevard received correspondence from "The Watcher," the Broadduses filed a legal complaint in 2015 stating that they should have been warned. The suit was dismissed.

After years of harassment, isolation and media attention, the Broadduses sold the Dutch Colonial revival in July 2019 for around $400,000 less than they bought it for. They had previously been forced to rent it out, since the sharing of the Watcher's letters with potential buyers scared them off. Plans to tear down and redevelop the home were shot down by residents of the wealthy neighborhood.

Amidst the chaos, Derek admitted to The Cut that he once hand-delivered anonymous letters to the mailboxes of families who were most vocal against the Broadduses online. One person who received a letter said it seemed eerily similar to the Watcher's poetic style. Derek claims these were the only anonymous letters he ever wrote.

"The Watcher" will be released "soon" on Netflix, according to the teaser. A Tweet by Murphy places the premiere in the fall, and speculation by What's on Netflix has the streaming service eyeing an October 2022 release, adding the show to its Halloween lineup.

This isn't the first attempt at fictionalizing the Broaddus' experience. In 2016, despite a cease-and-desist letter from the family, Lifetime released a horror movie called "The Watcher."

To prepare for the upcoming release of the series, those interested can read the full story of the Broaddus family's harrowing experience in The Cut's article.