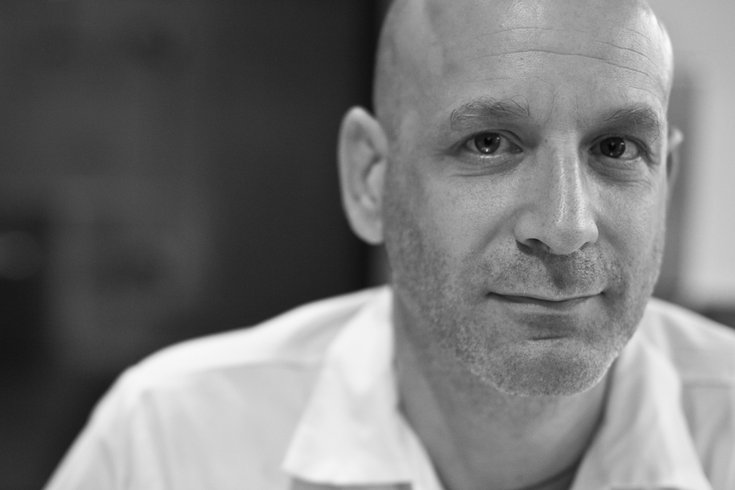 Vetri’s third cookbook, "Mastering Pasta: The Art and Practice of Handmade Pasta, Gnocchi and Risotto," (Ten Speed Press) is filled with mouthwatering photos and recipes and tutorials on how to get your dough just right

Chef Marc Vetri and his business partner Jeff Benjamin opened their influential flagship Vetri in 1998. Since then, they’ve grown the “Vetri Family” to seven restaurants and counting, plus a successful charitable foundation. And in the meantime, the two have developed a rock-solid partnership. (“He is, for sure, the yin to my yang,” Vetri has said of Benjamin.)
Each has a new book out this month, giving readers insight into both Vetri’s legendary skills in the kitchen and Benjamin’s innate talent for making every guest feel at home.
Vetri’s third cookbook, "Mastering Pasta: The Art and Practice of Handmade Pasta, Gnocchi and Risotto," (Ten Speed Press) is filled with mouthwatering photos and recipes and tutorials on how to get your dough just right — plus a discussion of the science of wheat and wheat flour.
Benjamin’s "Front of the House: Restaurant Manners, Misbehaviors and Secrets" (Burgess Lea Press, available March 31) is an entertaining look at how much hard work goes into seemingly effortless hospitality, with funny anecdotes that show what happens when things don’t go as planned. The book also gives tips on how not to be that clueless guy (or gal) who disrespects staff and annoys fellow customers.

Vetri contends that pasta is one of the most difficult things to teach young restaurant cooks.
“They have this notion that there’s the noodle and then there’s the sauce — that you can stick any noodle with any sauce and that will basically work. It’s really hard to take them out of that mindset,” he says.
Indeed, that tricky “marrying” of the pasta and the sauce is a big focus of the book. (A plate of cooked pasta with a pile of sauce on top? “That’s bulls--t,” writes Vetri.)
So it’s easy to see why, as Vetri says, “the home cook just looks at the whole process as really daunting.” And making it more accessible for everyone was one of the reasons why he wrote the book.
“Just start with store-bought, all-purpose flour and some eggs and get your hands wet and make mistakes — that’s the only way to learn,” he says.
If you don’t have an Italian nonna to walk you through it, Vetri’s book might be the next best thing. In 10 chapters he details how to make more than 30 different types of pasta dough, including extruded and dried pasta, plus gnocchi and perfectly cooked risotto — and how to execute a flawless dish with a slew of seasonal recipes, like Mint Pappardelle with Morels.
Oh, and while it’s true that it’s OK to start out with all-purpose or 00 flour, ever since Vetri attended a seed conference at chef Dan Barber’s Stone Barns Center for Food and Agriculture in 2013, he’s been studying wheat and calling for chefs and consumers to pay as much attention to their flour as they do to their organic produce and meat.
“You don’t know where it’s from, you don’t know how it was milled — you don’t know anything about it,” Vetri says. He says most of the flour in stores today is often old and stale by the time it reaches your cupboard (who knew?).
As Vetri experiments with different types of wheat flour, he’s discovering unexpected notes like tobacco and fruit.
“It’s time that we start thinking about wheat as not just lily-white flour. It’s alive, and it actually has flavor. It has subtle flavors just like red and white wine, and the soil actually dictates what those flavors are,” says Vetri.
Locally, he’s working with Castle Valley Mill in Doylestown and encouraging area farmers to plant more wheat in their fields.
“We’re on the cusp, and we haven’t made a lot of headway yet, but this is what we’re doing now.”

Front of the House

While “unmarried” pasta and sauce is one of the biggest pitfalls in the kitchen, in the dining room, it’s the oblivious customers who threaten to derail a successful evening, according to Benjamin’s book.
There are those who make a reservation and then show up late with extra people and expect to be seated immediately — or, even worse, don’t show up at all. Some diners steal glassware, while another wipes his rain-soaked clothes off with fancy napkins in the middle of the formal dining room, complaining bitterly all the while.
Thankfully, Benjamin and his staff — like beverage director Steve Wildy, aka the “Jerk Whisperer,” who excels at getting belligerent patrons to leave peacefully — are ready to handle almost anyone who comes through the door.
But the book’s focus is not complaining about rude guests. It’s clear that Benjamin, who was “born with the hospitality gene” and started his career as a cater waiter in Long Island, cares very much about both his employees and his customers.
Benjamin encourages diners to always speak up (politely) when they aren’t satisfied to give the staff an opportunity to remedy the issue.
“If you’re in this business and if your goal is to please people, then anytime you haven’t succeeded at that goal and someone can help you in a positive way, you should be willing to have that feedback,” he says.
At the same time, when a customer is dining with small children who are being disruptive, for example, “you gotta consider the whole picture. It’s not just you eating, it’s a whole bunch of people enjoying their night out,” says Benjamin.
Not to say that he doesn’t sympathize with those parents.
“Look, I’ve had my kids in restaurants when they were little and they were just done, and they screamed and yelled and we got up and left,” he says.
The book also gets into the nuts and bolts of running a restaurant group, from staff meetings to the importance of menu design (at Alla Spina, when they changed the unpopular “Welsh rarebit” to “beer cheese toast,” sales took off).
Perhaps most importantly, Benjamin explains that despite many Americans’ condescending attitude toward restaurant workers, the service industry is a noble career path that affords many opportunities for success without the prerequisite of a college degree.
“I have plenty of folks that work for me and this is it — this is their career, this is their livelihood,” he says. So treat them with respect, and always tip well.
Marc Vetri will talk about "Mastering Pasta" at the Free Library of Philadelphia (1901 Vine St.) tonight (March 26) at 7:30 p.m.
100 percent of the after-tax profits of "Front of the House" go to food-related causes, like Drexel University’s Center for Hospitality and Sport Management.