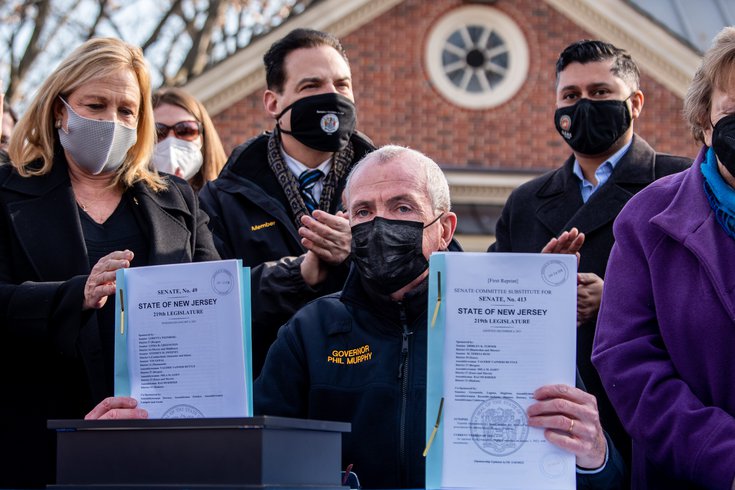 Gov. Phil Murphy renewed efforts to expand access to abortion in New Jersey on Wednesday. The new legislative efforts include reintroducing pieces of the original Freedom of Reproductive Choice Act that were not included in the bill signed by Murphy in January.

New Jersey has already added abortion protections in its state law — Murphy signed the Freedom of Reproductive Choice Act in January, noting his concern for the future of the 1973 landmark ruling that legalized abortion in the country. Rather than basing the state's reproductive health laws on a handful of court rulings, the legislation ensures residents abortion care regardless of the Supreme Court's decision.

Murphy's proposed additions to the state's abortion laws would expand access to reproductive health for New Jersey residents and add legal protections for abortion seekers coming to the state from more heavily restricted parts of the country.

The reintroduced provisions are portions of the original draft of the Freedom of Reproductive Choice Act that were not signed into law. Though the legislation already protects the right to obtain an abortion and the right to access contraception, some other provisions were left out in order to get the bill through the state legislature.

"Revoking the fundamental right to abortion is dangerous and reprehensible, yet the U.S. Supreme Court is nevertheless prepared to proceed with this plan," Murphy said. "Alongside our partners in the legislature, my administration has prepared for this eventuality by enshrining the right to reproductive choice into New Jersey law. We refuse to go backwards on this critical issue and, today, our state moves forward in working to secure reproductive rights and ensure access to the reproductive health care every woman deserves."

Among the expanded protections is a requirement that private insurers cover expenses for abortion without cost-sharing. Another provision would expand New Jersey's pool of abortion providers to include midwives, advanced practice nurses and physician assistants.

In the event of Roe v. Wade's demise, New Jersey would become a hub for out-of-state abortion seekers, particularly those from states with trigger laws or proposed laws to outlaw abortions. Many states that plan to retain their abortion laws can expect an influx of out-of-state travelers seeking safe and effective abortion care.

As a result, some of the proposed additions to the bill include protections from legal retaliation from people seeking or providing abortions.

Public entities, like colleges and government agencies, would be prohibited from cooperating in interstate investigations about abortions. Those in New Jersey who are successfully sued for their participation in providing abortion care would also be able to file a counter lawsuit to recover damages from the initial suit.

"Despite the leaked draft opinion — which, if final, shows the Supreme Court turning its back on the fundamental right to abortion, we believe that everyone should be able to access the health care they need to plan their families — without barriers, bias, fears, or interference from others," said a representative from the Thrive NJ Coalition, a collective of groups advocating for reproductive and sexual health in the state. "Throughout our advocacy for abortion access in New Jersey, our coalition has led with one guiding principle: that rights, without access, are meaningless."

Murphy discussed his proposal to create the Reproductive Health Access Fund to support access to abortion care for people who are uninsured or underinsured. The fund would also expand access to abortion training and fund efforts to secure at-risk abortion providers.

State Senate President Nicholas Scutari and Assembly Speaker Craig Coughlin released a joint statement just as Murphy was preparing to announce the proposed expansions, saying that they "fundamentally believe in a woman's right to choose." The Democratic state leaders added that they will "continue working to protect access and ensure no woman is ripped of her right to choose."

An anonymous legislative source told NJ.com that it appears unlikely that both state legislators would support the expansions if "you read between the lines" of their statement. Republican legislators responded to Murphy's proposals on Wednesday with harsh criticism.

"Governor Murphy's radical proposal calls for free abortions with no limits right up until birth, and he wants struggling New Jersey families to pay for abortions for everyone through even higher taxes and health care premiums," said state Sen. Steven Oroho, who represents portions of Morris and Sussex counties. "His plan to codify that non-doctors can perform the highly invasive procedure of an abortion is just reckless and unsafe for women."

During the first trimester of a pregnancy, "non-doctors" like midwives, advanced practice nurses and physician assistants are able to perform abortions. After 14 weeks, only a certified physician is able to perform the procedure and abortions can only be obtained in hospitals or other care facilities.

If Roe v. Wade is overturned by the Supreme Court this year, 13 states have trigger laws that would immediately ban the practice.

At least 23 states are certain or likely to ban abortion if the ruling is overturned, according to the Guttmacher Institute, a policy and advocacy group working to expand access to abortion rights in the United States.

Places like New Jersey, Connecticut, Delaware and other states that have passed legislation codifying the right to an abortion in their own state laws are poised to become sanctuaries for abortion-seekers from states that institute restrictions on care.

Still, in order to provide care for the proposed influx of people seeking care out-of-state, abortion rights advocates say that states need to expand the quantity of abortion providers, supplies and other resources.

The leaked Supreme Court draft opinion, written by Justice Samuel Alito, rules that there is no constitutional right to abortion, and that it is not "deeply rooted in the Nation's history of traditions." If the draft opinion is final, Roe v. Wade could be overturned this summer, when the Supreme Court is due to publish rulings of in-progress cases.

Though Murphy acknowledges that getting the bills passed out of the state legislature will not be an easy task, he said on Wednesday that the state "has no choice" but to meet the moment and attempt to expand access for residents in New Jersey and those expected to travel to the state for abortion care.

The bills are expected to be officially reintroduced in the state legislature within the next few days.