The child's mother is speaking out against racial discrimination after the incident in Caldwell. The state has a campaign urging residents to fight the invasive species. 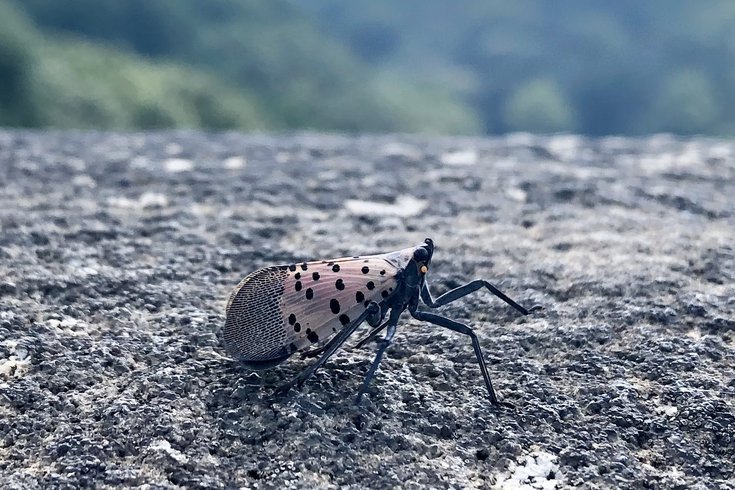 A police officer in Caldwell, New Jersey, in Sussex County, responded to an Oct. 22 call from a neighbor who reported a nine-year-old Black girl spraying trees with a solution used to kill spotted lanternflies. The state urges residents to assist in efforts to eradicate the invasive species.

A nine-year-old New Jersey girl who was spraying a tree outside her home to prevent the spread of invasive spotted lanternflies got a visit from a police officer in Caldwell last month, thanks to a phone call made by a "scared" neighbor.

"There's a little Black woman walking and spraying stuff on the sidewalks and trees," Lawshe said during the call, which was obtained by CNN along with body-worn camera footage. "I don't know what the hell she's doing. Scares me, though."

Spotted lanternflies, native to East Asia, were first spotted in the U.S. in 2014 and have become serious pests in New Jersey, Pennsylvania and several other states in the Northeast and Mid-Atlantic regions. Residents of these states have been actively encouraged by their agriculture departments to fight against the insects by killing the full-grown adults and spraying substances on their egg masses, which appear in the fall and hatch in the spring.

The insects prefer to target trees of heaven, but also can infest a variety of fruit trees, grains, vines and crops. In Pennsylvania, researchers at Penn State University estimated that the insects cost the state approximately $50 million per year in agricultural losses and containment efforts.

"If you see a spotted lanternfly, help us Stomp It Out!" the New Jersey Department of Agriculture's website for the invasive insect says.

When a Caldwell police officer arrived at the scene nearby the girl's home, he asked her what she was doing. The girl explained that she was spraying a tree to protect against spotted lanternflies.

"You're trying to catch them?" the officer asked.

At that point, the girl's mother, Monique Joseph, approached and spoke with the officer, who informed her that her neighbor had called police about her daughter.

"He could have just rang the bell," said Joseph, who feels that Lawshe racially profiled her daughter and could have put her in danger.

The girl, Bobbi Joseph, asked her mother, "Am I in trouble?"

Both the mother and the officer told the girl that she hadn't done anything wrong, and when the officer later explained to Lawshe what was going on, Lawshe reacted as if the girl's behavior was strange.

"What a weirdo, huh?" Lawshe said about the girl in the body camera footage.

Lawshe currently serves as co-chairman and treasurer of the Caldwell Republican Party and has lived across the street from the Josephs for about eight years, Caldwell community newspaper The Progress reported.

Bobbi told the newspaper she had learned about a home recipe for spraying lanternflies from a TikTok video. The girl said she targets both the eggs and the adults, including those carrying egg sacks. The spray is made using water, vinegar and dish soap.

Both Monique Joseph and Bobbi's older sister, Hayden, spoke about the incident at a Caldwell council meeting on Nov. 1.

A NJ resident called police on a 9-year-old Black girl using a homemade spotted lanternfly repellant to try and stop the invasive species from harming trees in her neighborhood.

The girl's mother and sister described the ‘traumatic’ experience at a local council meeting. pic.twitter.com/Xsllfs2TYg

“It is sickening and scary to hear my neighbor use triggering words that have resulted in the deaths of too many Black and brown children and adults at the hands of police," Monique Joseph said. "‘Black,’ ‘hooded’ and ‘I’m scared’ – those are trigger words.”

Lawshe's attorney, Gregory Mascera, told The Progress that Lawshe had apologized to the Josephs and that "Mr. Lawshe told Mrs. Joseph that had he known that it was her daughter that he had seen, he certainly would not have called the police," Mascera said. "Mrs. Joseph did not accept Mr. Lawshe’s apology. Mr. Lawshe again apologized to Mrs. Joseph."

Mascera said Lawshe did not call 911, but instead used the police non-emergency line because he wanted to avoid a confrontation.

Lawshe declined to meet with Joseph and Caldwell Police Chief James Bongiorno because he felt the escalation of the issue was unnecessary after his initial apology. Joseph reportedly had requested, along with Caldwell Borough Council president Jeff Gates, a Democrat, that Bongiorno moderate a discussion between Lawshe and Joseph.

Gov. Phil Murphy tweeted about the incident last week, calling the girl a "community scientist" and writing, "Racism has no home here."

Racism has no home here.

No mother should have to worry about the cops being called on their child for trying to make the world a better place.

Bobbi, your mother was right. You were doing something amazing for our environment. Thank you for being a great community scientist. https://t.co/hKaKOo6oLq

After the story gained national attention, Dr. Ijeoma Opara, an assistant professor of public health at Yale, invited the Joseph family on a "Black girl led science tour" of the campus's research labs. According to Opara, the entomology department told Bobbi that if she collected and donated any more lanternflies to their collection, they would credit her by name.

Twitter fam, thank you for helping me to find the family of the 9 year old girl from NJ who had the police called on her by her neighbor for collecting lantern flies. I connected with them & invited them to @yale for a Black girl led Science Tour! Yesterday—HISTORY was MADE (1/) pic.twitter.com/NV1CGp8Qss