In new podcast, atheist and pastor to explore mystery of Jesus — together 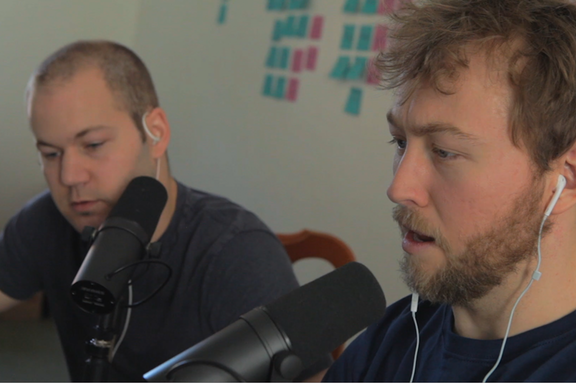 Cory Markum, left, and Drew Sokol recording their new podcast 'Hinge,' which brings an atheist and Christian perspective to the mystery of Jesus Christ.

Jesus Christ: Son of God, or only an influential historical figure?

That's the question Drew Sokol — a Christian pastor — and Cory Markum — an atheist writer — will attempt to tackle in their upcoming podcast "Hinge," tentatively set to premiere in December 2017.

The two form an unusual pair, but that's the point. In a video describing their podcast, Sokol and Markum decry the current state of discourse around hot-topic issues like politics and religion.

That hostility is the inspiration for "Hinge." In the video, Sokol and Markum say they're friends because, not in spite of, their differing viewpoints.

"Though close friends, they'll inevitably collide on numerous issues and will have to face an uncomfortable reality: At least one of them is wrong," the Kickstarter page for the podcast reads.

The podcast is based in Philadelphia, where both men moved to in 2016. Sokol and Markum are seeking $20,000 in donations to produce 10 episodes of the show, and a preview episode is already available on iTunes.

The idea for the podcast started when Sokol, then a pastor in Los Angeles, began feeling doubts about his faith. Although he came through that period with his beliefs intact, the questions lingered.

When Sokol eventually met Markum, he was struck by the fact that despite his opposing viewpoint, Markum "wasn't just trying to attack religion" but instead wanted to "better understand those that he disagreed with," according to the Kickstarter page.

"Hinge" will feature experts and personal anecdotes from both sides of the religious divide.

"These stories, sometimes humorous and uplifting, other times heart-wrenching and hard to listen to, will be weaved into a captivating exploration of history, religion and even scientific discovery about the most revered man in the history of our species," the description reads.

Although Sokol and Markum say their podcast started with lots of momentum, it's currently in jeopardy. The two say on their website their initial funds have been depleted, and the show could never happen if they can't raise more money.

Initially, they're seeking $20,000 on Kickstarter just to produce the first four episodes. With a May 18 deadline, they've only raised $726 as of Thursday morning.

If you're interested in finding out more about the podcast or even donating, you can visit the Kickstarter page here.