Odell Beckham Jr. is also scheduled to meet with the Cowboys and Giants after Thanksgiving, and Carson Wentz lost his job again. 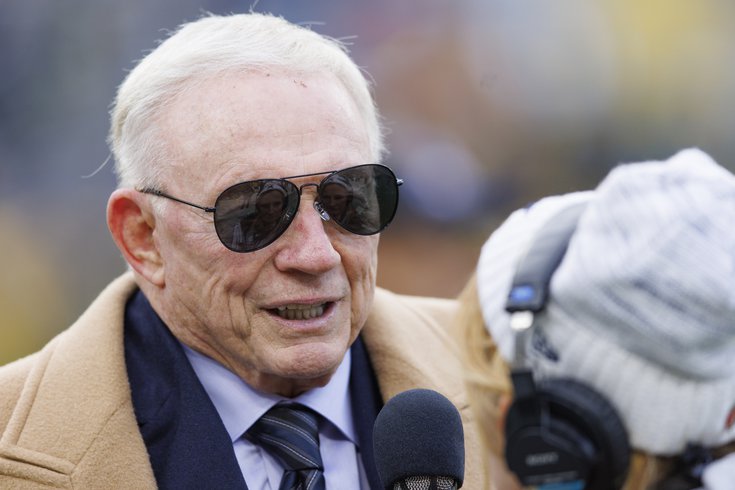 Jerry Jones making sure he gets his TV time.

So who had the NFC East being this loaded after Week 11?

The Eagles beat the Colts to improve to 9-1 and stay atop the NFC East, gained a little cushion too thanks to a Lions blowout of the Giants that dropped New York to 7-3 in second place.

The Cowboys are staying afloat in third, also at 7-3, after pummeling the Vikings 40-3, and Washington, after naming Taylor Heinicke as the permanent starter, are at the bottom but are 6-5 after winning five of their last six – put them in the NFC South and they're leading that division right now.

As the playoff picture begins to form, all four teams could very well be in the running for a postseason spot, and with a race that could potentially be that tight comes a lot of talk, some last-minute adds, and maybe a little knife-twisting too given recent history.

This week brought a little of all three.

Let's start with the talk...

Dallas fancies itself a contender

Last week, the Cowboys got upended by a mess of a Green Bay Packers team while their opponent, the Minnesota Vikings, pulled off a massive upset over the Super Bowl favorite Buffalo Bills.

So how did things for a seemingly reeling Dallas team go against the Vikings, who were competing for the NFC's top seed alongside the Eagles at 8-1?

Welp, the Cowboys completely dominated them 40-3 in a blowout so ego-inflating that Jerry Jones fancies his team a championship contender again.

"A resounding yes. Yes. Unequivocally," Jones told ESPN. "I think we've had adversity. We very easily could have more adversity ... Yes, I think if we use the experience of what we're having in the season, then we're going to be playoff ready. But I sure do think that what I see out here right now is the team like that you could go get a Super Bowl with."

You've heard it before, right? Like every year for the past 15 or so years? The Cowboys put together a good regular season, have all the star power on paper, talk a big game, then dip right out of the playoffs.

Last year, with little competition, Dallas cruised to the division title, then bowed out in the Wild Card round courtesy of Deebo Samuel, the 49ers, and terrible clock management.

And by most accounts, this year's Cowboys are generally considered weaker than last year's.

The Eagles have beaten both Dallas and Minnesota earlier this season, but the latter half of the schedule and any rematches will be a different ballgame, especially with seasons on the line.

Still, the Cowboys have been pretenders for years, and unless you're a Dallas fan, there's never been much reason to think differently.

And for what it's worth, somehow the Vikings always come up with a clunker the second they're taken seriously.

Odell Beckham Jr. could be back in the division next week, it may just be a matter of where.

Per Tom Pelissero and Ian Rapoport at NFL.com, the former star wide receiver is expected to meet with the Giants and Cowboys after Thanksgiving about potential deals as both teams continue to gun for the playoffs.

Beckham, 30, is nearing the end of his recovery from an ACL tear he suffered while playing for the Rams in their Super Bowl victory last February. The likelihood is that he won't be as explosive as he used to be when he comes back, and probably won't be anywhere near the one-handed catching mega star he was for a bit in his first run with the Giants, but he could still very well be a pass-catching threat that will at least command some respect from a lot of secondaries.

Dallas has been pretty open about their interest in Beckham and the receiver has been around the Giants' facility this past month lending credence to the idea of a possible reunion, though offers from elsewhere could also be in play.

After the upset over the Eagles last Monday, the starting quarterback job in Washington became all Taylor Heinicke's and it will stay that way even when Carson Wentz recovers from a broken finger.

The job is his to lose, per NFL.com's Ian Rapoport, but it doesn't seem like he will.

Since filling in for Wentz after Week 6, the Commanders have looked like a different, much more competitive team under Heinicke, winning four of their last five over the Packers, Colts, Eagles, and Texans. And their only loss in that span, to the Vikings on November 6, was near upset.

Taylor Heinicke seems to get emotional after being named the starting QB moving forward for the Commanders @wusa9 #HTTC pic.twitter.com/rS8ero8rhc

Washington is last in the NFC East yet somehow very much alive still.

And Carson Wentz has once again fallen out of favor with another team.