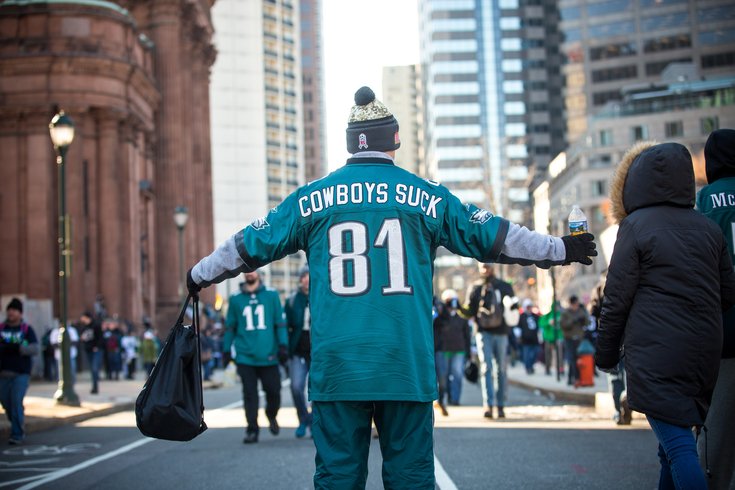 Michael MacLeod of Norristown, PA, wore what a passer-by called, 'the greatest jersey I've seen all day,' to the Benjamin Franklin Parkway for the Eagles championship parade, Thursday, Feb. 8, 2018.

With the whole sports world watching, Jerry Jones fell flat on his surgically-repaired face at the NFL Draft over the weekend, reinforcing just how far the Eagles have pulled ahead of the Cowboys – and how much better a sports city Philadelphia is than Dallas.

Over the past calendar year, the Eagles have hosted the best outdoor draft in American history, have leapfrogged past all three of their NFC East rivals, have vanquished the hated New England Patriots in winning the Super Bowl and hosted an epic championship parade that declared an official end to the city’s underdog status.

Eagles fans believed it would have been a perfect ending to this magical 12 months if the NFL had followed its original plan and hosted the draft right back on the Art Museum steps last weekend.

Who could have predicted that an even sweeter scenario would unfold in dreary, dumb Dallas?

Jones is one of the worst owners in sports, an egomaniacal, selfish, clueless blowhard who hasn’t won a Super Bowl in 23 years. Jimmy Johnson, the coach responsible for the three championships that Jones won in his first seven seasons in the NFL, fled the boss’s side at the first opportunity, leaving the owner to fail spectacularly ever since.

No one could have ever imagined after the NFL handed the draft to Dallas that the Eagles would be the gold standard of the league, authors of a story so improbable, so extraordinary, that no other city could hope to upstage them, let alone the moribund Cowboys or their sad little city.

From the very first moments on the stage Thursday night, it was clear that Dallas would be no match for Philadelphia as a draft host. There was nothing – not one thing – about the Dallas draft that topped the Philadelphia event.

And then there was the crowd, segregated up front by rooting interest – as if the fans could not be trusted to intermingle. Last year, one of the highlights of the Philadelphia draft was the light-hearted jousting between rooting interests. Did the NFL forget that? Or was this just another stupid idea by Jerry Jones?

Feel free to compare the greetings Roger Goodell got when the commissioner marched to the podium to declare the start of the draft. Dallas squeezed out a guttural boo, but nothing like the earthquake provided by Philadelphia a year before. Advantage, Philadelphia.

If rolling out two fools like Drew Pearson and Michael Irvin to beg the Cowboys to draft a wide receiver was supposed to add some humor to the event, it fell far short, too. Jones picked a linebacker anyway.

And then the next night, when the Eagles finally made it up to the podium for pick no. 49, they provided the kicker to the event. Literally.

David Akers, the best kicker in team history, reminded the fans of everything the Eagles had accomplished in the past year. Then he wielded the fatal dagger.

“Hey, Dallas,” he howled. “The last time you were in the Super Bowl, these draft picks weren’t born!”

At that point, there was only one thing that could have made the moment even more delightful for Eagles fans, and that was exactly what happened next. The Cowboys desperately need a tight end now that Jason Witten is retiring, and Roseman traded to the spot right in front of them to snatch the best player available at that position.

Akers grasped the irony when he announced that the Eagles had selected ... Dallas Goedert. That’s right, the kid’s name is Dallas. The Birds stole a tight end named Dallas from Dallas in Dallas.

Things can’t get much better than that, now can they?

Sixers fans were openly rooting for Milwaukee to oust Boston in the seventh game of their first-round playoff series, but justice was served. The Philadelphia-Boston rivalry – both in the NBA and beyond – is about to get another jolt of excitement.

I need to remind no one that the Eagles just ruined the season of the despised New England Patriots – hallelujah! – and now comes the renewal of one of the best rivalries in sports, albeit after a break of more than a generation.

I covered the Celtics in my hometown of Providence – 40 miles south of Boston – during the Julius Erving-Larry Bird days in the 1970s and '80s, and it was a privilege. Dr. J’s elegance against Bird’s grittiness was a guarantee of high drama every time they faced each other, with their famous fight being the centerpiece of the rivalry.

Even before that, I was a devout fan of Wilt Chamberlain – yes, I was a contrarian even then – when he faced (and often lost) to Bill Russell and amazing Celtics teams of the 1960s. To this day, the Boston broadcaster Johnny Most’s voice bellowing “Havlicek stole the ball!” stings my psyche.

What makes the matchup that begins tonight between the Sixers and the Celtics especially sweet is that our upstart team has a legitimate chance to ruin another season in New England. The Celts finished with a better record, but also without the services of a chunk of their roster – most notably, Kyrie Irving.

Anyone who thinks the series will be easy for the Sixers is not aware of the savvy of Boston coach Brad Stevens and the still-deep pride in the Celtic tradition. Even in their diminished state, Boston is a far bigger threat than first-round victim Miami.

For what it’s worth, here’s my prediction: Sixers in seven games.

And it ends with a twist: “Simmons stole the ball!”

After a harsh exit from the playoffs in the first round, the Flyers managed to make an embarrassing situation even more irritating last week with some tone-deaf comments by two leaders who should know better.

GM Ron Hextall and captain Claude Giroux have never displayed much talent when it comes to talking about the game they both have played so well, but they never plunged to the depths of stupidity that they reached in the days following their ouster by the far superior Pittsburgh Penguins.

From the day he stopped performing masterfully in goal for a decade here, Hextall had demonstrated an arrogance that is becoming harder and harder for his fans to bear. As a goalie, he was elite. As a GM, he is unproven, though somehow he carries himself with a pomposity he never showed when he played.

Asked to respond to the chorus of “Hakstol Must Go!” chants that greeted unpopular coach Dave Hakstol after the Penguins had outscored the Flyers in Philadelphia, 18-6, over three horrific home losses, Hextall dismissed the vitriol by declaring it came from “a minority of the fans.”

How does he know? Two Internet polls I conducted about Hakstol at WIP over the past two weeks had between 60 and 70 percent of the fans wanting him gone. How can Hextall, who rarely even appears in public, be so sure the city still respects the stone-faced coach?

In case a few fans weren’t yet insulted by the GM’s attitude, Hextall then added: “I know more about our coaches than the fans.” Yeah, that should placate the people who spent hundreds (thousands?) of dollars to watch their hockey team get dismantled in the playoffs. Thanks, Ron. Big help.

Giroux is equally clueless when it comes to the basic requirements of a captain. Not only does he find it harder and harder to swallow when the games get more important – he was minus-10 against the Penguins – but he is even more lost when required to explain his failures.

“When it’s not going very well, fans, they … start booing us and stuff,” he said. “That’s when we try to do too much. On the road, we don’t really get that.”

Yup. That was the problem.

The fans responded negatively when the Flyers got squashed by a combined score of 10-1 in the first two playoff games here, they grumbled when Sidney Crosby steamrolled Giroux, and they actually wanted something to cheer about after busting their family budget.

Claude Giroux has scored exactly one goal in the past three seasons in the playoffs, three seasons in which he pocketed a cool $27 million. That comes down to exactly $27 million per playoff goal. The captain needs to shut up and play better, especially when the games mean more.

And his GM needs to remember who is paying his ridiculous salary.

Being a Flyers fan is hard enough these days. The diehards don’t need their heroes, past and present, making it worse.

•  Fans don’t pay enough for the chance to watch sports on television, apparently. ESPN figured it could squeeze an extra $5 a month out of us on a new app that will feature exclusively the terrific 30 for 30 documentary series and a lot of other junk no one wants to see. Meanwhile, Comcast is moving the NFL Network to a new pay tier that will cost fans an extra $10 a month. Sports is my life, and I have this response to ESPN and Comcast. No and no.

•  Maybe it’s just me, but I’m blaming the Phillies front office for screwing up the first month of top prospect Scott Kingery’s career. The rookie has been struggling mightily lately, thanks to the indecision of GM Matt Klentak and manager Gabe Kapler on where to play the career second baseman. Kingery has enough to worry about adjusting to big-league pitching, and now he has had to adapt, on a daily basis, to different positions. With J.P. Crawford and his putrid .188 average on the disabled list, it’s time for Kingery to get a permanent position.

•  Why did so many media people misinterpret the Sixers’ selection of controversial rapper Meek Mill to ring the ceremonial bell last week? No one was endorsing the lyrics or lifestyle of the entertainer. The organization and its fans were embracing justice. Mill was a victim of a corrupt cop and a power-hungry judge, and the Pennsylvania Supreme Court finally gave the rapper what he deserved under law. The fans were cheering for justice. There’s nothing wrong with that.

•  At the risk of overstepping my bounds, I hereby propose the perfect celebrity to ring the bell at Game 3 of the playoff series against the Celtics here on Saturday. Could there be a better choice than the man who crushed the Sixers’ biggest rival at every opportunity during a brilliant (but too short) career? It’s time to bring back the Boston Strangler, Andrew Toney, for the honor, don’t you think?

•  My new admiration for Eagles GM Howie Roseman is a matter of record, but I would be remiss if I didn’t express one tiny reservation about the 2018 draft. In the seventh round, Roseman moved up to pick a player, Jordan Mailata, who has never played football. Mailata is a huge rugby star in Australia – and at 6-foot-8, 346-pounds, huge is the right word. This pick reminded me of Roseman’s first tenure as GM, when he drafted a skier, Jeremy Bloom. Hey, Howie, your team just won the Super Bowl. You have already proved you’re smarter than everybody else. Cool it with the weird experiments, please.