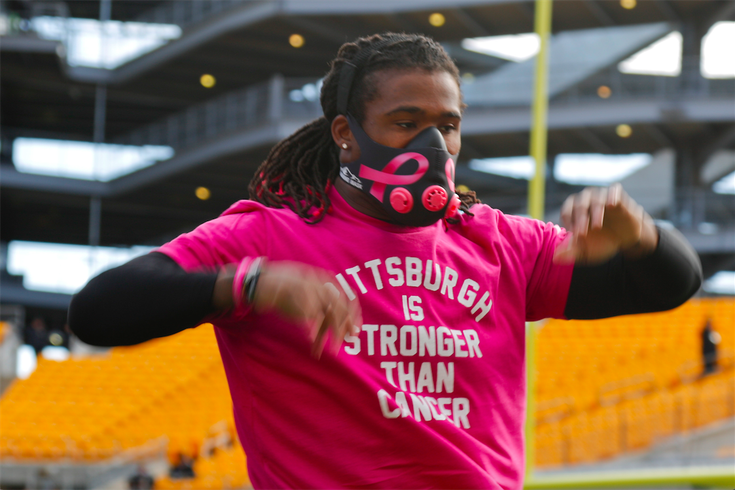 The National Football League doubled down on enforcement of its uniform policy Wednesday, fining two Pittsburgh Steelers for continuing their on-field cancer tributes after they were denied approval to do so earlier this month.

Running back DeAngelo Williams was given a first-offense uniform violation – a fine of $5,787 – for his "Find the Cure" eye black to raise awareness for breast cancer, ESPN reports. Williams lost his mother to breast cancer in May 2014 and says he has worn the eye black for years as a Carolina Panther. He has also died the tips of his hair pink to honor her memory.

Cornerback William Gay was hit with the same fine Wednesday for wearing purple cleats to support victims of domestic violence, according to his agent. When he was just 7 years old, Gay's mother was fatally shot by his stepfather. He has publicly supported causes to prevent domestic violence for years and was recently featured in a PSA that aired during primetime. After practice Wednesday, Gay said he did not plan to appeal the fine.

The NFL's rulings come after another member of the Steelers, defensive end Cameron Heyward, appealed fines totaling $17,363 for two offenses related to a similar tribute. Heyward's father, former NFL fullback Craig "Ironhead" Heyward, died in May 2006 after a battle with cancer. To honor him, Heyward wore the words "Iron" and "Head" under his eyes.

Despite the NFL's breast cancer awareness initiatives in October, which allow players to wear pink uniform items, the tributes by Steelers players were deemed an infraction. According to ESPN, the NFL does permit some eye black messages provided by the league, such as a "Tackle" and "Cancer" freebie that was available to players last week.

Heyward's fines were significantly reduced after his appeal, but he told ESPN he felt it "wasn't the best way it could have been handled" by the NFL.

To continue supporting the fight against breast cancer, Williams said he is purchasing 53 mammogram tests in honor of his mother's age when she died. The tests will be done at a hospital in Charlotte, North Carolina, where he played nine NFL seasons for the Carolina Panthers, and in Pittsburgh.