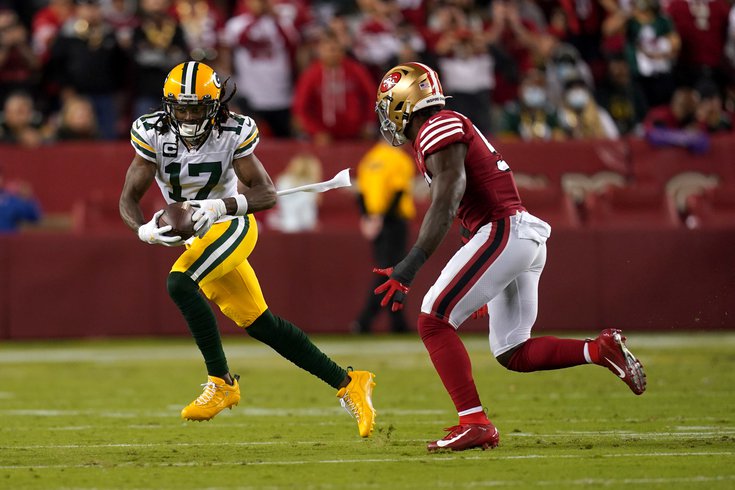 Green Bay Packers wide receiver Davante Adams runs with the ball after making a catch against the San Francisco 49ers.

After a Not-So-Super Wild Card Weekend the NFL will now press on to the divisional round of the postseason.

We'll get our first look at the Green Bay Packers and Aaron Rodgers in the NFC, as well as the Titans in the AFC, after both teams had byes last week. It should come as little surprise that both seven seeds were easily discarded by the two seeds in their respective conferences, but that may give the Chiefs and Bucs an added advantage after getting a chance to tune up a team last week.

Looking at the divisional round odds, three of the four games have tight spreads of no more than three points, with the lone exception being San Francisco getting six points at Green Bay on Saturday night. The Niners were the only road team to advance from last weekend, so this round should provide closer games – making it a tighter window to hit from a betting standpoint.

But don’t worry, there’s still plenty of juicy value on the table. Let's take a look...

The line has already dropped a point, so you missed a lot if you are on the Bengals. The Titans are another story, and you may be able to hold off a little longer and get it down to three. You still have the hook for Cincinnati, but even the money line at only +160 should be telling. Simply put, the books aren’t willing to take much liability on the side of the Bengals winning this game, because the books think there’s a good chance the Bengals can win this game!

The biggest stat that will be thrown at you – as hollow as it is – is that the Bengals have covered five straight games, going 4-1 straight up. Meh. They won at Denver, beat a Lamar-less Ravens team, and beat the Chiefs — OK, that counts for something. But then they LOST at Cleveland, and just beat a confused Raiders team. You can rest assured the Titans will cover this game at home, you can even push an alternate spread to -4.5 for even money.

Aaron Rodgers and the Green Bay Packers have won an astounding fourteen of their last fifteen games at home. It's tough to bet against that...and Rodgers...and Lambeau Field. It’s been a fun story for the Niners – especially after watching them dismantle the Cowboys – but they may ultimately just be a tune-up for Rodgers.

The biggest question the Niners will have to answer in this game surrounds not only stopping the Packers QB, but also doing it again and again. It’s part of what makes slowing down the Packers offense so difficult each week. The best play in this game is staying under the total. Green Bay saw an even 4-4 O/U record at home, and the Niners just grounded the Cowboys in Dallas. We get a decent break with a 6.5-point gap between 47.5 and the top key number of 41. Meaning, most games end on 41, so we have a cushion of two field goals. Ideally this number would be at 48, so a touchdown would simply push, but we do get some room.

I don’t hate laying the six points either, I just have way more confidence in the total. The Packers – and Rodgers – have covered the spread in four straight divisional round games.

Any big win in the NFL will always allow the letdown factor to creep in and insert itself into the locker room. We see it in the regular season all the way through the Super Bowl. A team does all it can to secure a win the previous week and then looks shot (or simply not themselves) the next time out. So, ask yourself this question, which quarterback – Matt Stafford or Tom Brady – stands a better chance of letting the pressure get to him?

Lay the three points as the Bucs offense can keep up with anyone. Their defense got the biggest boost from beating up on the Eagles, whereas we still have questions as to who will be back for the Rams. Arizona was atrocious — they looked like the Jaguars on Monday. If anything, the Rams got a false sense of confidence by beating up on a division opponent who came out utterly unprepared to play football. While the Eagles also looked that way, the Bucs still didn’t have the benefit of seeing Philadelphia twice beforehand, and two times each year. Brady is as sharp as we’ve seen him and continues to show how easy it is for him to throw guys open.

The Bucs will easily win this game, which should open a couple of plays here. First, lay the points, even an alternate spread up to -6 points. Second, take both QB overs in passing yards – Brady will throw to get ahead, and Stafford will throw more when they are down. Finally, jump on Stafford to throw an INT, as we know he’s good for one late in the game.

This total is too high, that’s the first thing that jumps out. The other is that the Chiefs are getting a huge benefit with any line less than 4.5-5 points. Kansas City has struggled to cover larger numbers at home, but should be fine here. Andy Reid continues to stress how sharp this team needs to get on offense, which we saw on full display against the Steelers. The Chiefs don’t suffer anything close to letdowns after big wins, and destroying Pittsburgh got them an early jumpstart on the playoffs. I think playing in the first round was the best thing possible for the Chiefs – they needed more time on offense and to continue to test their much-improved defense.

The money line is -130 for a Chiefs team that’s won seven straight games at home. This line is full of recency bias because of what the Bills did to the Patriots, not really factoring in how good the Chiefs looked. It’s a trap to get you to bet the Bills on the money line, one that I refuse to fall for in any capacity. I will take the Chiefs -130, the under 55, and over Travis Kelce receptions and receiving yards. Buffalo can’t just walk in and beat up on Kansas City like they did in week 5, as things have drastically improved for the Chiefs offense.