Despite her youth, Jesselyn Silva hopes to carve out a bigger space for women in boxing 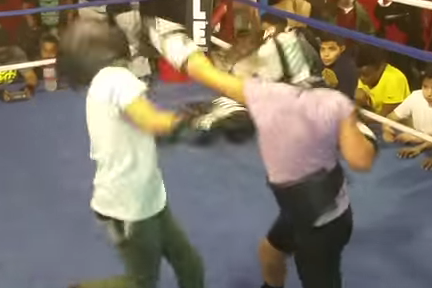 Jesselyn boxes a young boy in front of onlookers at a New Jersey gym.

If most of us were asked to describe the profile of an aspiring boxer, a nine-year-old, 74-pound fourth grade girl would probably be nowhere in the vicinity of our preconceived notions.

But that's the case for Jesselyn Silva, the Bergenfield, N.J. girl who's spent the last two years training for an opportunity to compete at this year's New Jersey Golden Gloves, an annual amateur boxing tournament that will be held next month, according to NorthJersey.com.

Jesselyn's introduction to boxing came as a result of her father Pedro's plan to shed some weight. Without a babysitter to watch his kids, Silva took Jesselyn and her little brother with him to an Edgewater gym while he got in his training and workouts. Unwilling to remain on the sideline, Jesselyn convinced her father to let her try boxing, and the interest blossomed ever since.

The road to recognition of women's boxing has been long and arduous, partly because of convention, partly because of a preference for martial arts and partly because of rising health concerns. USA Boxing, which governs the amateur ranks, didn't lift its ban on sanctioned women's matches until 1993. The first Olympic event didn't come until 2012, when American Claressa Shields won gold in the middleweight division.

Still, Jesselyn has been swinging away. After training at three different gyms, she finally settled on a Hackensack location, where she can learn from four other likeminded girls, all of whom are teens. The biggest challenge for Jesselyn is finding appropriate opponents. She's held her own with boys her age, but doesn't always get the credit she deserves from them.

In her one sanctioned fight to date, Jesselyn came out victorious and earned a championship belt that now hangs at the gym where she trains for two hours after nearly every school day. In the video below, Jesselyn spars with a young male competitor, landing a solid hook at around twenty seconds in.

“When I won my first match, it felt so good when they put up my hand because it was like my first match and I’m undefeated, but it’s only one fight,” Jesselyn told WTKR. “I can’t wait for my next fight.”

Whether or not that will be at New Jersey Golden Gloves remains to be seen, but as far as Pedro Silva is concerned, he won't stand in the way of his daughter's dedication. As far as he can tell, she he has no desire to quit any time soon.