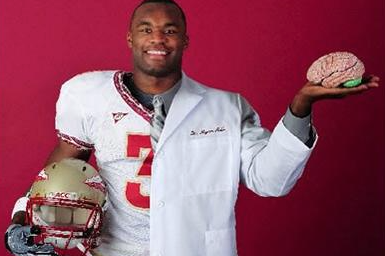 Read More
The odds of catching on at the NFL level are so low for most college football players that the story of rejection is by now familiar to us. Not only do shows like Hard Knocks painstakingly follow an NFL team's roster evaluation process, but even the most talented of college athletes are warned ahead of time to have a firm backup plan in mind.

Myron Rolle, who grew up in Galloway Township, N.J., stands as something of an anomaly, however. The former defensive back at Florida State University wanted to simultaneously pursue a career in medicine while preparing for the rigors of an NFL career. When he decided to accept a Rhodes Scholarship to study medical anthropology in London, he didn't foresee it, but his prospects to make it in the NFL took a hit.

In a recent profile for SBNation, Rolle's case is examined at length to consider how his dual devotion to scholarship and football may have signaled to NFL scouts that his commitment to football was unacceptably less than total. Despite maintaining his intensive training regimen, his eventual selection in the 6th round of the 2010 NFL Draft, still an incredible achievement, marked the beginning of the end for Rolle as a pro football player.

Up to this point, everything Rolle had done was with two careers in mind, one after the other. To him, there was nothing about an NFL career that would prohibit him from being a successful neurosurgeon, and vice versa. But once he arrived in the NFL, it became clear to him that his Oxford choice was not a false one. One could have either football, or a life without the game, not both.

The profile is a worthwhile read, as it explores the challenges associated with pursuing a dual track that will best utilize talents to attain life goals.  The piece suggests that Rolle's intellectual side became a deterrent for NFL teams who regarded his wish to later practice medicine as a flaw in the present. Rolle became critical of the NFL's mercenary culture and lack of team loyalty that defines college athletics, but his time in football says as much about the demands of the NFL as it does about his idealism.