New Jersey and Pennsylvania rank higher than the national average of 91.1 percent 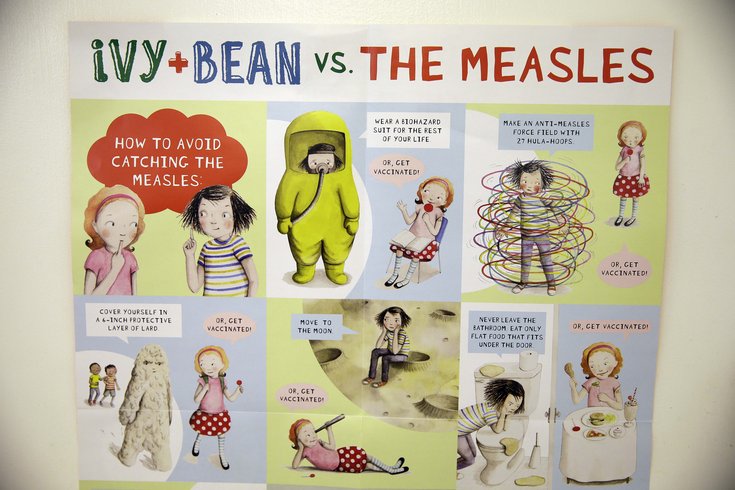 Poster educating parents and children about measles is displayed at the Tamalpais Pediatrics clinic Friday, Feb. 6, 2015, in Greenbrae, Calif.

Both New Jersey and Pennsylvania rank higher than the national average for their rate of preschoolers being vaccinated against measles, a report by Trust for America's Health found.

For individuals who haven’t been vaccinated, there’s a 90 percent chance of becoming infected with the measles if in contact with someone who has the virus, which is first marked by a runny nose, fever, cough and achiness followed by a spotty, itchy rash, the CDC reports.

The national average is just over 91 percent.

Among the 50 states and Washington, D.C., the top four for preschooler measles vaccination are New Hampshire; Washington, D.C.; North Carolina and Massachusetts, the report found, while 17 states have rates lower than 90 percent, though none of them are in the Northeast.

The U.S. Centers for Disease Control and Prevention recommends children receive a first dose of the MMR vaccine when they are 12-15 months old and a second dose between the ages of 4 and 6. The rate of preschooler vaccination is typically lower than that for school-age children since preschoolers aren't yet in the school system.

In January 2015, the CDC issued a health advisory amid an ongoing multi-state measles outbreak that has been linked to more than 102 cases in 14 states so far.

Prior to routine vaccination, measles infected approximately 3 to 4 million Americans, killed 400 to 500 individuals and led to 48,000 hospitalizations each year.

In 2000, when cases dropped to around 60, the virus was declared virtually eliminated in the United States.