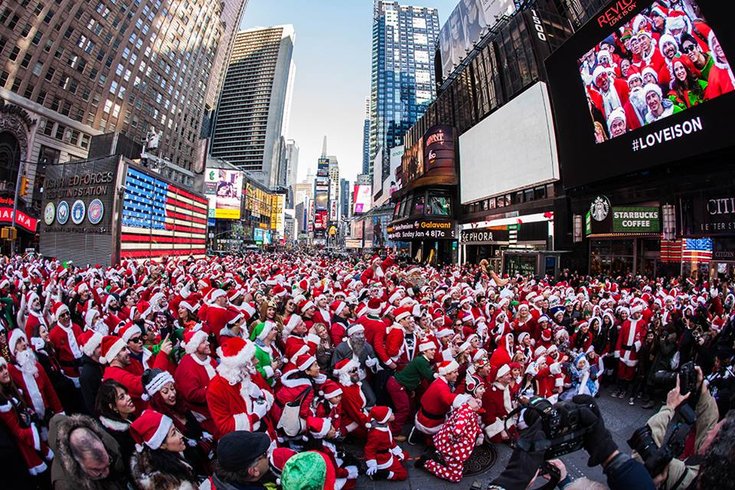 In preparation for the extra jolly Santas headed to SantaCon in New York, New Jersey Transit has banned beverages on all trains, buses, and light rails this weekend.

NJ Transit's move is in line with similar protocols put in place by the Long Island Railroad and Metro North, though those lines only banned alcohol. NJ Transit took it a step further by banning liquids altogether.

Saturday, Dec. 8, is New York's annual SantaCon, the biggest event of the nationwide tradition wherein people take to the streets, usually after a few drinks, dressed in a Santa suit or some other kind of festive garb and bar hop. Saturday is also Philadelphia's similar all-day Santa bar crawl that kicks off in Old City.

Though Philadelphia also has its own SantaCon on Dec. 15, the New York event attracts many from the tristate area who wish to be among the thousands to flood the streets of Manhattan.

The New York SantaCon begins early this Saturday, at 10 a.m., and officers will be on hand at Penn Station to make sure out-of-town Santas aren't smuggling booze in their gift sacks.

Though the rest of New York's transit is enforcing the no-booze-onboard rule for a set time throughout the weekend, NJ Transit is taking much stricter precautions, maybe because they've seen one too many plastic Wawa cup filled with what is clearly beer.

In a statement to Gothamist, an NJ Transit spokesperson said the service has "found in the past that many people have alcohol in water bottles and cups."

Because of this prudent observation, NJ Transit will ban drinks on the first trains of Saturday all the way through the last trains on Sunday. Violation of the temporary rules will result in a summons for an open container violation and a fine.

So, whether you're dressed as Santa or not, beware ... even if you're just drinking a crisp La Croix while taking the NJ Transit this weekend.