The Montgomery County wedding destination and country club is working on an upgraded, three-story property with 21 hotel suites 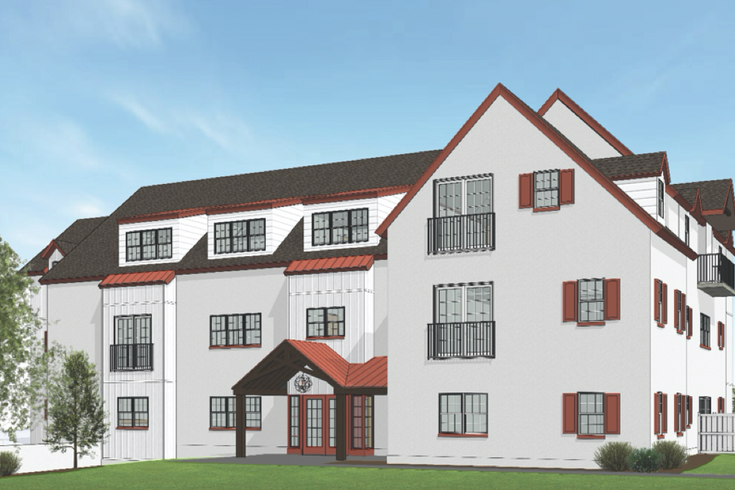 The rendering above shows the new carriage house under construction at Normandy Farm in Blue Bell. A fire on March 8, 2021 destroyed the historic structure at the upscale Montgomery County hotel and country club.

Normandy Farm, one of Montgomery County's premier wedding and hospitality destinations, is putting the finishing touches on a $5 million project to rebuild a carriage house that will replace the original, 19th century structure destroyed by a fire last March.

Hanson Properties, the family-owned company that runs Normandy Farms Hotel and the Blue Bell Country Club, announced this week that it will open the reconstructed carriage house next March. That will mark two years since the historic, nine-room guest house was engulfed in flames on a windy night, nearly wrecking a couple's wedding that weekend.

The March 4 blaze ripped through the carriage house along the 1400 block of Morris Road, part of the sprawling 210-acre estate that includes an 18-hole golf course, fine dining, ballrooms, conference halls and a hotel with more than 140 guest rooms. At the time the fire began, a couple was staying on the first floor of the carriage house ahead of their wedding. The building site is adjacent to Normandy Farm's main hotel.

"We saw smoke and I started running," Caitlin Kerezsi, the bride that weekend, told 6ABC at the time.

Firefighters who responded to the scene just after 8 p.m. rushed into the building and were able to retrieve the family's belongings before the flames got out of control.

"The dresses were in there and the firefighters did an incredible job," Kerezsi said. "They got everything out. Got the dresses out, my brother-in-law's suit, luggage, money for tomorrow, they got it all out."

The carriage house ended up being a total loss due to extreme fire, water and heat damage. Centre Square Fire Company Deputy Chief Bill Messerschmidt told The Times Herald in Norristown that the fire produced heavy smoke and was exacerbated by the building's cedar shingles and the wind conditions that night.

NFEC volunteers responded to this fire call last night. We are glad we could save everything for the wedding and that Normandy Farm can still be open for business! https://t.co/MKEpkmVzxl

There were no injuries reported in the fire and the wedding went ahead as planned, despite the frightening disruption.

Whitpain Township Fire Marshal Dave Camarda told PhillyVoice on Thursday that the fire was caused by a cigarette that ignited inside a plastic smoker's outpost, which had been moved from a safe location away from the carriage house and was left leaning up against the building. The flames climbed the exterior and then entered before consuming the whole structure.

"That's the first time we've seen a fire caused in that way," said Camarda, who added that cigarettes generally cause fewer fires these days, since most buildings prohibit indoor smoking. Camarda credited Hanson Properties with maintaining Normandy Farm, which he called an important piece of Whitpain Township's history. The fire, which took more than an hour to bring under control, was ruled accidental.

Construction on the new carriage house began in July, with a red and white theme and several upgrades. The three-story building will span 18,268 square feet and will feature 21 suites, bringing the hotel's total room count to 153. The building also will have all-new furniture, art, carpets and rustic wall treatments. Select suites will have private porches, patios and fireplaces, while the exterior will have a terrace and fire pit.

Normandy Farm has roots in the 18th century, but began to take its present-day form in 1834, when its former owner developed The Franklin House tavern on the land there. The inn offered food and lodging on the newly built State Road that ran between Norristown and Doylestown in Bucks County.

The carriage house became a prep area for horses by the turn of the 20th century.

In 1873, a portion of the land was purchased by Philadelphia businessman William Singerly, who called it The Record Farm after the Philadelphia Record newspaper, which he purchased four years later. Singerly built some of the structures currently standing on the property, including its 200-foot-long and 50-foot-wide barn — the largest in the country at the time.

The present-day Normandy Farm name came from the subsequent owner, Ralph Strassburger, who was inspired by his honeymoon in France. The prominent, white stucco walls that now surround the hotel and country club were constructed in the 1920s.

The last renovation at Normandy Farm took place in 2017 in the main hotel, featuring $1.7 million in upgrades to the interior hotel rooms.