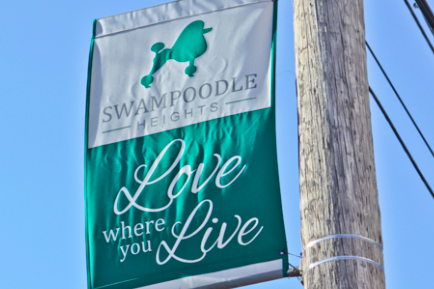 Decades of historical development and demographic shifts have a tendency to leave their mark on neighborhoods. Whether in the context of gentrification debates or in recognition of impermanence, the lost landmarks and social environments of yesteryear are often lamented as signs of disintegration or outright erasure.

In the latest of edition of its Every ZIP Philadelphia series, WHYY's Aaron Moselle takes a look at the North Philadelphia neighborhood once known as Swampoodle, a quirky name that the Department of Records traces at least as far back as 1926. The neighborhood, which stretches from about 30th and Hunting Park to 24th and Allegheny Avenue, was previously home to Connie Mack Stadium, one-time home of the Philadelphia Phillies.

What was previously neighborhood comprised of Italian and Irish immigrants dissipated as a result of de-industrialization and the expanded settlement in Philadelphia-area suburbs. Today, the area is made of predominantly African American residents, some of whom have spent the past year attempting to rebrand it as Swampoodle Heights.

Vincent Kennedy, a resident of the neighborhood, has called for a revival of Swampoodle to challenge the loose, homogenous designation of "North Philadelphia."

“It done fell off the map. They done considered everything Strawberry Mansion, which it’s not," Kennedy said. "This is Swampoodle. So why not give us what we need? Give us the righteousness that we need. And respect our name.”

Fellow resident Lamont DeShields, a community garden activist, shared the sentiment and suggested that a stronger sense of identity would help cut back on crime, inspire young people and encourage revitalization without pushing anybody out of the neighborhood.

Both men are joined in their efforts by Denise Whittaker, who co-founded the local Community Action Group and took the lead last year in purchasing about a dozen banners to promote Swampoodle Heights. Whittaker said she added heights in part to avoid the odd connotations of "swamps" and "puddles" that come with the unusual name.

“I’d like some kids to have the opportunity to know what it really is to live in a neighborhood where people know people and people respect people and respect where you live,” says Whittaker.

While it's not clear how much staying power Swampoodle Heights will have, the movement represents and organic push to improve a locale and invest in its long-term potential. Listen to the Every ZIP Philadelphia podcast below to learn more about the community's placemaking goals.