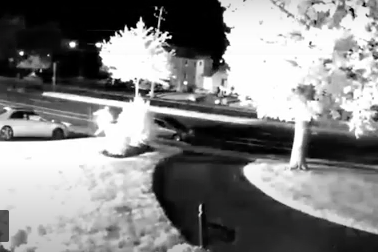 Philadelphia police are searching for a man who allegedly attempted to light a home on fire in Northeast Philadelphia on June 19, 2020. During the incident, captured on surveillance video, the suspect appears to catch fire before escaping the scene.

A man who allegedly attempted to a light a home on fire in Northeast Philadelphia earlier this month was seen scrambling from the scene while covered in flames, police said.

Investigators said an unknown male was seen pouring a flammable liquid on some shrubs next to the residence.

Surveillance footage released by police on Tuesday shows the man light the shrubs on fire, creating a bright flash of flames. From another angle, the man is seen fleeing down a driveway in flames, police said. He then tumbles onto the street, putting out the fire, and escapes the scene in his car.

Police did not say whether the fire resulted in any property damage. It is unknown whether the man in the video suffered injuries during the incident.

The case is one of several arson incidents police are investigating in different parts of the city. Authorities also released surveillance video from a June 1 incident at Kensington Smoke Shop, located at 1816 E. Allegheny Ave. That fire caused heavy damage to the business.

Anyone with information about the Kensington incident is asked to contact the city's Arson Task Force at (215) 446-7875.