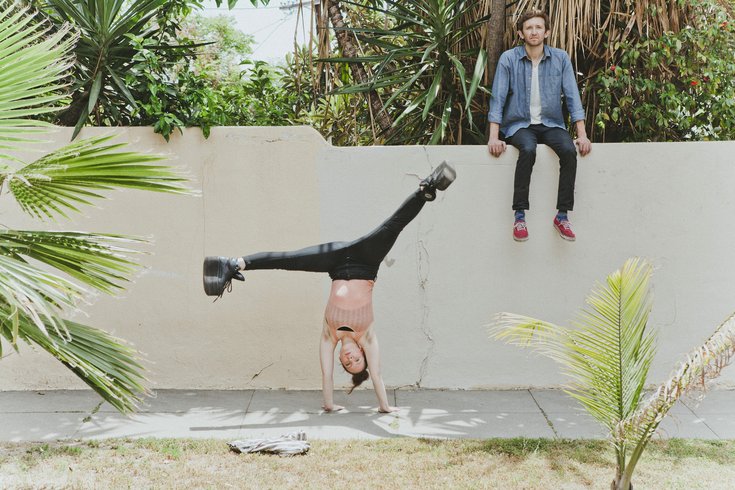 Sylvan Esso wants to give you a single.

You wanted a hit? Ex-folkie electro-poppers and 2014 MVPs Amelia Meath and Nick Sanborn give us a new single (opening lyric: “Give me a new single”) that pointedly equates supposedly vacuous, hyper-commodified radio pop with sex and candy … and smells like them too. It’s the sort of meta pop-song-as-pop-song-critique that could easily come off as meanly snarky, obnoxiously on-the-nose (note the very un-coincidental 3:30 run time) and/or insufferably smug, but Sylvan Esso have too much of a sincere, self-evident sweet tooth to leave such a nasty taste. ’Cause they get the point: When Meath — atop sparkling “Your Love” synths and “H.S.K.T.” bouncy-bass — coos “don’t you wanna sing along?” it wouldn’t mean a thing if the answer was no.

Chronically mopey Swedish songwriter Sarah Assbring turned to Asia for inspiration on her new album “Kokoro” (out this week), immersing herself in Chinese, Thai, Indian and Indonesian pop — while working with primarily Swedish musicians — and the result is the brightest, strangest, most varied and intriguing music of her career. You can stream the whole thing here, but this swirling, shimmering puff of soft-disco chinoiserie is a good taster: a hard-to-define sonic fusion of dreamy Scandinavian indie-pop and Eastern sounds that’s neither straightforward nor superficial, with lyrics that gesture toward the cross-cultural, anti-human effects of global capitalism.

El Perro Del Mar will be kicking off her North American tour on Nov. 9 at Johnny Brenda’s.

While her semi-vaunted reunion with Diplo on the unabashedly silly “Bird Song” makes me a bit nostalgic for their tremendously fruitful heyday together here in Philly, the most immediate standout from Maya Arulpragasam’s new (and allegedly final) album is probably this lightweight, pop-friendly banger. Polow Da Don brings the crunk, Malik contributes a sweetly contrasting, ethereal refrain and ad-libbed outro, and if Maya’s “straight outta Swaggastan” rap verses aren’t necessarily her finest hour — they’re mostly either endearingly dorky or cringably so, depending on your perspective (nice lil Nas quote though!) — her stuttered title hook is oddly infectious. (Curiously enough, M.I.A. was not the only rapper of subcontinental extraction to drop a Zayn-centered single in the last week.)

This inimitable, relentlessly entertaining loose-cannon Detroiter has been relatively quiet in the last few years, save for an eclectic handful of guest appearances (with The Avalanches, Rustie, DJ Spinn) — but that’s about to change when his fourth LP, “Atrocity Exhibition,” drops at the end of the month. Given the kind of forward-thinking electronic circles he’s evidently running in, and especially considering that it’s coming out on Warp, we should be in for quite a ride. This weird, grimy, clangorous production from English beatmaker Evian Christ certainly fits the bill — and Brown is in peak manic/menacing (and typically filthy) form, resulting in a track that’s inventively demented and squirmy on all fronts.

These Norwegian goofballs already released one of the year’s funnest rock ’n’ roll records, the deliciously sweet/scruffy “Pineapple Pizza” — topped with everything from ear-bleeding twee-pop to twangy surf instrumentals — back in March. But they’re back again with another slice: a new four-song EP whose title track unveils a notably cleaner sound, leaning more toward classic rock and power pop than their typical garage. It’s highly reminiscent of too-long-absent Philly throwbackers Free Energy (where are those guys, anyway?) and — not to worry — despite the bloody cover art and (well-deserved!) exclamation point, it’s a decidedly pacifist kind of brawler.