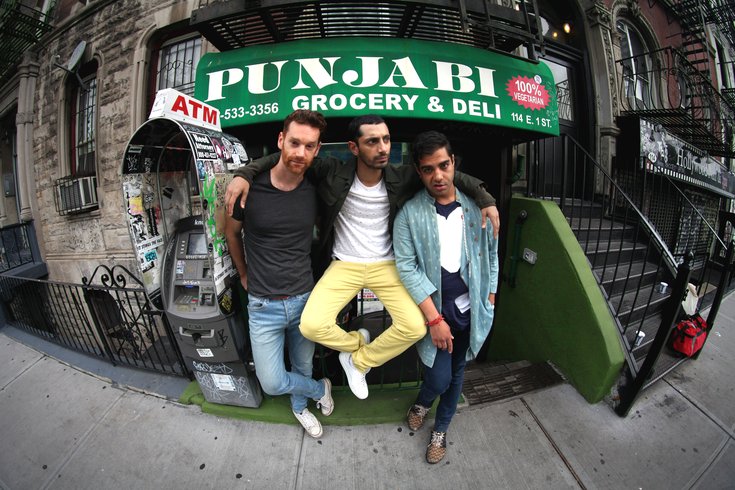 It’s not till more than halfway into their debut LP — a playfully dense, head-spinning affair rife with -geo-political punditry,Desi-diaspora cultural references and spitting game — that this transatlantic duo pauses to make a proper introduction. Over a basic, Eastern-flavored slink from producer Redinho, Punjabi-American MC Heems (formerly of the great Das Racist) riffs on celebrating Hindu holidays with his family, while Pakistani Londoner Riz MC (actor Riz Ahmed) styles himself “the Brown Eddie Snowden.” Identities thus established, the pair adopted a conspiratorial tone familiar from trap-game gangsta rap to tag-team a verse that’s partly glamorized hip-hop play-acting, but mostly real-talk on the distressing pervasiveness of anti-Muslim profiling and surveillance.

A greasy, gospel-touched slow jam from rising Californian R&B auteur Anderson .Paak (weird punctuation his) and the Philly-rooted producer Knxwledge. It’s lush and languorous with just a slight woozy twinge of apprehension, which befits Paak’s vibe of humble, lovestruck awe mingled with slightly self-conscious (and seemingly class-conscious) hesitance: He sounds like he can’t believe his luck, and he doesn’t quite trust it either. It’s like Drake … except not really.

These Columbus OH indie-rock veterans — frontman Lizard McGee has been leading various iterations of Earwig since the early ’90s — recruit fellow Columbian (and Now Hear This alumna) Lydia Loveless for some rip-roaring, no-frills heartland power-pop. It’s a smart move; McGee’s slightly reedy tenor turns out to be a satisfying foil to Loveless’ force-of-nature voice, especially when they team up for the bridge. The song is a total blast.

You can catch Lydia Loveless at WXPN’s Free at Noon this Friday at World Cafe — or at Milkboy on Friday, Nov. 11.

These baggy, shaggy Aussie dance-rockers, zealous acolytes of the first and second Summers of Love, kick off their second album (well, after 90 seconds of prefatory steam-building) the way the Chemical Brothers used to wind theirs down: with a self-contained, shapeshifting mini-epic that starts soft and folky before blowing wide open. In this case, we begin with some sleepy, strummy sun-dazed psych-pop — which might be deep or dopey, depending on your mindstate — that swells and billows until it finally bubbles over in a headrush of perky, starry-eyed, acid-rave euphoria.

Jagwar Ma play the Foundry at the Fillmore, also on Friday, Nov. 11.

The subtle, painterly deep house soundscaper, who operates out of a rustic cabin on the south Baltic Sea, traverses familiarly warm and wintry terrain on his typically gorgeous new album, “Mare” (his second only if you discount 2014’s lovely, lengthy “EP” “Young Alaska,” which you should definitely not do), but with a broader, richer palette of organically-sourced and field-recorded sounds — check the curious, atmospheric percussive crackles here, and the layers of mournful strings and magisterial organ that drift in and out of the mix. It also finds him incorporating his own voice into his productions for the first time; in this case sighing an elusive, fragmentary phrase hovering just at the edge of comprehensibility (“I wanna…[?]”) which functions as both a sort of shy, tech-pop-ish vocal hook and a hushed hymnlike incantation grounding the track’s soft, suffusive spirituality.